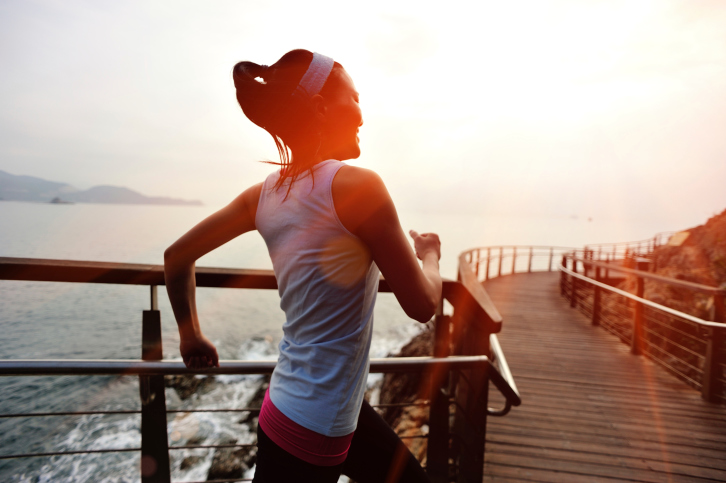 If you’re a smartphone owner looking to leverage the power of your iPhone or Android phone to make better decisions about your health and fitness, you’re in luck. As of the first quarter of last year, the number of health apps available on the Google Play Store and the iOS App Store surpassed 100,000 health apps, more than doubling in just 2.5 years, according to a Research2Guidance report published last year. And the count of apps has undoubtedly gone up significantly since then.

But with thousands of health-related apps at your fingertips, your odds of scrolling through the App Store and choosing an app that’s actually going to work for you in the long run — much less one that’s going to offer the prospect of some real results and benefits — seem similar to your odds of winning the lottery.

A major factor that contributes to the problem is the tendency of most health apps to, paradoxically, eschew science in trying to help users improve their health. Many apps don’t employ scientifically proven methods of helping users change their habits and improve their behavior.

In an article titled, “How behavioral science can advance digital health,” Sherry Pagoto and Gary Bennett of the University of Massachusetts Medical School wrote that behavioral science research has produced “myriad data on health behavior change strategies and leveraged such data into effective human-delivered interventions to improve health.”

But that data so far hasn’t been applied widely to digital health technologies — like smartphones, apps, wearable sensors, and even social networks — which could more widely impact public health if developers and consumers had a better understanding of how they actually impact our behavior, habits, and health outcomes. So to make the most of even a well-designed health app, it’s helpful to learn some behavioral science basics, derived from the findings of researchers who have looked at what makes for an effective mobile health app.

1. Your health and fitness apps should motivate you

Have you ever enthusiastically started using a new fitness app, thinking that it was the one that would finally get you in shape, but realized after a few days that you had no motivation to continue using it? That’s probably because most health apps don’t use scientifically tested and proven behavior change techniques. David Conroy, professor of kinesiology at Penn State University, analyzed 200 top fitness apps and found that most focus more on teaching users how to do an exercise than on motivating them to put that knowledge into action.

Conroy told NPR’s Nancy Shute at the time that his research was published that while apps can collect data points on your performance, “One of the big challenges we’re having as a field now is how to make that data useful. We’re drowning in data points without really capitalizing on them to change behavior more effectively.” Conroy says that creating a good motivational app isn’t simple, and users need different motivation aids to start exercising and to continue once the exercise becomes routine. Many people have trouble maintaining a regular schedule of physical activity, and apps have been “giving people incomplete advice on how to do it.”

Part of the problem is that app developers don’t have much incentive to use behavioral science; the most basic metric for their success is app downloads, not how often you exercise or how much progress you make toward your goals. But especially when it comes to fitness, some create apps, like Zombies, Run!, that effectively gamify your workout to motivate you to keep progressing. Even if a zombie game isn’t your idea of a good time, look for apps that compel you to keep coming back and to make lasting changes to your behavior. And if you’ve found a fitness app you like, but find that it’s a little lacking in motivational techniques, consider using a behavioral-science-based scheduling app — think Timeful, which was just acquired by Google — to get some intelligent help in fitting your workout into your busy schedule.

What we see our friends doing in real life and via online social networks has a significant impact on the decisions we make. So if you’re addicted to Facebook, you might as well use that habit to your advantage when you’re trying to improve your health and fitness. Even as early as 2011, a study on the Harvard Health website explained that ideas and habits that influence our health — for better or for worse — spread through social networks.

In their research, Pagoto and Bennett of the University of Massachusetts found that “social networks which allow individuals to interact and communicate online, thereby eliminating geographical, physical, and logistical barriers, are now being used for health surveillance, dissemination of information and innovations, and health behavior intervention.” The researchers note that so far, behavioral scientists know relatively little about the specific ways in which the relationships we form on different kinds of social networks can be leveraged to promote behavior change. And they write that more research is needed “to understand the factors that characterize effective versus ineffective interactions and relationships on online social networks.”

But Pagoto and Bennett write that the support friends offer each other via social networks has a powerful impact on both healthy and unhealthy behaviors, and can be leveraged to positively impact people’s health-related behavior. Users can learn about and promote health behaviors via social networks, or use social networks as a source of information and emotional support as they change their behavior for the better. So how can you put the theory into practice?

Look for health and fitness apps with a social component — whether that’s an in-app social feed of sorts, or an integration with Facebook or Twitter — to share your goals and progress with an audience. You might find that having an audience, however small, helps keep you accountable, and tracking your own progress is an important component of making changes to your health and your routines. You may also find it motivating if you and a few Facebook friends or Instagram buddies share a goal (or even a hashtag) and stay updated on the progress everyone is making, or the challenges that pop up along the way.

3. Health apps should help you start and stick with a habit

How many habits (or New Year’s resolutions) have failed before they started because they didn’t include a solid plan to keep up the new routine? It sounds like a no-brainer, but a good health or fitness app needs to help you establish long-standing habits. And that includes keeping the app itself engaging over long periods of time.

A researcher in Finland, Kirsikka Kaipainen from the VTT Technical Research Centre of Finland, wrote last year that the appeal of mobile apps for stress management and healthy eating tends to be short-lived. Kaipainen wrote, “Applications can contribute to improved well-being and provide support for behavioural changes as long as they are simple, attractive and easy to integrate into everyday life. However, the societal impact of the applications may remain small unless real-world implementation, maintenance and dissemination are planned from the very beginning of the development process.”

Kaipainen conducted six studies on online and mobile apps, and found that less than 10% of the almost 200,000 users of the apps studied remained active users. “The design of the applications should be clear and user-friendly, support small daily actions that result in immediate benefits, emphasise self-improvement and reflection, and offer guidance while maintaining freedom of choice.”

You should look for apps that will not only keep you opening the app, but keep you engaging in the behavior or habit that you’re trying to establish. A key way that apps can help you to make a healthy new habit stick is with smart, personalized alerts. Alerts and push notifications can take into account contextual circumstances like the time or place, respond to your behavior, or appeal to your competitive side. Intelligent apps can create feedback loops to help you form addictive habits, and The Next Web’s Max Ogles reported last year that savvy app developers are creating alerts that act as triggers for a health or fitness-related behavior.