How to Use Facebook Messenger and Its 5 Core Features

Facebook is continually adding new features to its Messenger communications app, taking on the makers of all kinds of other apps in its mission to get you to use Messenger for every kind of interaction you have with your friends. The effort is paying off, and Re/Code’s Kurt Wagner reports that Messenger has grown significantly over the past six months and now has more than 600 million users worldwide. Messenger’s growth famously received a massive boost when Facebook removed messaging from its core app, forcing users who wanted to exchange private messages with their friends on their mobile devices to download the app.

Facebook chief executive Mark Zuckerberg explained to users — who were upset that they needed to download yet another Facebook app — that the split would make it easier for the company to build products for Messenger as a standalone app rather than as a feature within Facebook’s main app. Messenger’s recent addition of video calling to its platform is one such product, and follows a series of rapid-fire additions such as peer-to-peer payments and the conversion of Messenger into a platform for third-party developers. All of these innovations have been announced since the beginning of 2015.

Wagner notes that Facebook could have built capabilities like voice calls into its main app, but features would consequently get more difficult to navigate to and harder for people to use. The new features that Facebook has incorporated into the Messenger app would also have increased the size of the Facebook app, which would be misaligned with Facebook’s goal of getting people in emerging markets through the developing world online.

So instead, Facebook is building Messenger into a multifunctional communication tool, which Tech Cheat Sheet reported recently Facebook wants you to use for everything. The rapid pace of change in Messenger will likely continue for some time. And while it’s exciting for the app to constantly gain new features, it also makes it difficult to keep up with everything you can do with Facebook Messenger. So we’ve created a guide to tell you everything you need to know about how to use Messenger and its core functions. 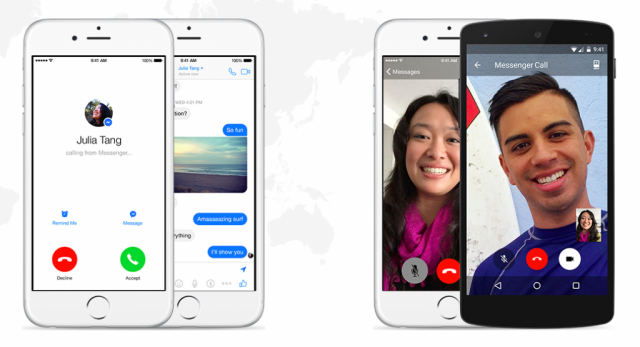 Facebook introduced video calling in Messenger, enabling users to have spontaneous face-to-face conversations with their friends and family members right from the app. ” If you’re messaging with someone and realize that words just aren’t enough,” explains Facebook’s Newsroom post on the topic, “you can simply choose the video icon in the top right corner of the screen and start a video call right from within an existing Messenger conversation.” Messenger’s video calling feature is available for calls made from one mobile phone to another mobile phone, even if one person is on iOS and the other is on Android.

Writing for The New York Times, Vindu Goel reports that the addition of video calling fills a hole in the Messenger service, which has evolved from instant messages sent within Facebook’s social network to a standalone app with numerous features. Goel notes that with video calling, Facebook will seek to replicate the success it’s had with voice calling in Messenger. Facebook first added free voice calling in 2013, but it took off a year ago with a major update that made the feature considerably easier to use. On a conference call to report the company’s first quarter financial results, Zuckerberg told investors that Messenger calls have grown to about 10% of all mobile voice calls globally.

Stan Chudnovsky, Facebook’s head of product for messaging, told The New York Times that the video calling feature was designed with spontaneous calls in mind, unlike services like Skype or Google Hangouts, which are usually used for planned video calls. “We just think we are serving different use cases.” The feature will adapt to the connection on each side of the call, so that calls in locations with weak cellular data networks will be at a lower resolution than those made on a high-speed WiFi network. Additionally, the calls are encrypted and Facebook won’t be able to eavesdrop on them. 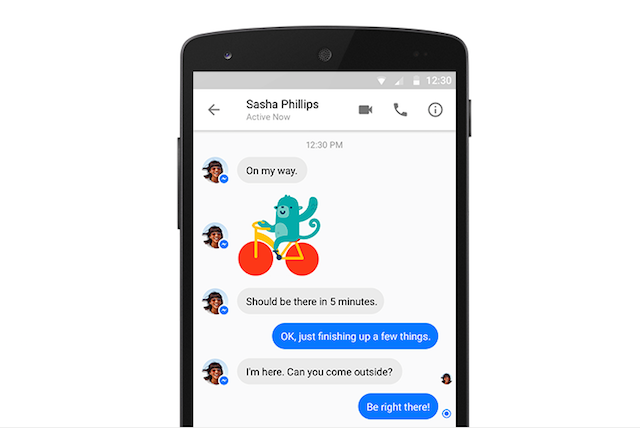 One of the most basic functions of any messaging app is its capability to send simple text messages, and Facebook’s Messenger is no exception. In fact, Messenger grew out of the instant messaging function on Facebook’s social network, and even in its new, mobile, feature-rich form, it retains the ability to send simple text messages. To send a new message, tap the pen and paper icon, type or select the recipient’s name, type your message in the text box, and tap “Send.” 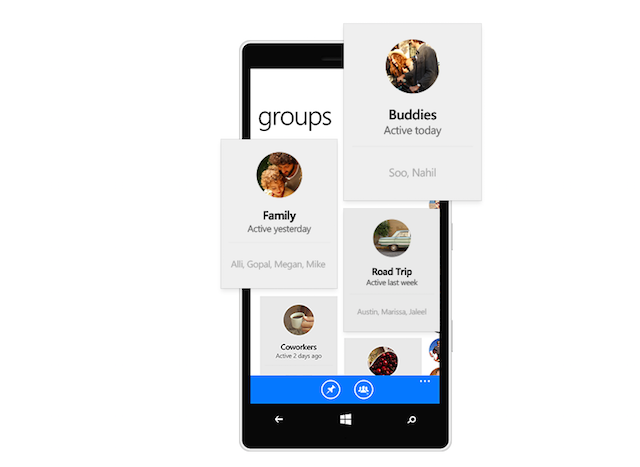 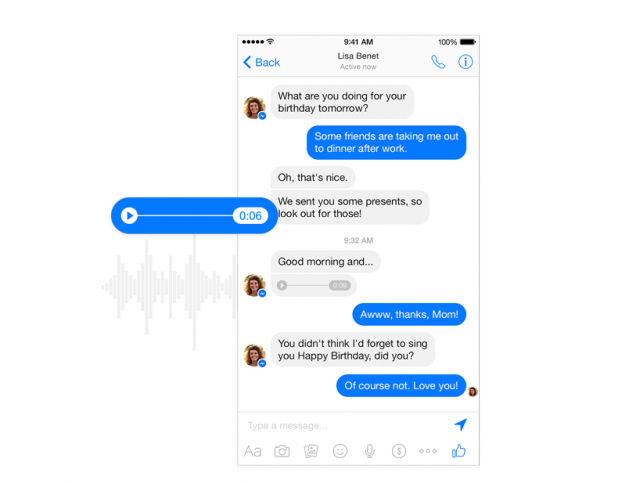 You can add a variety of attachments to a conversation — a photo, a video, or a sticker — or even record a voice message by tapping the appropriate icon at the bottom of the screen while viewing the conversation. You can take a photo or a video directly from the Messenger app, or attach an existing photo from your phone’s camera roll. Facebook’s Help Center explains that you can take and send a new photo or video in Messenger by tapping the camera icon near the box where you’d write a message in a conversation. You can tap “Send” to take and send a photo, or press and hold “Send” to record and send a video. To send an existing photo or video, tap the photo icon near the box where you’d write a message, tap to select a photo or video from your camera roll, then tap “Edit” or “Send.” (If you tap “Edit,” you’ll be able to add text or a drawing to your photo before you send it.

You can record and send a voice message by tapping the microphone icon near the text box in an open conversation. And as a post on Facebook’s Help Center, you can send stickers via Messenger. A sticker is an illustration or an animation of a character “created to help you share how you’re feeling and add personality to your chats.” You’ll need to download sticker packs by tapping the smiley face and then the shopping basket, then tapping the download arrow next to the sticker pack you want to download. Then, to send a sticker, you can tap the same smiley face icon in an open conversation, scroll through the stickers, and tap any sticker to send it instantly. 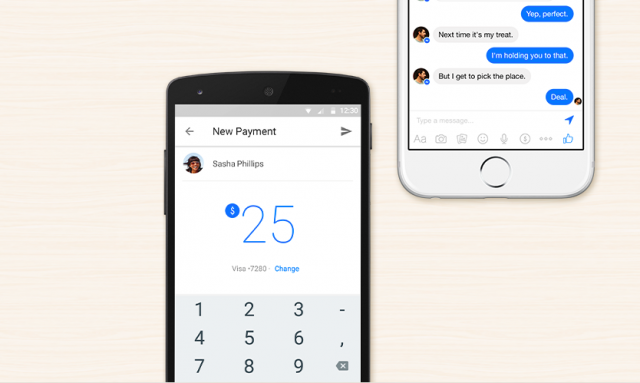 4. Send money to your friends

Facebook rolled out a feature in March to enable users of Messenger to securely send and receive money among friends. Vindu Goel, writing for The New York Times, reported at the time that Facebook’s introduction of the payments feature is anticipated to “cause tremors” in the nascent market for apps that enable users to instantly make peer-to-peer payments. If the payment system succeeds, analysts expect Facebook to extend it to other types of purchases, such as enabling users to buy products directly from advertisers.

Several Asia-based messaging services, like WeChat, already enable their hundreds of millions of users to send money to one another via instant messages. But in the United States, the idea is just beginning to catch on. Venmo, a mobile payments app owned by eBay’s PayPal unit, offers young users a social network to post private or public messages about what their peer-to-peer payments are for. And Square enables users to send payments to one another via email. Snapchat, a messaging app that rose to prominence thanks to its ephemeral messaging capability, also enables user to send cash to one another via a partnership with Square.

Steve Davis, the Facebook product manager in charge of Messenger’s payments feature, told Goel that Facebook wanted to simplify the process of sending money to a friend as much as possible. “We know that conversations about money are happening all the time,” he said. “But most conversations begin in one place and end in another place.” Messenger keeps the conversation and the payment in the same message thread. So to send money, you just need to start a message with a friend, tap the $ icon, enter the amount you want to send, tap “Pay” in the top-right corner, and add your debit card to send money. To receive money, just open the conversation from your friend and add a debit card if you’re accepting money for the first time. 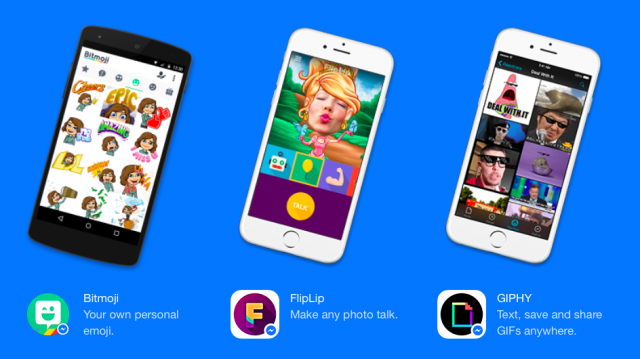 As Tech Cheat Sheet reported in March, Facebook announced at its F8 developer conference that it was enabling third-party developers to create apps that integrate with Messenger. More than 40 such apps were available at the launch of the Messenger Platform, and an app’s content can be shared through private or group messages. The move opens Messenger up to become a diverse ecosystem in the same way that Facebook turned its social network into a platform for games and group conversations.

According to The New York Times, Zuckerberg explained at the event, “Until now, we have focused on improving Messenger by building all of these features ourselves,” but by opening the Messenger platform, Facebook wants to tap into the creativity of other app developers. “We’re really excited about what you all are able to do with these fast and simple tools we are rolling out.” You can now download apps to send GIFs, create personalized emoji, and send other kinds of enhanced messages to your friends.

You can find apps to add to Messenger by opening a conversation and tapping the icon with three horizontal dots. You’ll then be able to see the apps that you’ve downloaded and other apps that are available for you to download.

As the Times noted, Facebook Messenger’s newer features bring it more in line with Asia-based messaging platforms like WeChat and Line, which offer a range of services, from virtual stickers to services to call a taxi or order takeout food, and make the majority of their revenue from those services. That approach contrasts with that of the major American players in messaging, such as Apple with iMessage, Google with Hangouts, and Microsoft with Skype. Each of these has done little to extend its service beyond video conversations. But Facebook is looking to make Messenger into a multi-use communication platform so that, more and more, users won’t even need to leave Facebook’s world to communicate and interact in increasingly diverse ways.