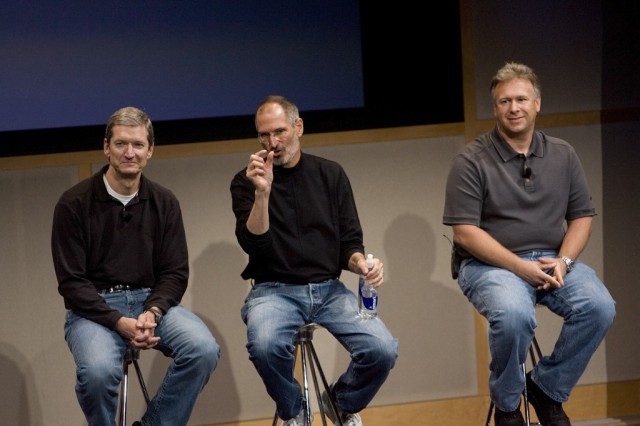 Years after his resignation from his post at Apple and his death, Steve Jobs remains not only one of Silicon Valley’s icons, but a legendary figure whose name still appears regularly in discussions of the company he co-founded. One of the major questions surrounding Jobs’s outsize legacy is whether his successor, current Apple CEO Tim Cook, and the Apple that Cook leads can step out of the shadow of the company’s legendary cofounder — a shadow that looms large with countless ideas and inventions.

As MIT’s Technology Review reports, one measure of Steve Jobs’s legacy is the number of patents that he’s been awarded since his death from pancreatic cancer in 2011. In that time, he’s won 141 patents, more than most inventors win during a lifetime. Not only was Jobs intensely involved with the development of the details of many Apple products — a number of which are still being processed by the U.S. Patent and Trademark Office — but it’s in Apple’s DNA to patent every aspect of its products, as encouraged by Jobs. In all, a full third of the 458 patented inventions and designs credited to Jobs have been approved since his death.

As Technology Review notes, the chronology of Jobs’s patent documents chart Apple’s history and its growth from small startup — Jobs’s first patent, filed in 1980 and won in 1983, is titled simply, “Personal computer” — to one of the world’s largest companies — with the patent for the design of the iconic glass cube that forms the entrance to Apple’s flagship store on Fifth Avenue in New York.

However, as Apple flourishes under new leadership, the importance of Jobs’s inventions may be reassessed. While Jobs was posthumously inducted into the National Inventors Hall of Fame in 2012 and is the subject of a traveling museum exhibit called “Patents and Trademarks of Steve Jobs: Art and Technology that Changed the World,” his importance as an inventor is the subject of debate. Florian Mueller, a programmer and patent consultant who has followed the litigation surrounding the iPhone, told Technology Review that many of Jobs’s patents deal with designs, not with substantial technological advances. Mueller notes:

Whether Steve Jobs was a great inventor depends on whether one is prepared to define the term extremely broadly. I’m convinced that if true American inventors like Edison, Bell, and Whitney looked upon Steve Jobs’s achievements and contributions, they would undoubtedly respect the man for what he’s done but they wouldn’t consider him one of their own.

A criticism of Jobs’s vast oeuvre of patents is that his name often appears alongside an array of other Apple employees — indicating that the patented designs and inventions weren’t the work of Jobs alone. Jobs often shares credit for the work of Apple’s more than 80,000 employees. Tim Wasko, who developed the interface for Apple’s QuickTime player and the iPod, told Technology Review that Jobs would give feedback on products and designs and then be credited on a patent. With the concept for a button used on software called iDVD, Jobs “had useful comments, suggestions, and it’s worthy of him being on the patent.”

Another criticism of Jobs’s patents, and the use of their sheer numbers to paint him as a legendary visionary, is that by many estimations, few are of commercial importance. As the large company that it is, Apple has the resources to patent every aspect of its products and many of its small improvements to existing technology. As Mueller implied in his comments to Technology Review, many of the patents granted today — to Apple and to other inventors and corporations — don’t hold the same monumental importance as the iconic innovations that the word “invention” calls to mind.

Inventors can win patents posthumously if the approval process is drawn out, or if attorneys seek continuations — new versions of old patents. Even after Jobs became ill, Apple lawyers continued filing patents in his name every few days, including one for a variation of the Mac’s scrolling bar on October 4, 2011, the day Jobs passed away. His name continues to appear on new patents, some for Apple and some for other companies like Cape Cod-based Savant Systems, which listed Jobs as the lead inventor on a patent application for the idea of using a tablet like the iPad to steer a sea vessel.

Despite doubts that Apple can continue to gain momentum without the genius of Jobs, Apple hasn’t slowed down, introducing new products and increasing revenue. Under Cook’s leadership, Apple announced the Apple Watch and Apple Pay. Annual revenue has doubled to more than $182 billion since Cook took over as chief executive.

Additionally, Quartz reported recently that since Cook became chief executive, he has created as much value in the company as Jobs. Apple’s market cap surged by almost $350 billion through the end of November — a figure roughly twice the size that it was in August 2011, when Jobs’s illness forced him to leave the company.

No company has ever been as large as Apple — and speculation abounds about when or if Apple’s market cap will hit $1 trillion. While, as Quartz points out, Apple’s success can’t be credited to Cook alone, how to quantify CEO performance is an open question. Cook transitioned Apple from a growth stock to a dividend-paying blue chip, and demonstrated a willingness to respond to broad market trends with, for example, the large-screen iPhone 6 Plus.

Many among the tech community, forums of Apple enthusiasts, and industry watchers alike have speculated as to whether Apple can succeed without Jobs. Fears for Apple’s future are often grounded in doubts about Tim Cook, Apple’s current chief executive who rose through the ranks by ensuring that Chinese factories delivered iPhones on time. Cook’s name has never appeared on a patent.

The logic among those who doubt the ability of Apple to continue without Jobs — such as journalist Yukari Iwatane Kane, who recently published a book called Haunted Empire: Apple After Steve Jobs — is that Apple will stall and fall from importance without Jobs’s visionary genius. Kane compares Apple without Jobs to Polaroid after Edwin Land, or Sony after Akio Morita, the geniuses who were behind each company’s “amazing” products.

As Quartz notes, the question of how much credit a CEO deserves for the performance of his company is addressed by influential French economist Thomas Piketty, who says that any efforts to quantify CEO performance is underscored by what he terms the “illusion of marginal productivity.” Piketty argues that in most large corporations, it’s impossible to connect the efforts of a single manager with the performance of the company as a whole.

While the achievements of both Jobs and Cook, accomplished in these leaders’ separate ways, demonstrate that managerial talent and visionary leadership are real and important influences within a company, analysts and economist have found no definitive proof that Tim Cook’s Apple can’t match or surpass Steve Jobs’s Apple, despite the huge differences between the two leaders.

The transition from the leadership of a famed inventor to that of an equally savvy business man is so far shaping up as exactly what Apple needs as it matures into a large and powerful company. While Cook himself may not have Jobs’s ability to mastermind the design details behind each of Apple’s products, it’s for that very task that Apple employees teams of engineers, developers, and designers. And though many of the designs and innovations that patents credit to Jobs may appear in future Apple products, it’s certain that many won’t turn up in a real, commercial product, and will instead simply become more files in Apple’s already incredibly large patent stockpile.

Though Jobs built Apple’s foundation, and supercharged it with the power to become one of the most ubiquitous and well-recognized tech brands in the world, it’s Cook who will carry that company into the future, and who will help Apple and its community of enthusiasts, analysts, and investors come to terms with the fact that not every patent for each big product that Apple introduces will be able to credit Steve Jobs.