The relationship between humankind and the natural world is often tense. People seek to use the earth’s resources and tame the effects of the natural world for more comfortable living conditions. However, nature strikes back, sometimes in unpredictable and devastating ways. This can be especially true at sea. Though technology has long since been able to withstand the unpredictable nature of the ocean, the vast bodies of water have a way of disrupting the calm. The expanse of sea between Australia and Antarctica is perhaps the most well-known for this.

As part of the Southern Ocean, the region’s hallmark wind gusts were nicknamed the “roaring forties” for the prevailing westerly winds that whip around the globe. Unlike farther north, there aren’t land masses to stop the gusts from growing in force. The winds, originally named by sailors who used the route to travel from Europe to Asia, blow between 40 and 50 degrees latitude south of the Equator. The winds only increase in their intensity farther south, and lower latitudinal winds earned the nicknames of the “furious fifties” and “screaming sixties.” It’s part of this section of sea in which the Malaysia Airlines Flight 370 jetliner disappeared and was a factor in why the search area for the missing airplane kept changing.

It would be one thing to sail with such magnificent winds to your back. But the resulting ocean waves present a danger for anyone daring to sail the waters, especially if, like today’s Vendée Globe race, you’re in a one-man sailboat. The passage of time has created multiple versions of an old sailor’s saying, but the following sentiment explains the hurricane-force winds found in the region, “Below 40 South there is no law. Below 50 South there is no god.”

Instead of fearing the waves that come from these immense wind gusts, scientists in Australia are determined to use the power as an alternate energy source. In fact, they’re already providing some energy to Australia’s largest naval base, in the form of giant buoys floating just below the surface of the waves.

It’s a project that has been ongoing since 1999, when Carnegie Wave Energy (based in Perth) began designing its first generation of CETO technology. Now several years later, the team is on its fifth model of the buoys with plans to begin work on the CETO 6 models in 2016. Unlike some other attempts to harness the power of waves, the CETO buoys float a meter or two below the surface of the water, eliminating some of the beating they would take from the surface level power and the joining of the air and water.

Tests are still happening for CETO 5. The company has deployed three of the buoys off the coast of Garden Island in Australia, the site of Australia’s largest naval base, HMAS Stirling. The buoys, which measure about 11 meters (about 36 feet) across, are made of steel and filled with a mixture of salt water and foam to keep them floating near the surface of the water, but not above it. The Economist explained how the buoys create energy: The floating discs move up and down with the wave motions, driving a pump attached to the bottom of each buoy’s tether. The video animation above demonstrates how the process works.

The pump pushes water through a pipe to a power station on Garden Island, and the water’s pressure spins turbines that turn a generator. Each of the buoys can produce about 240 kilowatts of energy, and together the three of them produce about 5% of the energy used at HMAS Stirling. The pressure produced by the buoys also causes the ocean water to become potable, because the force causes the water to automatically go through reverse osmosis, removing the salt and leaving drinkable water. The naval base receives about a third of its water from the process. 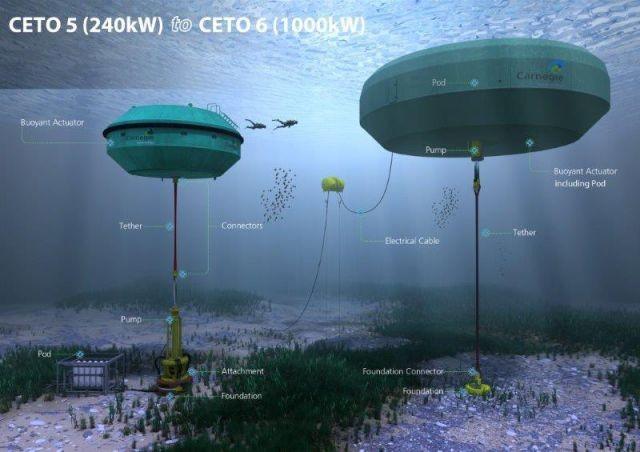 The aspirations for the sixth generation of CETO technology are even greater. CETO 6 models are expected to produce 1 megawatt of energy — more than triple the current abilities of CETO 5. The size of the buoys are almost doubling, too, up to 20 meters or about 65 feet in diameter, because researchers have found the size of the buoy has the largest impact on how much power can be produced. The new buoys will also generate the power within them, instead of needing to be hooked to a pipe on the seabed. (Instead, the buoys will transmit power through a underwater power cable). This will reduce time and setup costs, the company said, and will allow the technology to move into deeper waters while also increasing its commercial market.

Ultimately, the changes in CETO 6 means the electricity could become cheaper. Michael Ottaviano, the head of Carnegie Wave Energy, told The Economist the CETO 5 buoys could likely produce electricity that cost 30 to 40 cents per kW-hour, if produced en masse and placed in “wave farms.” That price is comparable to what diesel costs are now. If CETO 6 buoys could be deployed in a similar way, the cost would likely be about 20 cents per kW-hour. Ottaviano also believes economies of scale could bring that cost down further to 12-15 cents per kW-hour, the same cost of electricity on the grid in the Perth area now, allowing for renewable energy subsidies.

The company believes its wave solutions could be attractive to military bases already on the water and to island countries that import expensive fossil fuels. And though the technology is still in its exploratory phases, the technology could be part of the shift in harnessing the ocean’s power.