How Will Touch ID Change With Apple’s Next iPhones? 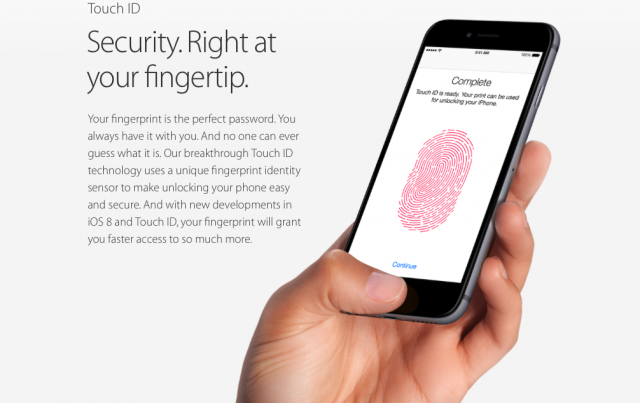 Along with all of the other software and hardware features that are up for upgrades with the next generation of Apple’s iPhone, its Touch ID fingerprint sensor system stands to be updated. By upgrading the Touch ID system, Apple could make the fingerprint sensor more reliable. That would afford users a better experience with features like Apple Pay, which relies on the sensor system to verify users’ identity.

Recent reports indicate that the next generation of iPhones could be updated with the next generation of iPhones to be released later this year. And a recent patent application points to Apple’s longer-term plans for the sensor system, which could in the future be moved from iOS devices’ home button to be integrated into the device’s touchscreen itself.

Apple could upgrade the Touch ID sensor with the next iPhone

KGI Securities analyst Ming-Chi Kuo predicts that the Touch ID sensor will get an upgrade with the next-generation iPhone, according to Apple Insider. The new model of the sensor should improve the user experience with features like Apple Pay. Kuo says that the new Touch ID module will “offer a better and safer Apple Pay user experience by reducing reading errors,” and he expects companies in Apple’s supply chain to accelerate production for the new Touch ID module in the second calendar quarter of 2015. Kuo projects that Touch ID module shipments will grow 12.4% this year to 262 million total.

Kuo expects the sensor to remain in the home button, and doesn’t think that Apple will integrate the fingerprint scanning technology into touchscreens in the near future. He explained, “Though Apple has filed patents for the integration of Touch ID and touch panel, this isn’t likely to bear fruit near term as complex algorithms and sapphire cover lens are also required.” He added, “We therefore don’t see any impact on supply chain momentum.”

Apple might integrate the Touch ID sensor into the touchscreen

While Kuo thinks that the Touch ID sensor will stay in the home button for now, it isn’t expected to remain that way forever. Apple Insider reports that Apple recently filed a patent application describing how future iPhones and iPads could embed the Touch ID fingerprint sensor into the touchscreen display itself. The application, titled simply, “Fingerprint Sensor in an Electronic Device,” describes how the sensor could be integrated into the display stack of the device.

In one iteration, the device would be able to capture a single fingerprint at a fixed location on the display. For example, the iPhone’s lock screen or a third-party app could ask the user to place his or her finger at a specific spot on the screen for scanning. Alternately, the system could go further to scan a single fingerprint at any location on the display, or even simultaneously scan and identify multiple fingerprints to verify the user’s identity. By maximizing the space afforded by the display of an iPad, for example, the Touch ID system could offer enhanced security by scanning all five fingerprints from one of the user’s hands, or even scanning the entire palm print.

As Apple points out in the filing, fingerprint sensors that have been embedded into displays in the past have degraded the image quality of the screen by adding layers over the display. Such systems have also reduced the ability of the screen to sense traditional touch input.

Apple suggests implementing the fingerprint sensor as an integrated circuit that connects to the bottom surface of a cover sheet, placed near the bottom surface, or connected to the top surface of the display. The filing also describes how Apple could place the sensor as a full panel on the display. The full panel fingerprint sensor could also sense touch, which would enable Apple to implement one technology that can both detect touch input and scan for fingerprints.

Apple Insider says that Apple’s interest in an in-display fingerprint sensor technology isn’t new. AuthenTec, the company that Apple acquired to create Touch ID for the iPhone and iPad, has done extensive research on the subject. An AuthenTec patent related to the technology was revealed in 2013, when it was assigned to Apple after the acquisition. Apple Insider’s Neil Hughes points out that both the 2013 patent and the newly unveiled patent filing are credited in part to Dale Setlak, co-founder of AuthenTec. Apple acquired AuthenTec in 2012, and Touch ID was subsequently introduced with the iPhone 5s.