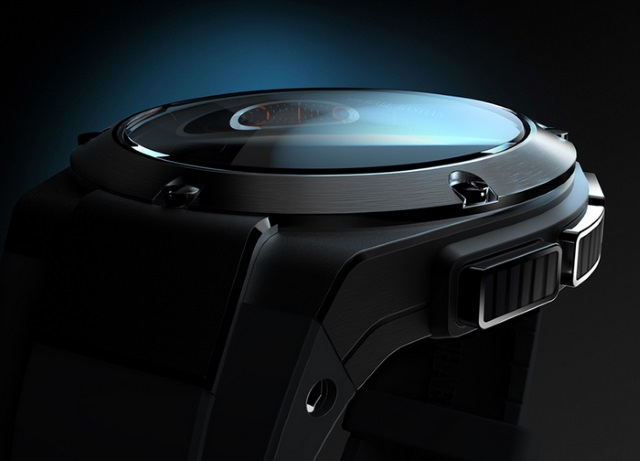 It appears that Apple’s rumored iWatch may not be the only iOS-powered smartwatch to be released this year. As first reported by fashion blog Fashionista, Hewlett-Packard is collaborating with online retail company Gilt Groupe and fashion designer Michael Bastian to create a wrist-worn wearable tech device that will be compatible with both Apple’s iOS and Google’s open-source Android operating systems. Gilt is a members-only online shopping website that offers luxury items at deep discounts, while Bastian is a highly regarded designer with his own label.

According to Fashionista, the project began when Hewlett-Packard contacted Gilt about the idea of collaborating with a fashion designer on an Internet-connected wristwatch. Gilt connected the tech company with Bastian, who provided the device’s luxurious external design, while Hewlett-Packard developed the device’s internals. It appears that Gilt will be handling sales of the device. Renderings provided by Fashionista and Gilt showed several devices that look like conventional luxury timepieces, with leather wrist straps in various styles and colors and a standard circular watch face.

Although Gilt offered few details about the device’s capabilities, Fashionista reported that it will synchronize with an app that will enable users “to receive email and text message notifications, control music remotely and check weather, stocks and sports updates.” In this sense, it appears that Hewlett-Packard’s smartwatch will operate in a similar way to Apple’s rumored iWatch, which is expected to function as a peripheral device to the iPhone. On the other hand, it doesn’t sound like the Hewlett-Packard smartwatch will include any health-monitoring or fitness-tracking sensors like Apple’s iWatch is rumored to have.

Assuming Fashionista’s prediction of a fall release date is correct, it appears that the overall wearable tech market — and the smartwatch market in particular — will be vastly expanding this year. Two Android Wear-powered smartwaches — the LG G Watch and the Samsung Gear Live — recently became available, while Motorola’s Android Wear-powered Moto 360 smartwatch is due to be released later this summer. Meanwhile, according to sources cited by Forbes, Microsoft has been rumored to be developing its own multi-platform smartwatch that will be compatible with iOS, Android, and Windows Phone operating systems.

While Hewlett-Packard’s Michael Bastian-designed smartwatch may not offer the health-related functions that Apple’s iWatch is rumored to have, it does appear to be take a similarly fashion-centered approach to its design. According to sources cited by 9to5Mac, Apple’s iWatch will be “positioned as a fashion accessory” instead of as a health accessory. This rumor was bolstered when it was later reported by Reuters that Apple had hired Patrick Pruniaux, the former vice president for sales at luxury watch brand TAG Heuer.

Most analysts have predicted that Apple’s iWatch will launch in the fourth quarter, soon after the expected release of the iPhone 6 in September. However, according to a research note obtained by Apple Insider, KGI Securities analyst Ming-Chi Kuo suggested that Apple has encountered several manufacturing difficulties with the production of the iWatch that may limit the number of devices released this year to 3 million.