The long winter has ended, and Activision has begun revealing the next installment of the bestselling Call of Duty series. The next game is Black Ops 3, a continuation of the sub-series made by developer Treyarch. A new trailer is out, along with a November 6 release date for PlayStation 4, Xbox One, and PC. From the looks of it, Activision has moved on from the previous generation of consoles, as well as Wii U. Sorry, guys.

The Black Ops 3 announcement comes as no surprise; Call of Duty is an annualized series, so a new installment comes out every year like clockwork. One thing that is different this go-round is that Treyarch had an extra year to work on this game. For years, Treyarch and Infinity Ward have taken turns making Call of Duty games — which meant they each had two years to envision, create, and polish each entry in the series.

Last year, Activision added Sledgehammer Games to the lineup, giving each development team three years to craft its games. The hope is that an extra year’s worth of work will make each game even better. If the new Black Ops 3 trailer is any indication, the extra year did not go to waste. It looks like this game will push the series into new and exciting territory, even if shooter fans have already seen some of the advancements in last year’s Titanfall.

As expected, the structure of Black Ops 3 hasn’t changed too much. It will still have a single-player campaign and a robust multiplayer mode, plus a version of the zombie mode that has appeared in all of Treyarch’s recent installments.

The biggest change to the formula is how players will be able to move in the game. For years, each Call of Duty game played nearly identically from a mobility standpoint. You could walk, run, or jump, and that was about it. Last year’s Advanced Warfare added a boost mechanism that let you do a quick leap in any direction, including high into the air. From what we’ve seen of Black Ops 3, the idea of added mobility is taken even further here, in a way that looks very similar to Titanfall.

The game takes place in 2060, when militaries have created soldiers with powerful cybernetic enhancements. Since you’re part robot, you’re a lot more nimble now. Gone are the limitations on sprinting — you can now run for as long as you want. You also vault over objects automatically, without ever putting down your weapon or having to press a button. 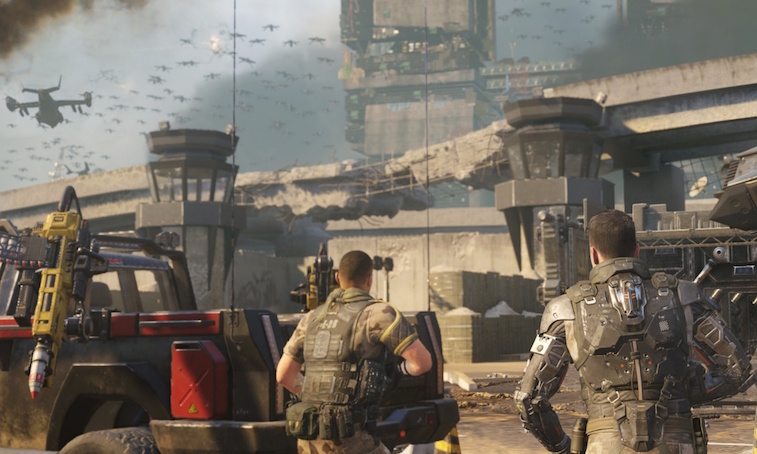 The game has “thrust-assisted jumps,” which are similar to the boosts in Advanced Warfare but feel less jarring when used. You can power-slide on the ground, which gives you a boost of speed and helps you get out of the way of incoming bullets. And just like in Titanfall, you can run on walls now. The idea is that you can string these new abilities together so you never have to stop moving and shooting if you don’t want to.

And here’s the kicker: At no point during any of these new actions do you ever lose the ability to aim down your gunsights or shoot your enemies. If it all goes according to plan, this should add a jolt of adrenaline into an already frantic shooter.

Other new features abound, but we’ll have to wait and see if they have as big of an impact on the gameplay as the added mobility options. For the first time, you can create your own character — male or female — for the campaign. You can also play through the campaign with up to four players cooperatively, or with two players locally.

To accommodate the extra mobility this game allows, the environments are more open this time around, lending some of the multiplayer maps an “arena” feeling. Multiplayer mode also has you choose to play as “specialists” who have unique play styles, along with special powers and weapons you can earn by getting kill streaks.

There’s still a lot Activision has yet to announce about the game, like the details of the campaign’s story and five of the nine specialists. But so far, Black Ops 3 looks like another fine addition to the series, one that brings enough new ideas to make the game feel fresh even if you’ve played other recent installments. For a series that has been at the top of the best-seller list for nearly a decade, that’s a pretty remarkable feat.