The future is here, and it’s in the form of white discs with gray plus signs on them. If Ikea has anything to say about it, USB chargers for mobile devices will soon be a thing of the past. The furniture and home decor giant launched a line of products this month that allows people to charge their smartphones, smartwatches, and other devices simply by placing them on a new nightstand, lamp, or windowsill. By its purest definition, it’s not exactly the Internet of Things, but it will make the movement more seamless, without power cords littering the landscape.

Wirelessly charging furniture is the next step in the evolution of wireless technology, meant to blend in with your home’s natural surroundings. The Ikea stock photo above, for example, includes four wireless charging stations. The charging pads can be placed anywhere in the home or can be built in to your existing furniture. (The company is even selling drill bit extensions to allow you to convert any existing desk or flat surface into a wireless charging station.) “We’ve created a collection that make[s] charging a lot more available, yet a lot less obvious,” Ikea writes on its promotional page for the new products, which were released in Europe in April.

The products are Qi-certified, a growing global standard which means they automatically work with a number of smartphones, including Google’s Nexus phones and several Nokia Lumia phones, among others. Samsung’s Galaxy phones and Apple’s iPhones also work with the technology, but may need special cases that allow the induction charging to occur.

Here’s how the technology works: Coils of wire in the charging plate create a magnetic field as the electric current passes through. That magnetic field can create an electric current in an adjacent coil of wire (in your smartphone, for example) without actually having the wires touch directly. Voila, electromagnetic induction charges your device.

Ikea’s catalogue of new products includes a table lamp (which retails for $70), a few nightstands, and charging pads that can be placed anywhere in the home. Don’t fret if your phone doesn’t normally work with wireless charging, as Ikea is also marketing its own line of cases that allow for the charging with iPhone and Samsung Galaxy smartphones, ranging from $15 to $25 each. 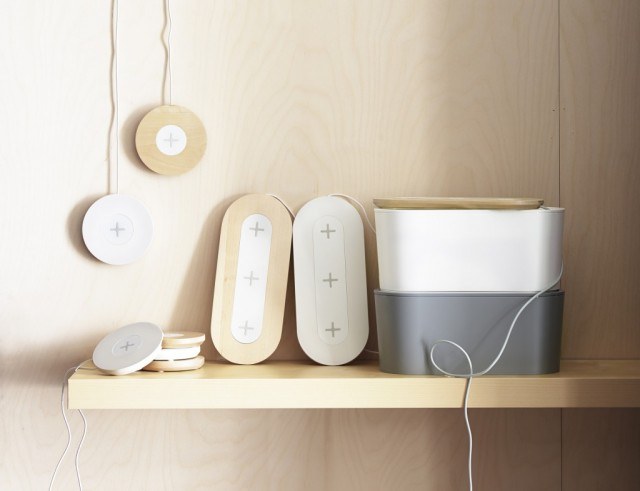 The charging solutions aren’t completely wireless, as each device does have its own power cord. But like most of the products themselves, the cords are white and can easily be hidden against a wall, instead of a tangled mess of USB cords splayed across the floor.

There are still some glitches in the wireless charging industry. Forbes contributor Ewan Spence, who aptly describes the induction charging process, writes that wireless chargers are only about 60% to 70% as efficient as a standard charger in powering up your phone or watch. In other words, it takes longer to get a full charge using a lamp than a USB cable. In addition, it’s common wisdom that it’s still better to charge a completely dead phone with a USB cord instead of wireless charging. (All of Ikea’s new chargers also come with a USB port, perhaps solving this problem altogether.)

In Ikea’s case, one other obstacle to overcome is that most of the wireless charging products aren’t available for sale within the United States yet. Products are available for sale on the brand’s United Kingdom site but can’t be bought online within the United States or picked up at Ikea stores around the country. Janice Simonsen, a spokeswoman for the company, said in an email the products should be available stateside by late spring.

Spence, who is known for his podcasts in Scotland and also for his commentary on mobile technology, wrote that wireless charging is still leaps and bounds above traditional charging methods, and worth the wait. “It might seem that the difference between plugging a cable on your desk into your smartphone and removing it as you leave has the same level of frustration as placing a smartphone on a charging station and picking it up as you leave is minimal; but the difference in comfort, speed, and usability is like night and day,” he said in his article about the emerging technology.

Perhaps the most versatile of Ikea’s new products is the charger that can be outfitted into existing Ikea desks, or placed into any existing furniture using specially designed drill extensions. The Jyssen charger retails for $29.99 and will work in any socket where the drill creates a space. That sort of flexibility weaves the brand’s DIY message into its product lines of the future, ensuring the company’s wares will be useful in any space.

At the very least, it’s a guarantee that the company has secured another generation of Ikea hacks (whether it wants them or not), complete with charging capabilities.