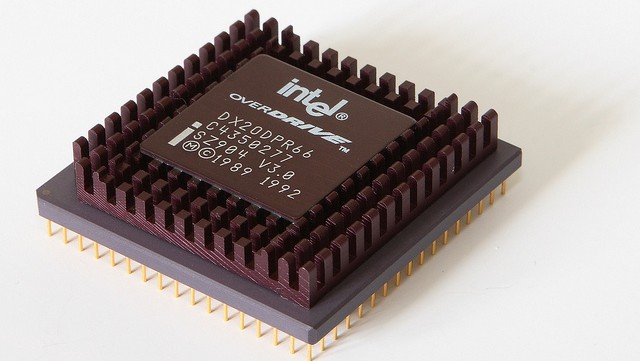 Shares of Intel Corp. (NASDAQ:INTC) appear set to continue a rally that began in February. The stock jumped as much as 3 percent in post market trading after the technology company reported strong first-quarter results. Net income of $1.9 billion, or 38 cents per share, was down 5 percent on the year but beat the mean analyst estimate by a penny — revenue of $12.8 billion, up about 1.9 percent on the year, was in line with the analyst consensus.

The growth, as Intel Chief Executive Brian Krzanich pointed out in the earnings release, was “solid.” PC Client Group Sales came in at $7.9 billion for the quarter, down just 1 percent on the year. The company “shipped 5 million tablet processors, making strong progress on our goal of 40 million tablets for 2014,” according to Krzanich.

“Additionally,” continued Krzanich, “we demonstrated our further commitment to grow in the enterprise with a strategic technology and business collaboration with Cloudera, we introduced our second-generation LTE platform with CAT6 and other advanced features, and we shipped our first Quark products for the Internet of Things.” Internet of Things Group revenue came in at $482 million, up 32 percent on the year. Mobile and Communication Group revenue, however, was down more than 61 percent at $156 million. Data Center Group revenue, Intel’s second-largest unit, increased 4.8 percent to just over $3 billion.

For the coming quarter, Intel is guiding revenues in a range between $12.5 billion and $13.5 billion with a gross margin of 63 percent “plus or minus a couple of percentage points.” R&D and M&A is expected at approximately $4.8 billion. For the year, revenue is expected to come in about flat with 2013 (at about $52.7 billion) and gross margin is expected at about 61 percent, up 1 percentage point from previous forecasts. R&D and M&A is expected to come in at $18.9 billion, slightly higher than previous forecasts.

Intel has faced seriously headwinds over the past several years thanks to the rapidly evolving technological landscape. Competitors like ARM Holdings (NASDAQ:ARMH) and Qualcomm (NASDAQ:QCOM) were able to capitalize on the intense and rapid drive toward mobile technology much more quickly than Intel, which has set the tech giant back a few steps. Aware of his company’s position, Krzanich has made a point of developing and executing a strategy to more effectively compete in the mobile computing space.

ZDNet has reported that Intel is working to get developers in China to use its hardware in their devices, and Intel is laying down a lump of cash to get the wheels rolling. Krzanich detailed some of the plan at the Intel Developer Forum in Shenzhen, where it was explained that $100 million would go into the Intel Capital China Smart Device Innovation Fund. The aim of Intel’s investment isn’t just to get Intel chips put into smartphones and tablets. The company also plans to have Chinese developers use them in hybrid tablet-laptops, wearable gadgets, the Internet of Things, and other connected devices, according to ZDNet.

Qualcomm is responsible for a large number of the microprocessors and systems-on-a-chip in Android and Windows phones on the market today. According to Gartner, it ranked third for revenue in 2013 in the worldwide market for semiconductors with an estimated $17.28 billion, which represented a 31.1 percent growth. Qualcomm lags Intel in terms of scale, but the company is growing rapidly. The introduction of the Qualcomm’s Snapdragon 810 and 808 will likely help the company stay ahead in the mobile processor market, as both will be 64-bit chips paired with impressive peripheral components. Not to mention it will have hard hitting cores and plenty of them.