iPhone 6 and 6 Plus: How Much They Really Cost

A teardown analysis of Apple’s latest iPhones reveals how much the iPhone 6 and iPhone 6 Plus cost to produce, and what you’re really paying for when you upgrade to higher memory capacity. As IHS analyst Andrew Rassweiler noted in a press release on the analysis by its Teardown Mobile Handsets Intelligence Service, the iPhone 6 Plus costs consumers $100 more to buy than the iPhone 6, but costs Apple only $15.50 more to make. In the analysis, obtained by Re/Code’s Arik Hesseldahl, IHS estimated that Apple spends between $200 and $247 in parts and labor to build the iPhone 6, and between $216 and $263 for the iPhone 6 Plus. The estimates include the cost of manufacturing labor, which is between $4 and $4.50 for each phone. Rassweiler noted:

“Apple has always been adept at offering higher-end iPhone models with enhanced, desirable features — and then pricing those versions for maximum profitability. In the past, the premium versions of iPhone offered higher memory configurations for additional profit. While Apple continues this memory strategy, the company is also taking a similar approach with the iPhone Plus, structuring its pricing to add bottom-line profit on models that have a very desirable feature: a large phablet-sized display.”

The 69 and 70 percent profit margins Apple earns on the various iPhone 6 models are in line with other recent iPhone models. The gross margin for the iPhone 5 and the iPhone 5s was about 69 percent, and the gross margin for the iPhone 5c was about 68 percent. But the great thing about a teardown analysis is that in addition to estimating what each phone and its components cost the manufacturer, analysts can reveal what you’re really getting when you pay more for an iPhone model with features like a bigger screen or a higher capacity battery.

When you look at the costs of the following components, it’s helpful to remember that the iPhone 6 models cost between $649 and $849 (without a contract), while the the iPhone 6 Plus models cost $749 and $949 (without a contract). Additional memory costs either $100 or $200 more. For quick reference, here’s a handy chart from Apple for comparison: 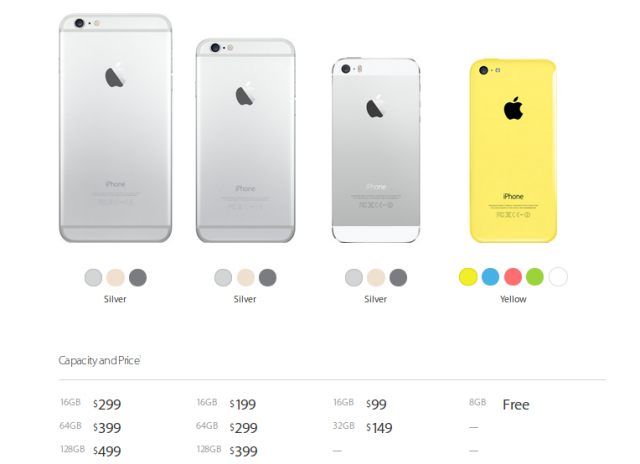 Rassweiler estimates that Apple is paying a price of about 42 cents per gigabyte on the flash memory, which is supplied by a variety of companies, including Micron and SK Hynix. Apple charges $100 to $200 more for models with more memory, but its cost for the additional memory is $47 more for the 128GB versions than for the 16GB versions. The company’s profit margins are slightly higher with the 128GB models — about 70 percent — than with the 16GB models — about 69 percent.

Rassweiler notes that, “While the larger screen is more expensive, it doesn’t account for the entire cost differential between the two phones.” The Plus also carries the higher costs for superior camera and battery subsystems. The camera for the iPhone 6 Plus costs $1.50 more than the iPhone 6.

Bigger batteries: $1.00 more for the iPhone 6 Plus

For the first time, the iPhone 6 and iPhone 6 Plus add a near-field communication chip to enable Apple Pay. The phones include a main NFC chip made by NXP Semiconductors, and a “previously unseen” NFC-booster integrated circuit — which increases the signal’s range and performance — from AMS AG. The NFC chips were part of a category called “user interface and sensors,” which added a combined $22.00 to the iPhone 6 and the iPhone 6 Plus. Other chips in that category include the audio chip from Cirrus Logic and accelerometers from InvenSense and Bosch Sensortec. 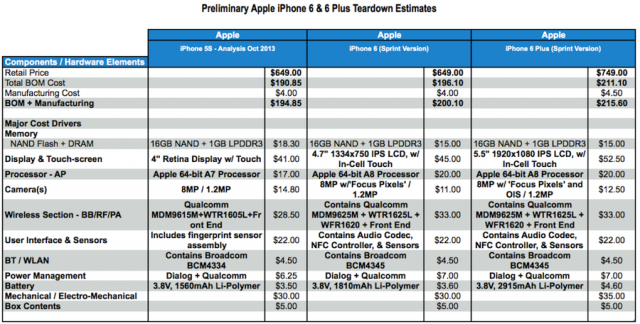 So while the iPhone 6 costs just $200 to make — and the iPhone 6 Plus just $15 more —  consumers pay $100 extra to get the phone with the larger screen. The analysis reveals that Apple’s pricing strategy involves charging a premium not only for higher memory capacity, as it’s traditionally done, but also for a larger display. The analysis also doesn’t take into account the costs of advertising, marketing, and distribution, but when you purchase an iPhone 6 or 6 Plus, you can be confident that Apple’s making a healthy profit on the sale — especially if you go for the phablet-sized iPhone 6 Plus, which sports a hefty markup with its bigger screen and superior camera.

To find out all of the details of what recent teardowns have revealed about the exact components inside the iPhone 6 and iPhone 6 Plus, also check out Tech Cheat Sheet’s recent reporting on an iFixit teardown, which revealed some details on the new iPhones’ parts and components.