iPhone 6s: Will Apple Make It Thicker Instead of Thinner? 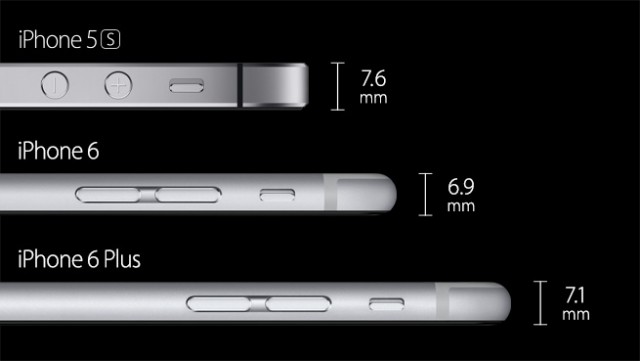 Instead of going for a thinner, more-breakable iPhone this fall, could Apple finally be building a thicker, stronger iPhone? The answer could be yes, according to KGI Securities analyst Ming-Chi Kuo. Neil Hughes reports for Apple Insider that in a research note, Kuo projected that the next-generation iPhone 6s will take several cues from the design of the Apple Watch, gaining not only its new Force Touch input method, but also its custom Series 7000 aluminum. This aluminum could equip the iPhone 6s with a casing that will be up to 60% harder than that of the iPhone 6.

While iPhones have steadily gotten thinner, and more fragile, through the years, many Apple fans have expressed a desire for an iPhone that retains at least a little thickness. The logic is that instead of making the iPhone as thin as possible each year, Apple could go with a thicker body to accommodate a bigger battery, or just to make the phone less likely to be damaged in a fall. Force Touch could finally give Apple a reason to make an iPhone model that’s thicker, not thinner, than its predecessor.

Apple first introduced Force Touch in April with the Apple Watch and with its latest MacBooks. The feature enables users to press harder on a display or a trackpad to access contextual options, which opens the door to newly streamlined and capable interfaces. Kuo said in April that he expects Force Touch to bring the most significant change yet to the iOS user interface with the next version of the iPhone, which is expected to be named the iPhone 6s. Apple’s 7000 Series aluminum was also initially introduced with the Apple Watch, and at the time, Apple said that it had created an entirely new alloy that is 60% stronger than most aluminum but just one-third the density of stainless steel.

Along with the new casing material, Kuo anticipates changes to the color choices for the new iPhone. He expects that the color of the current gold model will look closer to yellow gold, while the space gray will become darker than it is with the current iPhone 6. He also projects that Apple will release a rose gold-colored iPhone this year.

Fans have long debated Apple’s choice to maximize the thinness of each model of the iPhone, and many reiterated with Apple’s latest launch, the iPhone 6 and iPhone 6 Plus, that Apple wasn’t giving users what they really wanted. For many, that’s better battery life. Christopher Mims reported for The Wall Street Journal that the trend toward devices getting thinner and lighter every year has “outlived its usefulness.”

While Mims reports that Apple “would never do this,” because doing so would be “suicidal,” even though smartphones’ dimensions were good enough years ago. The battle for thinner smartphones is about bragging rights, and thinness and weight have become a proxy for good design, even as consumers name better battery life at the top of their wish lists for their next devices. While the amount of time that a smartphone battery lasts varies, activities like streaming and web browsing can cut a phone’s battery life to just a fraction of its rated abilities. Mims writes, “There’s every reason to believe, especially as phones approach a level of thinness that suggests further slimming might make them less durable, that phone makers might turn their attention to the battery next. But only, I think, if consumers demand it.”