Traditional pay-TV providers have been biting their fingernails over Netflix (NASDAQ:NFLX) and other online TV streaming services spurring a movement of “cord cutters,” or people who chose to ditch their expensive cable bills in favor of cheaper online streaming options. 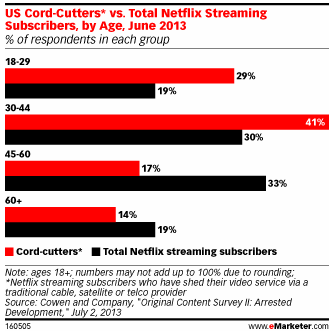 A June 2013 study from Cowen and Company might be reassuring for pay-TV. The study, which was seen by eMarketer, showed that only 20 percent of Netflix subscribers had cancelled their cable or satellite TV services. The study found that cord-cutting was common among young people and the 30-to-44 age bracket as well.

Overall, 40 percent of U.S. consumers currently subscribe to Netflix, according to the study — the majority of subscribers choose to watch Netflix programming on their PCs. That was followed by streaming via a video game system attached to a TV; in third place was watching on a tablet device. 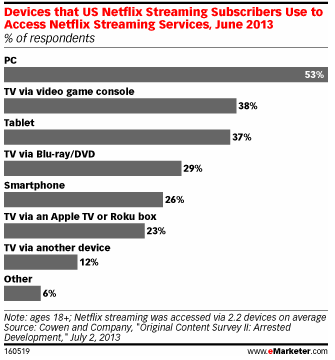 Since Netflix and its competitors don’t report information on viewership or use a traditional ratings system, it has been difficult to judge how consumers are using Netflix. Another recent study, this one from GfK and seen by The Wall Street Journal, showed that the Netflix original series House of Cards hasn’t been performing as well as older series like Mad Men, but that study had a smaller sample size and was conducted in April. The entire first season of House of Cards was released in February, so the show may have had more viewership closer to its release.

That study found that Netflix users watch an average of 5.1 TV shows and 3.4 movies per week, spending an average of eight hours a week using the service. As online TV streaming becomes more popular, pay-TV providers afraid of losing customers and media companies looking to license their content will be hungry for more data on the services and their users.

On Thursday it was announced that House of Cards was nominated for an Emmy in the Best Drama Series category. The nod is a big step for Netflix and other online TV streaming services looking to be taken more seriously in the television world. Netflix competitors Hulu LLC — which is jointly owned by Comcast Corp. (NASDAQ:CMCSA), Walt Disney Co. (NYSE:DIS), and News Corp’s (NASDAQ:NWS) recently independent media arm 21st Century Fox — and Amazon.com Inc.’s (NASDAQ:AMZN) Amazon Instant Video have also been working on original programming.

Hulu itself was recently subject to a fierce bidding war, garnering offers of up to $1 billion, until its owners decided that it was too valuable to sell. Fox and Disney decided they could work out their disagreements on the company’s direction as the online TV streaming market continues to grow.

According to the Cowen study, pay-TV providers like Dish Network (NASDAQ:DISH) and DirecTV (NASDAQ:DTV) needn’t panic over cord-cutting just yet. But it’s clear that online TV streaming will only grow in popularity, and as streaming providers develop original content that is being taken seriously by the television community, the services will continue to encroach on the territory of traditional cable and satellite television.

Don’t Miss: How Is Netflix’s Original Programming Measuring Up?