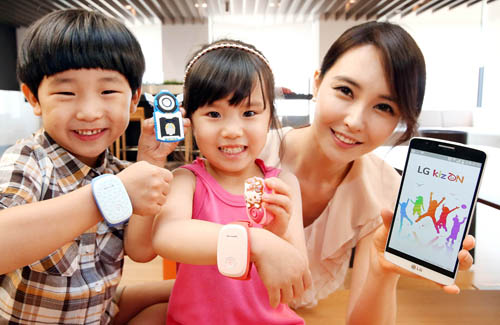 Hello, tracking device. LG’s (NYSE:LPL) newest release is a wearable tracker that allows parents to check up on their children. It even comes with optional Hello Kitty and other character accessories to help encourage kids to wear them on their wrists in the spot traditionally reserved for a regular watch.

The LG KizON is worn on the wrist, but it’s no smartwatch. It’s an even simpler version of the kiddie cell phones of the middle of the last decade on the child’s end. The device allows children to make calls to one pre-programmed number, which will likely be mom or dad’s cell phone. On the parent’s smartphone or tablet, the parent can see their kid’s location on the accompanying app using GPS and Wi-Fi. They can also make calls to their child’s device.

If a child doesn’t answer, the GPS kicks in, allowing parents to see where their kid is. It also alerts parents when the battery life of the device drops below 25 percent, although with a 36-hour battery life, a nightly charge will likely prevent that signal. It’s the ultimate tracking tool for parents for the preschool and younger elementary school set.

The KizON comes out in LG’s native South Korea in July. It will debut in North America and Europe this fall. So far, no price has been listed in any currency for the device.

LG’s product is not the first to allow parents to track their kids. British technology firm KMS created a similar wristband, according to The Guardian. That device also tracks location, but its calling feature is a little different. It allows a series of phone numbers to be input into the device so that it can automatically dial the next number in the event a call goes to voicemail. Last year, FiLip released a kid-friendly AT&T-exclusive smartwatch that parents could use to track their children but allowed them more communication options like texting, reported Android Community.

Like many electronics, while the product is meant for children, the real customers are the parents. They are the ones whose money is used to purchase the devices, after all. The bright pink, blue, and green colors and character accessories draw in the children to get them to wear it, but the tracking and connectivity features are what sell the device for parents.

In addition to kids, both companies suggest these devices could be used to track the elderly, too. That group is often also targeted for this type of device, as evidenced by the Life Alert commercials on American television — although it seems unlikely that many grandparents will opt for the Hello Kitty accessories on their KizON.