Why Too Many Young People Are Afraid of the Internet

The Internet has taken over. For good and for bad many of our jobs, personal lives, and ways of communication depend upon the technology that allows us to send email, Skype with family and friends from anywhere with a wi-fi signal, and stream shows directly from Netflix. The Internet is also ubiquitous: The U.S. Census Bureau released a report in November 2014 that showed as of the year before an average of 83.3% of households owned a computer, and 74.4% reported Internet use in their home.

At work, the numbers climb even higher. A report from the human resources firm ERC shows that 96% of non-union employees access the Internet during the workday. But just because the Internet is everywhere doesn’t mean it’s universally viewed as a good thing. A recent study commissioned by Rasmussen College (not to be confused with the group responsible for presidential polling reports) shows that Americans have a very complex relationship to the Internet, and one that often varies by age group.

Overall, the report showed that the Internet is widely thought to be necessary, though sometimes a necessary evil. Almost two-thirds of the 2,009 respondents (59%) said the Internet was “overwhelming” to them, but 68% said they can’t live without it. The overlap between the two groups was 40% of respondents. But among the most surprising results was that millennials reported they found the Internet to be unsafe at a greater proportion than older age groups in the study. 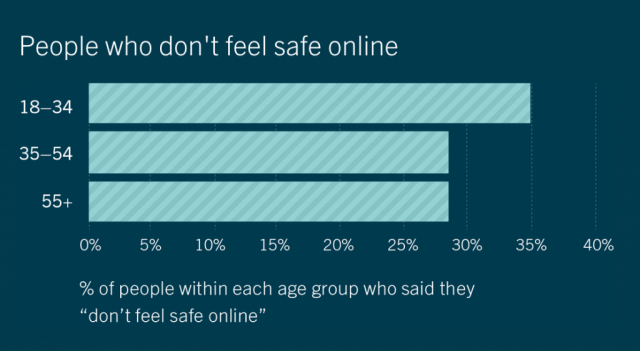 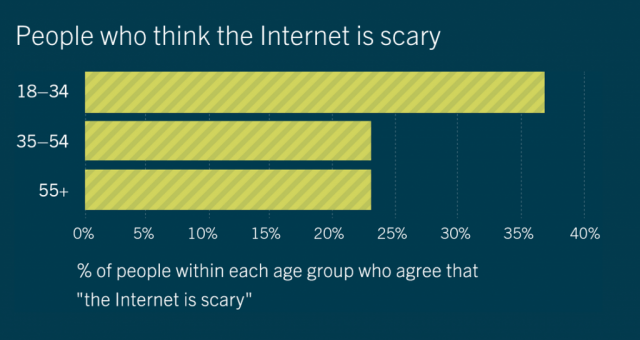 Part of the explanation could be a heightened awareness among younger people of the potential dangers the Internet poses. The FBI believes that half a million child predators are online every day, and about 15 million Americans have their identity stolen each year, in large part because of digital commerce and transactions online. A greater awareness of the Internet’s capabilities — and the abilities of people using it for not-so-wonderful purposes — could play a role in the reason millennials are more hesitant about their safety online.

That’s likely a large reason why millennials are increasingly becoming known for their penchant for privacy, too. It’s a bit of a contradiction, given the age group’s equal love for selfies and Snapchat, but the paradox exists. Younger people might post more personal pictures online, but their views on general privacy policies are a lot like those of older adults. Joseph Turow, a communication professor at the University of Pennsylvania, said in an interview with NPR that teens are more likely to do things they regret in the split-second mistakes of youth. But overall, their perceptions of what happens online are much like those of older Americans. “They may do things they regret, but in the context of asking them about policy, they’re not all that different from older people,” Turow said.

But perhaps the largest concern for young people about the Internet, at least on a professional level, is that they won’t be able to keep up with technological advances. There has always been a plethora of anecdotes about older generations struggling to keep pace with new advances in the workplace, but its possible that the issue is even more pronounced for younger generations who have already experienced the issue.

Numerous reports show that millennials are falling behind in terms of career readiness and skills they will need to succeed in a workplace environment that is more dependent upon robotics, new software, or any range of digital literacy skills. (“Digital literacy,” by the way, is defined by the American Library Association as the ability to “use information and communication technologies to find, evaluate, create, and communicate information, requiring both cognitive and technical skills.”) Based on the Rasmussen study, it appears at least a portion of the workforce is beginning to recognize that problem. According to the report, even a perceived lack of skills greatly affects how millennials interact in their jobs, and how they search for new ones.

Though finding ways to improve digital skills can be intimidating, numerous resources are available for those people who are willing to put in some time. The most common reason people said they didn’t improve their skills (at 39%) was because they didn’t have the time. Another 51% said they either didn’t have money for a course, or they didn’t know where to go for help. At the end of the report, Rasmussen provided links to various video tutorials and articles produced by college staff that help people learn how to be safer online, use digital skills in their job search, and so on.

Among other websites, the U.S. Department of Commerce has a site, digitalliteracy.gov, that provides people with a place to learn the basics and find more community resources available to them. It can be overwhelming to start, but the beauty of the Internet is that while it takes time to master, there are a host of materials online, for free, that teach how to master it.