Of all the media darlings based in Silicon Valley, none have captured an audience quite like Facebook. The social media site that started as a way for college friends to keep in contact now has its tendrils deep in advertising, content sharing, and online payments. The platform has grown from 100 million users in 2008 to more than 1.4 billion active account holders in the first quarter of 2015, capturing an audience unparalleled by any other social media site. As such, the first step of a social media campaign for any other business is normally to create a Facebook page to attract users and fans.

For companies who depend upon sharing content for revenue, such as news sites, magazines, and video content producers, Facebook is an invaluable tool. The site often generates a significant amount of traffic for companies who publish links on their Facebook pages, creating a symbiotic relationship. Facebook needs reputable companies on its site to continue to make it relevant and useful to users. Businesses need Facebook as a way to reach a global audience they couldn’t otherwise dream of building themselves.

In a new initiative unveiled May 12 called Facebook Instant Articles, the social media company has convinced several publishers to produce unique content directly on the Facebook site. The companies don’t require readers to leave Facebook by clicking on a link that redirects to the homepage of that publisher. Rather, Facebook hosts the articles, photos, and videos all in-house.

The partnership with nine publishers, including The New York Times, Buzzfeed, National Geographic, The Atlantic, and The Guardian, is meant to drive Facebook audiences to quality content — an intentional push from Facebook away from cat videos. Last year, The New York Times reports, the company switched its algorithm so that viral content was prioritized less than family and friend posts and news posts that Facebook deemed to be of superior quality. “We see ourselves as first helping people connect with friends and family,” Chris Cox, Facebook’s chief product officer, told the Times. “And second, helping people be informed about the world around them.” 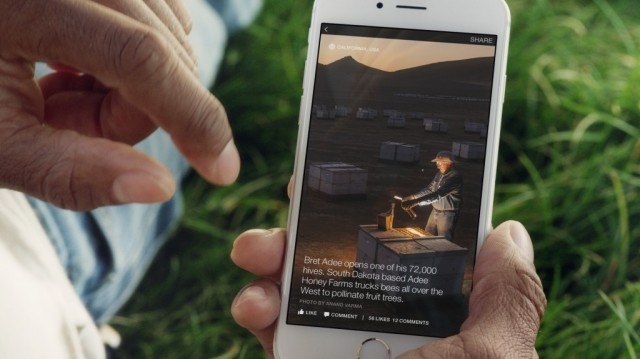 The move is also to apparently speed up load times for content, especially when people access it on their mobile devices. It’s this advantage that Facebook says is one of its main motivations for pursuing publishers so much in the past nine months or so. Under normal circumstances, an article published by The New York Times is hosted by the Times on its own website, and the paper posts an external link on its Facebook page for readers to click. “To date, however, these stories take an average of eight seconds to load, by far the slowest single content type on Facebook. Instant Articles makes the reading experience as much as ten times faster than standard mobile web articles,” Facebook wrote on its blog about the new agreement.

Faster load times means people will often stay on a site longer, key for driving in-house advertising for a site like Facebook. Even marginal increases in speed can make a huge impact on user satisfaction and traffic, Edward Kim, chief executive of analytics and distribution company SimpleReach, told The Times. Kim said Facebook’s driving plan for this agreement could simply be to improve that user experience to keep Facebook users on the site longer, with less temptation to move to a web browser or other site.

The new agreement also opens up a new potential revenue stream for the publishers. If The Atlantic wants to do all the legwork to sell advertising spots in those articles, the company keeps all of the revenue derived from the sales. If they want Facebook to do the hard work and sell those spots, then the company keeps 70% of the proceeds and gives Facebook a 30% cut. Facebook also provides analytics through comScore and other tools for publishers to track who is reading their content, how long they’re staying on articles, and more.

In light of all the apparent perks, what took publishers so long to sign on to the deal? Despite the automatic boosted audience publishers receive — as Facebook will logically boost these posts in more prominent places on news feeds — the companies are wary of how much power Facebook now has over content distribution. Readers are staying completely on Facebook’s network to read their stories, instead of traveling to their websites where they might visit other webpages, or be tracked using the publishers’ own analytics tools. These companies are generally dependent upon Facebook now for tracking readership and distribution of those particular articles, giving up a huge amount of control that companies still had.

Ultimately publications will have to test the waters and see if the relationship is truly beneficial to both parties. Executives like James Bennet, editor in chief of The Atlantic, told the Times they’re keeping their eyes open while entering the deal to make sure Facebook doesn’t take advantage of its position and impose higher fees or less favorable terms if publishers become too dependent on the partnership. For now, however, eyeballs are a driving factor. The Times receives 14 to 16% of its web traffic through referrals from Facebook, it reported, and that figure is more like 25% for sites like National Geographic.

So far, the content is optimized for viewing on iPhones and includes an array of “complementary” displays such as interactive maps and the ability to zoom in on photos that isn’t always an option for publishers on their home sites. As with all nascent agreements, it’s far too soon to say whether the partnership will have other unforeseen consequences. But for now, the allure of a larger readership backed by Facebook’s distribution algorithm is a little too captivating to ignore.