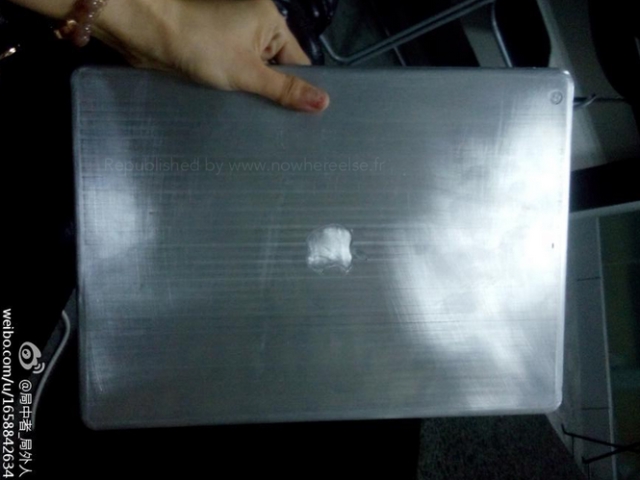 New images that purport to show a prototype rear casing for Apple’s (NASDAQ:AAPL) rumored large-format iPad have surfaced on Weibo, China’s popular microblogging website and a perennial source of Apple supply chain leaks. As noted by Steve Hemmerstoffer from the French tech website Nowhereelse.fr, the casing seen in the image above appears to be an industrial prototype that is only intended to serve as a reference for molding shells and other cases, rather than a finished product. Although it is impossible to determine exact measurements for the casing depicted in the image, it appears to be close to the 12.9-inch tablet size that Apple has previously been rumored to be developing.

Rumors of a so-called “iPad Pro” began circulating last year when Korea’s ETNews reported that Apple was planning on diversifying its iPad product line with a large-screen tablet geared toward the education market. Several months later, The Wall Street Journal cited its own supply chain sources that reported that Apple was testing “screen designs for a new tablet measuring slightly less than 13 inches.” NPD DisplaySearch analyst David Hsieh even predicted that the 12.9-inch iPad would feature a high-resolution display of 2732 by 2048 pixels.

Apple’s rumored plans for a large-screen iPad were supposedly being made in order to stay ahead of Samsung (SSNLF.PK), a competitor that has a tendency to offer its mobile products in as many different sizes as possible. Indeed, Samsung introduced its own oversized tablet with the Galaxy Note Pro 12.2 in January, and the device became publicly available in February.

Needless to say, despite the many rumors and analyst predictions, Apple’s iPad Pro has yet to be unveiled. However, DigiTimes Research — the market research division of the Taiwan-based DigiTimes news site — cited sources in March who reported that Apple had temporarily shelved its large-screen iPad project due to a “lack of support from related platform developers and ecosystems.” For a company like Apple that prides itself on delivering a high-quality user experience, this was not an unbelievable reason to shelve a project. If the apps are not ready yet, then why make a product?

The DigiTimes report was recently bolstered by a research note released by well-connected KGI Securities analyst Ming-Chi Kuo. According to Kuo’s “new product roadmap” obtained by 9to5Mac, Apple will not be releasing the iPad Pro this year. However, like DigiTime’s sources, Kuo believes that the device’s release has only been delayed. “We believe Apple is working on a 12.9” iPad to generate new growth momentum,” wrote Kuo. “But we think this product is unlikely to come out this year.” If the latest iPad Pro rumors are to be believed, then it is quite possible that the prototype casing seen in the leaked photo is genuine.