When Apple kills a product, it does so without fanfare or press announcements. It just silently falls off the site into Wikipedia history. But it’s Apple, so everyone notices, especially when the device that falls off the site is the iPod Classic–the mp3 player that defined its category.

The soul of the original iPod hadn’t changed since its debut in 2001. Steve Jobs stood up on stage, making his revolutionary announcement, saying “You can fit your whole music library in your pocket. Never before possible.” It was a wonderful thing, but the times have changed and consumers aren’t interested in libraries anymore–they want streaming and an all-in-one device that can give them more than just music. But it’s important to remember where we came from. Did you know that there was a time when an iPod had a spinning drive? That’s going to be something interesting to explain to the grandkids. 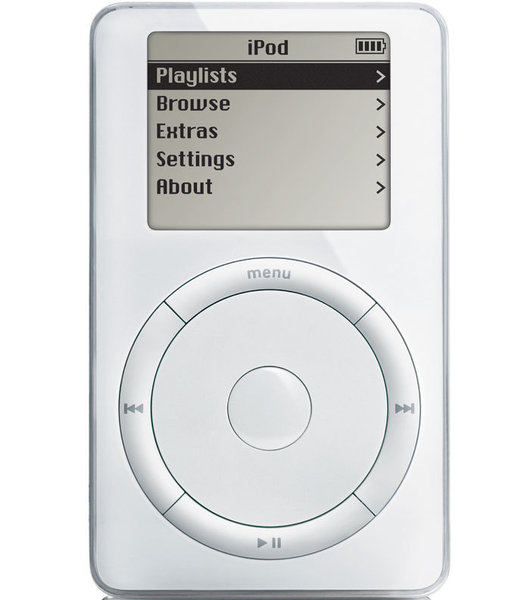 iPod 1st Generation (2001)
Don’t call it an mp3 player just yet, mp3 jukebox was the popular terminology when referring to this device. It came with a FireWire port (not the slim proprietary or Thunderbolt port we know today), AC adapter, and iTunes 2 software, and it was only compatible with Mac OS 9.2.1 or OSX 10.1–no Windows users allowed in this exclusive club house. The iPod was the envy of its peers, M. Wiley wrote in his review for IGN that “Just about everyone–even us poor Windows users–was amped by Apple’s release.”

It was heralded for its minimalist design: an over-sized dial that became the signature of future iPods and five buttons (Menu/Backlight, Play/Pause, Next Track/FF, Previous Track/Rewind, and Enter). Then there was the touch of that light clicking noise when you rotated the mechanical wheel (not touch)–what a nostalgic noise. Navigating through the iPod’s menu screen was just as smooth, breaking up your music selection into several easy-to-digest categories (Playlists, Artists, Songs, Settings, etc.) that you’d recognize on the iPod Classics of today. However, you’d notice a clicking or whirring noise whenever you booted up a song. This noise came from the 1.8-inch hard drive spinning inside.

The screen looked like something you’d find on a e-reader: dim, grey background with dark black text. This display was legible and “undeniably cool” for its time. You could also store 5GB of songs on this device, which would load onto the device in just 10 minutes time. All thanks to the blazing speeds of FireWire, which was much faster than USB.

The $399 price tag and requiring a Mac computer to load up all these songs made the iPod’s cost a little too rich for some people’s blood. But boy did you envy anyone wearing those iconic white earbuds on the train. 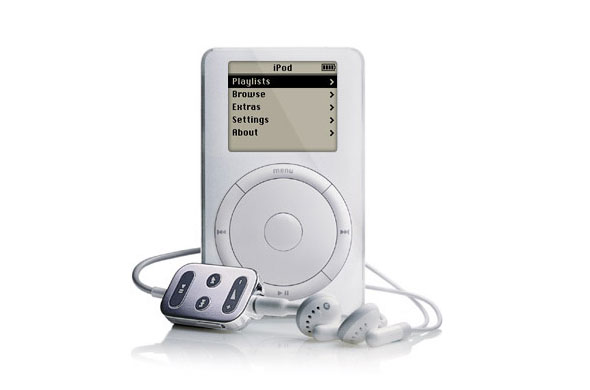 iPod 2nd Generation (2002)
The world’s best music player just got a little better, Steve Jobs said as he took the stage again. The device saw a major boost in its base model capacity from 5GB to 10GB of storage with a 20GB option. But the biggest update was that Windows users could finally get their hands on an iPod without having to commit themselves to a forced marriage with Mac OS. Through the MusicMatch Jukebox software Windows users could now ride in style with those iconic white earbuds. What’s more, you could play a game on the go! Brick Breaker was the only game loaded on the device, and the only game released for it. It wouldn’t be until later on in the iPod’s life-cycle when more common games were available, like Klondike, Vortex, and iQuiz.

This iPod also left behind the mechanical wheel for a touch-capable one. But it still featured the spinning hard drive of the last generation, which you hear clicking the minute you booted up a song from start. This iPod also lacked one feature we take for granted today: if your headphones were yanked out of the jack, the music would stop playing. This feature has saved many of us from embarrassment on the subway with our iPhone and iPod Touch devices, but wouldn’t come to the iPod Classic until later.

The base model sold for the the high price of $399. 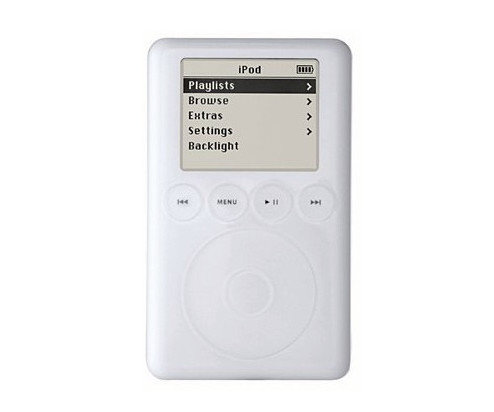 iPod 3rd Generation (2003)
The year 2003 saw some big changes for the iPod. The FireWire port that made previous iPods quite bulky was replaced with the slim proprietary dock connector that’s on iPods and most iPhones (up to the 4s). This latest iteration of the iPod redesigned the bulky Menu, Play/Pause, and Fast-Forward/Rewind buttons, moving them so they sat directly underneath the screen. Windows users would no longer be limited to MusicMatch Jukebox, but had the option to download the latest iTunes 4.1 software, which made it available for both OS users.

Critics would notice a drop in the 10 hour estimated battery life they’d become accustom to in previous generations as Apple swapped out the Lithium Polymer battery for a Lithium-Ion one. 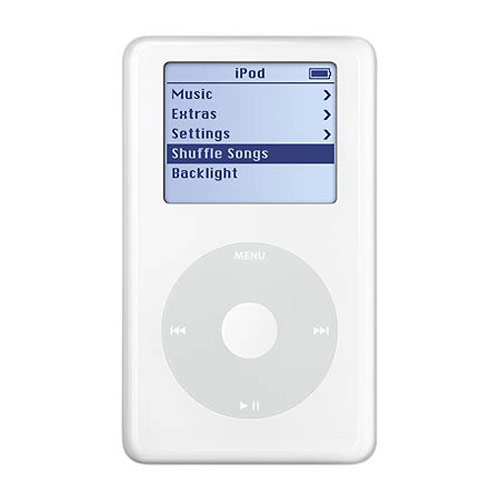 iPod 4th Generation (2004)
The four auxiliary buttons moved on to the scroll dial, underneath the touch-sensitive wheel. The casing got even slimmer and had a longer battery life that was reported at over 12 hours. This iteration used the same Lithium-Ion battery as in the 3rd generation, but claimed its longer battery life was due to the more energy-efficient parts used in creating the Mini. It was rated a 4.5 out of 5 by PCMag’s Bill Machrone, saying his only complaint with the iPod was “EQ distortion problems at high volume.” 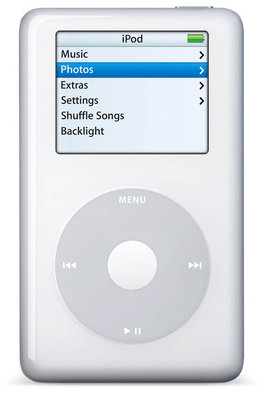 iPod 5th Generation (2005)
The iPod finally moved away from the black and white LCD display to full color. This iPod featured a 2.5-inch 320×240 QVGA display to play videos as well as a few games. The first to be able to provide video playback, which allowed users to watch movies and video podcasts on the go. Videos and photo slide-shows could be played on a monitor using the iPod AV cable. However, you couldn’t use the scroll wheel to zoom or pan in photos.

With larger files making its way onto consumer’s iPods, Apple bumped up the base model to contain 30GB of storage for $299. There was also a 60GB model available for $399. The body was slimmer and the click-wheel was smaller. There was even a color option that wasn’t considered a special edition. Consumers now had the choice of black or white.

iPod 6th Generation (2007)
“It’s time to give it a name: we’re calling it the iPod Classic because it’s the original iPod,” said Steve Jobs at the “Beat Goes On” special event. The name iPod had become synonymous with more than just one device at this point. There was the Mini, the Nano, the Shuffle, and the Touch, which was announced on the same day as the re-branded “Classic.” The iPod Classic—the last of the now dead line–featured a slimmer body and an improved battery life of 36 hours of music and 6 hours of video playback. The front plate had a more sophisticated anodized aluminum display instead of a plastic one used on previous models. Consumers also had Silver and Black color options.

The iPod saw its cheapest price tag yet: 80GB for $249 and a 160GB model for $349. The iPod Touch was announced at the same time for $399 for 8GB, so Apple couldn’t very well ask the same price for a slightly improved iPod Classic. Unfortunately, the introduction of the iPod Touch began the decline of the iPod Classic.

“When we introduced the iPhone in January, we said it was the best iPod ever, and iPhone owners agree with us, it’s incredible with its multi-touch interface, it is the best iPod ever. People have been asking us when we’re going to bring this technology to the iPod,” Jobs said in the 2007 Apple announcement.

Though journalists would speculate every year the iPod Touch gained more sales, every year there weren’t any updates to the iPod Classic that it would be gone from Apple’s Store. Wired predicted its death back in 2013; “Get ready to kiss the click wheel goodbye,” wrote Christina Bonnington in her piece Say Goodbye to the iPod Classic. “This is the year the iPod classic will die.” The death knell was a bit premature, but one that would come the following year.