Rufus Labs Might Have the Biggest Smartwatch Contender Yet 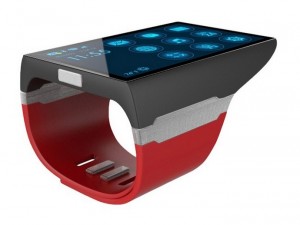 A start-up with an idea, a design, and strong promotional campaign kicked off the smartwatch concept with the Pebble from Pebble Technology in 2012. Others have followed up, including Sony and Samsung, but none of the small form-factor devices have set the wearables market on fire quite yet. Now, another start-up looking for crowd-sourced funding could be trying to pull it off, but at first sight, it’s clear the device from Rufus Labs has bigger things in mind than its predecessors.

The Pebble kept the idea of the smartwatch simple. It didn’t go wild trying to fit full versions of popular operating systems in the device. It kept the screen black and white to give the smartwatch a long battery life. The Pebble could be considered first and foremost a watch — just one with a lot of added features and smartphone connectivity. The ability to receive notifications pushed from a smartphone to the watch was novel and product-defining. Though the Pebble has experienced fringe success, it hasn’t brought smartwatches to the ubiquitous level of smartphones.

Sony also jumped on the smartwatch bandwagon early with its branded SmartWatch. The device went a little further than the Pebble by including a color touchscreen. However, in terms of form factor, it wasn’t too dissimilar. While a touchscreen would allow for more app interactivity, this device also didn’t take off in any huge way. It may have been marred in part by reduced connectivity with devices outside of the Sony brand, though it did support Android devices.

One of the most notable entrants to the smartwatch arena was Samsung last year with the Galaxy Gear, which had a sleek form, ran on Android, and supported the ability to talk and listen to calls placed through a smartphone. A second Galaxy Gear device, simply called the Gear 2. The new model adds a 720p-capable camera, and runs on Samsung’s own Tizen operating system. One trouble with this line of smartwatches is the dependence on Samsung smartphones, which are listed as the only compatible devices on Samsung’s website.

Many other manufacturers plan to develop smartwatches using Google’s (NASDAQ:GOOG) (NASDAQ:GOOGL) Android Wear operating system. Even Samsung has said that it will be making a smartwatch using the wearable-focused operating system, despite its push into Tizen with the Gear line of smartwatches. However, with all this going on in the smartwatch market, Rufus Labs plans to do things differently.

Rufus Labs has designed the Rufus Cuff, which doesn’t quite fit in with the other smartwatches around — nor would it fit into the same space. While most smartwatches are sticking close to the size of a large wristwatch, the Rufus Cuff aims to occupy a bigger chunk of wrist real estate. 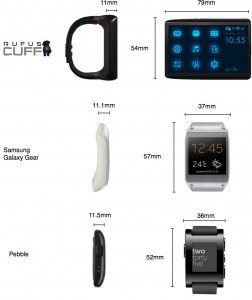 The Rufus Cuff features a 3-inch wide screen with a minimal bezel. It’s easier to think of the Rufus Cuff as a smartphone for your wrist, or a very small tablet, as it lacks mobile network connectivity but has Wi-Fi. The device also includes a full version of Android Kit Kat with access to Google Play’s apps, a full touchscreen, 16GB of storage, GPS, and all of the common components of a smartphone — accelerometers, gyroscopes, and so on. With the ability to do everything a smartphone does with the exception of placing calls over a mobile network — which can be substituted by Voice-Over-IP calling or video chat on Wi-fi — the device appears to not only take aim at the smartwatch market, but also to challenge smartphones.

Like other smartwatches, it will pair up with smartphones via a Bluetooth connection. Of course, it will have the higher functionality, and it supports connection with both Android and iPhone — giving it an edge on the Galaxy Gear and Sony SmartWatch.

The funding campaign was started March 18 and will end April 27. As of April 18, the project had earned more than $146,000 in backing. If funding is met, the Rufus Cuff should be shipping out to backers in September. Though there is no assurance that a device like the Rufus Cuff could take the market by storm — it could easily go the way of the Pebble — it is still a risk for other tech companies eyeing the smartwatch market. There will still be an opportunity to flood the market with smartwatches, as some of the planned Android Wear devices will be available before the end of summer, beating the Rufus Cuff to the punch. In either event, Google benefits.

Check out the Rufus Cuff in the video below: