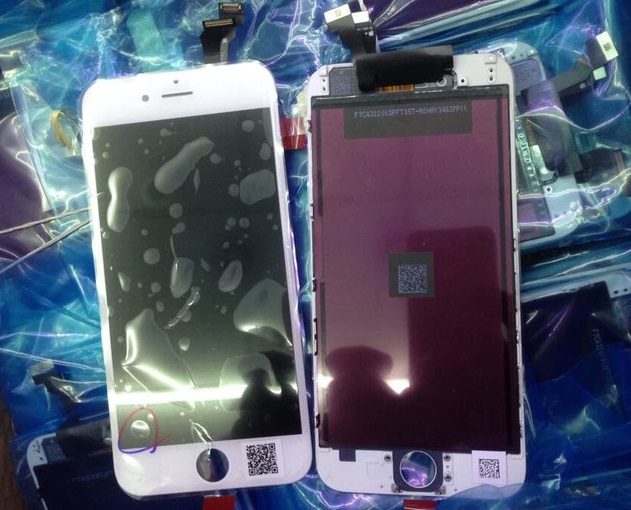 While there has been no shortage of rumors about both of the iPhone 6 models that are expected to be released later this year, most of the information and component leaks have been associated with the smaller 4.7-inch model. Many of the rumors that have been circulating about the 5.5-inch iPhone 6 have been about the various production difficulties that Apple’s suppliers have encountered that may delay its release date or limit its initial availability.

The Wall Street Journal recently cited unnamed supply chain sources who said that display makers were having difficulty making the screens for the 5.5-inch model due to the larger size and the use of a new, thinner type of display technology. Similarly, 9to5Mac cited insider sources who reported that the 5.5-inch model was lagging the 4.7-inch model in the overall manufacturing and testing process. Both reports raised questions about whether or not the 5.5-inch iPhone 6 would be ready for the new iPhone unveiling media event that is rumored to be scheduled for September 9.

For this reason, fans of phablet-sized iPhones may be relieved to see that images of what are supposedly several key components for the 5.5-inch iPhone 6 model have recently surfaced online via Taiwan’s Apple Daily blog. The images purport to show multiple components for the 5.5-inch iPhone 6, including the device’s display, logic board, and battery. Of course, like all unauthorized leaks from Apple’s supply chain, these images should be taken with a large grain of salt. Besides giving Apple users a possible early glimpse of the rarer 5.5-inch model, Apple Daily also claimed that the larger-screen device will be called the “iPhone 6L,” with the “L” presumably standing for “Large.” As seen in the image above, the so-called iPhone 6L appears to be about the same height as the 4.7-inch iPhone 6, but is slightly wider. It also appears to have a narrower bezel above the display to give it additional screen estate.

Perhaps the most interesting component revealed in the leak is the purported battery for the iPhone 6L. A previous leak from Chinese tech site IT168 claimed that the 5.5-inch model would come equipped with a 2,500 mAh battery. This was disappointing news for some Apple fans since many similarly sized Android-based smartphones feature battery capacities of 3,000 mAh or higher. Apple’s current 4-inch iPhone 5S model uses a 1,560 mAh battery that already lags many of its competitors.

However, the images obtained by Apple Daily showed a 2,915 mAh battery for the iPhone 6L. Along with Apple’s next-generation A8 processor and iOS 8 software enhancements, the larger-screen iPhone will likely have a battery life that is as good as or better than the battery life offered by similarly sized Android devices. It should be noted that Apple arch-rival Samsung is currently running a “wall-huggers” ad campaign that mocks the iPhone for its supposedly inferior battery life. As recently reported by CNET, Samsung’s ad campaign now includes posters that are strategically placed around power outlets in several major airports.

So should Apple Daily’s sources be believed? While the components pictured in the images appear to be genuine Apple parts, the claim that the 5.5-inch model will be called the iPhone 6L is harder to substantiate since the name has so far not been seen on any iPhone parts or packaging. It should also be noted that a previous rumor from China.com claimed that the larger-screen iPhone 6 model would be dubbed the “iPhone Air.”