Santa Made It an Apple Christmas 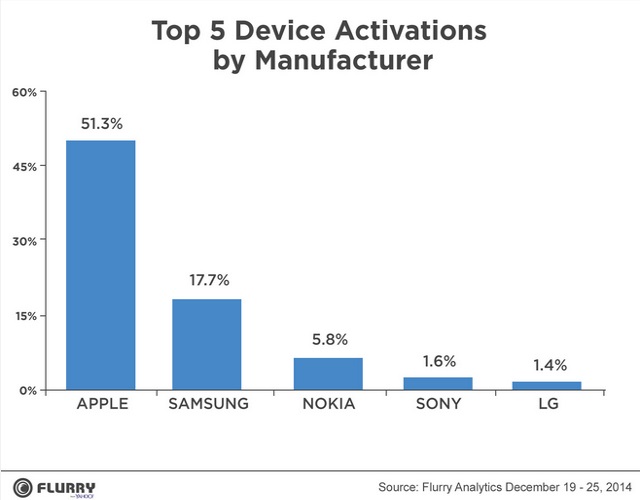 Everyone knows that Santa Claus likes to receive milk and cookies on Christmas Day. However, when it comes to giving, Saint Nick also appears to have a definite preference for a certain fruit-themed brand. As the app analytics firm does every year around the holidays, Flurry examined data from its network in order to determine which mobile brands recorded the highest number of new device activations and app installations.

As seen in the chart above, Apple dominated as the top mobile brand during the holiday season, with 51.3% of new mobile device activations coming from Apple products. Flurry’s data also appeared to confirm the results of a survey conducted by Piper Jaffray analyst Gene Munster shortly before Christmas that suggested consumer demand for the iPhone 6 and the iPhone 6 Plus actually increased since the devices were first launched in September, reports MacRumors.

Samsung was a distant second behind Apple with a 17.7% share of activations, while Nokia was the third most-popular mobile device brand during the holiday season, with a 5.8% share. Fourth-place Sony and fifth-place LG accounted for a 1.6% and 1.4% share of new device activations, respectively. All other mobile device brands — including Xiaomi, Huawei, and HTC — had less than a 1% share each. However, it should be noted that some of these brands make most of their sales in Asian markets, where Christmas is not necessarily a major gift-giving holiday.

Flurry based its conclusions on data it examined from more than 600,000 apps during the seven-day period from December 19 to Christmas Day. Unsurprisingly for a holiday that traditionally involves the exchanging of gifts, Christmas Day sees more new device activations and app installations than any other day of the year, reports Flurry. Along with the surge in new mobile device activations, Flurry said that there was a 150% increase in the number of app installations on Christmas Day in comparison to the average daily number seen during the first three weeks of December. 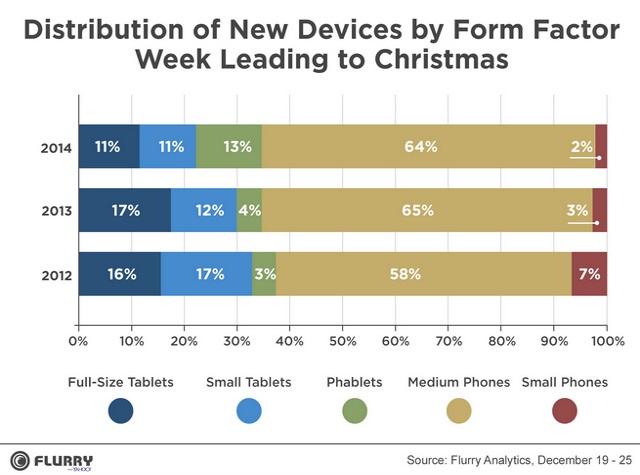 Flurry also examined the distribution of new device activations according to form factor. While the percentage of new medium-size smartphone activations (64%) remained essentially the same as last year (65%), the number of new phablet activations jumped to 13% this year from the 4% share it held last year.

The growing popularity of large-screen smartphones bodes well for Apple, since it recently entered the phablet segment of the smartphone market with its 5.5-inch iPhone 6 Plus. According to Flurry, the iPhone 6 Plus was one of the top five devices to be activated this holiday season. However, the medium-size 4.7-inch iPhone 6 remained the most popular Apple product and took the No. 1 spot among all the mobile devices activated.

The success of the iPhone 6 Plus appeared to come mostly at the expense of full-size tablets, which saw its share of holiday season activations decline to 11% from the 17% share it held last year. Whether this trend is a sign that mobile device users are beginning to use phablets for tasks that were previously reserved for tablets or whether it is simply part of the overall slowdown in the worldwide tablet market remains to be seen.

Whatever the reason behind the declining number of activations for full-size tablets, it may not matter for Apple in the long run. The iPad maker is still the world’s leading tablet vendor and may soon be challenging Samsung’s long-running dominance of the phablet market. Either way, it appears that 2015 will be a promising year for Apple’s mobile device sales.