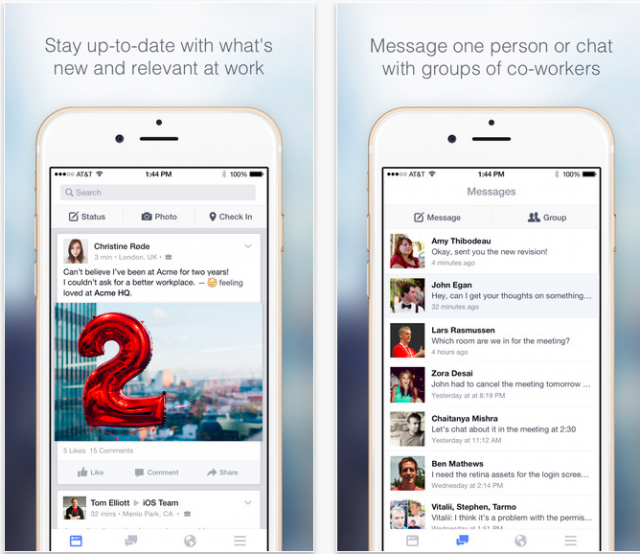 Facebook recently released a pilot of its enterprise app called Facebook at Work, but the biggest question is whether companies will want their employees to use the social network in the workplace. Will Facebook become a part of our work lives as well as our personal lives?

Vindu Goel reports in The New York Times that Facebook not only wants to be the leading social network for people to communicate about their personal lives, but also wants to be a communication channel for the workplace with the Facebook at Work edition of its service. The company announced that it has begun the formal pilot testing of Facebook at Work, a service intended for use by individual companies and organizations. Lars Rasmussen, the director of engineering for the product, told Goel that “It’s the Facebook everyone knows and loves but adapted to work.” However, the service works slightly differently from the regular social network to which we’ve all grown accustomed.

Your employer would create your account — which would remain separate from any personal account that you’ve already established — and everyone in your company would automatically be in your network, negating the necessity of “friending” people. Everything that you post on your timeline would be visible to everyone else in the network, and your company would own all of the content that you post.

A news feed would display the posts that it thinks are relevant to you, based on factors like how often you interact with the person posting a piece of content, the users you specifically want to follow, and how many comments or likes an item gets. Goel notes that if you do want to converse more privately, you can create a group for you and your team to discuss projects, or you can use Facebook Messenger to talk one-on-one with other individuals. Facebook at Work is now available for download on the iOS App Store, though it’s only accessible to users whose employers have set up work accounts for them. 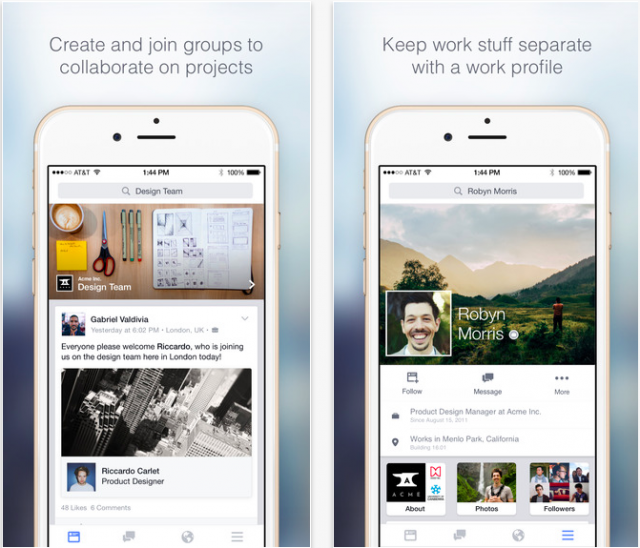 Though Facebook has 1.35 billion users worldwide who log in at least once per month to see what’s happening in their personal social networks, it’s entering an unfamiliar field with its workplace-specific service. Microsoft and IBM offer corporate social networking products. Startups like Slack offer popular collaboration tools, and Google offers a suite of collaboration and communication tools. But Rasmussen notes that Facebook has something to offer:

You can think of Facebook as a more efficient way of keeping in touch with people. At work, it’s the same thing —  you need to stay connected with the right colleagues. So using a social network turns out be a really efficient way of getting your work done as well.

The service is inspired by the way that employees use Facebook internally. The company says that it has no immediate plans to make money from Facebook at Work, though Goel notes that it’s likely to follow the conventions of enterprise companies and charge a subscription fee instead of showing advertising. Facebook at Work is currently being tested by companies including a century-old manufacturer, a retailer, a tech company, and a company whose work force is widely scattered. Facebook is looking for more testers ahead of the service’s release this year.

However, privacy issues and the controversy surrounding Facebook’s handling of them could be a challenge in convincing businesses to adopt the service. The company will need to demonstrate that the Facebook at Work service implements enterprise-grade security and reliability in order to win over enterprise customers.

It will also have to demonstrate that Facebook at Work offers features that can compete with services like Microsoft’s Yammer or Slack. Re/code points out that one feature missing from Facebook at Work — at least at this point in its development — is a document-sharing tool.

TechCrunch notes that Enterprise Social has been a category of apps and services for almost a decade, with companies like Jive, Yammer (now a part of Microsoft), and Socialcast (now a part of VMware) trying to get businesses to adopt social tools. Facebook, by virtue of its popularity, may have an advantage in entering the market. But Facebook will also face some challenges unique to its status as the most popular personal social network.

Many businesses block Facebook on their networks, regarding it as a “black hole” for employee productivity, a perception that the social network will need to overcome to gain traction in the enterprise market. Facebook will also need to demonstrate that Facebook at Work can be a capable and useful communication tool for teams and companies.