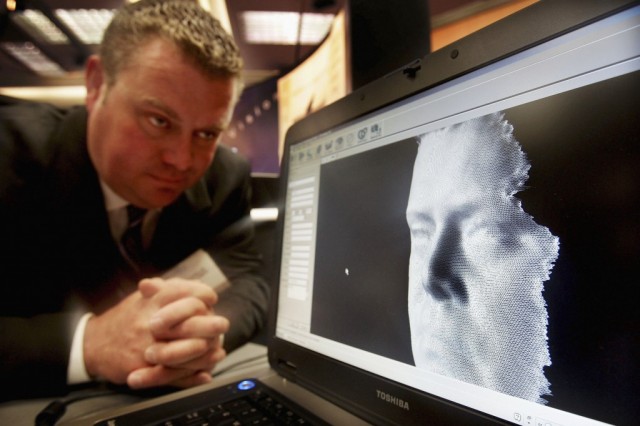 The FBI’s facial recognition system is up and running after 3 years in development. With a database of photos that’s estimated to grow up to 52 million by 2015, this system will help criminal justice agencies at all levels to search potential offenders by face. But the database isn’t just full of mugshots and previous offenders — it’s full of law-abiding citizens as well.

It’s called the Next Generation Identification (NGI) system, and it builds off of the FBI’s fingerprinting database with a top-of-the-line biometric fingerprinting database. The images and information that comes with it are from criminal mugshots, but now if you apply for any type of job that requires fingerprinting or a background check, your prints are sent to and stored by the FBI in its civil print database. However, the FBI has never before collected a photograph along with those prints. This is changing with NGI. Now an employer could require you to provide a “mug shot” photo along with your fingerprints. If that’s the case, then the FBI will store both your face print and your fingerprints along with your biographic data.

“In the past, the FBI has never linked the criminal and non-criminal fingerprint databases,” the EFF stated in a report. “This has meant that any search of the criminal print database (such as to identify a suspect or a latent print at a crime scene) would not touch the non-criminal database.” The NGI database will search through these images without bias. So, how accurate is the system?

This technology is nothing new. Back in 2010 at the ‘Techonomy’ Conference, Google’s Eric Schmidt talked about his company creating a similar kind of search. “Give us 14 images of you and we can find other images of you with 95 percent accuracy,” he said. Unfortunately, the FBI is reporting an accuracy of 85 percent, which doesn’t bode well for innocent citizens.

The bureau already has a victory on its side. In August, the FBI apprehended a sex offender that had been a fugitive for 14 years. Neil Stammer’s wanted poster was run through the database and was matched with a man of a different name from a passport photo. He was quickly traced to Nepal where he was arrested. However, it’s important to remember how often this system could fail.

The NGI database examines the photo it’s given and tries to match up similar mathematical characteristics — distance between the eyes, nose, mouth, etc. — for facial patterns. While a human could do better matching a picture of a person with another person, it would take too much time to sift through all 52 million faces to find the correct one. Also, as the dataset of photographs increases, the risk of false positives increases.

“Restricting the database size in order to maintain the integrity of the system is an important priority,” noted the study Facial Recognition Technology: A Survey of Policy and Implementation Issues. “The temptation to increase the gallery will lead to a deterioration of the system performance, eventually at the cost of identifying those important high-risk cases in need of identification and apprehension. Very clear policies of prioritization are necessary.”

We could be hearing stories of innocent people suspected, their lives turned upside down, for a crime they didn’t commit.

Even if accuracy could be guaranteed, there’s a breach of trust by admitting non-criminals into this photographic database. The collection of photographs of the American population through these methods is unsettling and a violation of privacy. Jennifer Lynch, Staff Attorney with the Electronic Frontier Foundation (EFF), put it best, saying that, “Face recognition, though, takes the risks inherent in other biometrics to a new level because Americans cannot take precautions to prevent the collection of their image.”

The worst part of this situation is that America’s laws — even the Constitution — are hardly a match against this latest government data collection. There are no legal protections in place for citizens. If Facebook wanted to hand over photos of all its users, it could (though it wouldn’t be economical for the company to do so). It has become more apparent in the last decade that in order for privacy to be retained, laws must grow with advancements to prevent this overabundance of surveillance Americans are encountering. Technology has capitalized on too many loopholes in the Constitution.