Social Networks Are Changing How We Respond to Emergencies 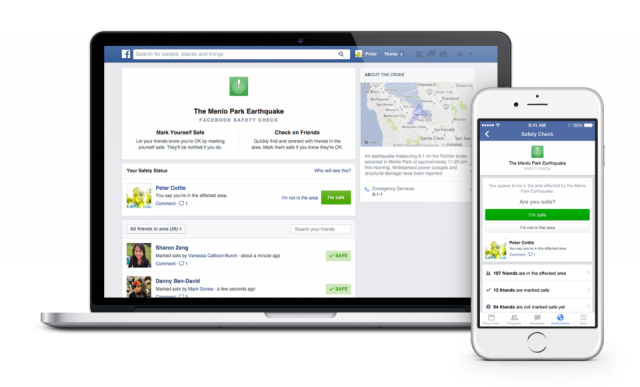 Social networks have dramatically changed the way that we communicate with each other and access information on a daily basis, so it’s only natural that they also provide us with new ways to respond when a natural disaster or other major emergency strikes. Facebook recently introduced a feature called Safety Check, a tool that enables users in an area affected by a major disaster or crisis to say that they’re safe and check on their friends and family in the area. In a post on Facebook’s Newsroom, VP of Product Management Naomi Gleit and Software Engineer Peter Cottle announced the feature, which will help members to use the social network to stay in communication in times of emergency.

When the tool is activated after a disaster and detects that you’re in the affected area, you’ll receive a Facebook notification asking if you’re safe. (Facebook explains, “We’ll determine your location by looking at the city you have listed in your profile, your last location if you’ve opted in to the Nearby Friends product, and the city where you are using the internet.”)

If Facebook gets your location wrong, you can tell it that you’re outside of the affected area. But if you are in the affected area and you’re safe, you can mark yourself safe, and Facebook will generate a notification and News Feed story with the update. You can also mark friends as safe, or vice versa. Only friends will see your safety status and any related comments you post.

If you have friends who are in the area affected by a disaster or crisis, you’ll receive a notification when those friends mark themselves as safe. Gleit and Cottle write, “If you’re ever in a situation that would require you to use Safety Check, we hope it’s a tool that helps you stay connected to those you care about, and gives you the comfort of knowing your loved ones are safe.” 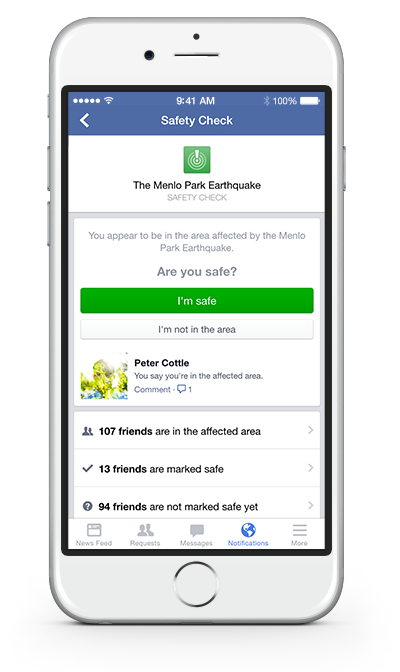 The Newsroom post explains that Safety Check grew out of the social network’s observations of how people used social media to stay connected during the 2011 earthquake and tsunami in Japan, where entire cities were flooded and nuclear power plants were damaged. In 2012, Facebook tested its Disaster Message Board within Facebook, a tool that originated in the company’s Japan office to enable users to mark themselves or friends as safe.

In the following years, users, first responders, and relief organizations continued to use Facebook in the aftermath of natural disasters, and Re/Code learned that product manager Sharon Zeng and software engineer Peter Cottle began work anew on the project during a company-wide hackathon 11 months ago. The Disaster Message Board became Safety Check,  which will be available on Android, iOS, feature phones, and desktop.

While Marcy Scott Lynn, global policy programs manager at Facebook, told Re/Code that there are currently no partnership plans in the works, Facebook could potentially partner with organizations like the Red Cross in the future. But Lynn tells Re/Code, “We recognize this tool isn’t for everyone or every time. It wasn’t designed as a first responder tool.”

A year ago, Twitter launched its own feature to help users access important information during disasters and emergencies. Called Twitter Alerts, the feature expanded on the work that Twitter began with Lifeline — a feature to help Japanese users find accounts dispensing timely information — that delivers notifications of tweets that accounts mark as alerts. To opt in, users just need to turn on Twitter alerts for the accounts they would want to hear from in an emergency.

An example is FEMA, which can send Twitter alerts with essential information regarding a disaster or crisis. The list of organizations participating in Twitter Alerts includes the American Red Cross, the Centers for Disease Control and Prevention, the Federal Emergency Management Agency, the National Oceanic and Atmospheric Administration, and the Department of Homeland Security. Twitter has even drawn up a guide to the “best practices for using Twitter in times of crisis,” which details how organizations should use Twitter to “inform,” “connect,” “debunk,” and “organize.”

As Scientific American reported last June, social media had become an integral part of disaster response by the time Hurricane Sandy occurred in 2012.  During and immediately following Hurricane Sandy, sent more than 20 million tweets directly related to the storm, despite the loss of cell phone coverage during its peak. Utility companies like PSE&G used tweets to alert residents to the locations of tents and generators.

Following the Boston Marathon bombings, a quarter of Americans reportedly relied on Facebook, Twitter, and other social networks for information. Community members created a Google document to offer strangers a place to stay, food, or a hot shower when roads and hotels were closed. Google itself adapted its Person Finder with a specific version for the Boston Marathon Explosions, to help users find their friends and family after the crisis.

As people more consistently rely on social media to stay informed during and following a disaster, the cycle of information moves quickly, and misinformation can easily proliferate. During the aftermath of Hurricane Sandy, FEMA created a “Rumor Control” page to counter the spread of misinformation about assistance programs and the organizations providing them.

Fed Tech reported in July that the Department of Homeland Security’s Science and Technology Directorate had created a Virtual Social Media Working Group to draw up guidance for the safe use of social media tools for emergency preparedness and response before, during, and after emergencies. The first step was to determine what areas needed further research., and in June, the Department of Homeland Security issued a detailed report (PDF) which identified “critical areas requiring further consideration and research to address key technology, process, and policy gaps.” These gaps included the following areas of concern:

As regulatory bodies and relief organizations work out their best practices for using social media to disseminate information in times of disasters, the addition of emergency features by popular tech companies should help the average consumer to become more aware of what he or she will need to do to stay in touch with family and friends in the event of a natural disaster or other crisis. With many users subscribing to Twitter alerts the same way they would turn on push notifications for a favorite app, consumers are increasingly able to prepare for an emergency just by checking a few settings on their smartphones.

Many are also downloading messaging apps that, while not social networks in the Facebook Newsfeed sense, enable them to communicate with others, and will continue to fulfill that function even if the traditional wireless service on which Twitter and Facebook rely experiences outages. Firechat, a simple app that enables users to chat “off-the-grid.” When they download and register with the app — they don’t need to use an email address or any other personally identifying information — they can join public chatrooms that include everyone using the app nearby.

But instead of data or WiFi, FireChat uses mesh networking, and enables users to connect with eachother via Bluetooth, peer to peer WiFi, or traditional WiFi networks when they’re available. Because users connect directly with other users, they don’t need a traditional data connection or a WiFi signal. Firechat is built on Apple’s Multipeer Connectivity Framework, and clearly demonstrates the utility of mesh networking to facilitate communication not only at festivals and concerts, but also potentially in emergency situations.

It’s undeniable that social networks have changed how everyone from the average bystander to government agencies respond to natural disasters and other crises. People can let their families know that they’re safe and organizations can distribute information on aid and disaster response via the social networks that people regularly access on their mobile phones. But to make their platforms’ emergency features more universal, social media companies should consider implementing mesh networks, since they can be established by anyone, and are more robust than what we think of as the “regular” internet, significantly so in the case of a natural disaster.

The current achievements and future potential of both social networks and mesh networks in emergency response represent a new approach to accessing and disseminating information in a digital age where the cycle of information is increasingly decentralized. By providing important new ways to connect with others and to potentially save lives, these mobile tools demonstrate how quickly the capabilities of the internet are evolving, and its ability to impact our lives at the most critical times with it.