Solving the Problem of Fitting Virtual Reality into the Living Room 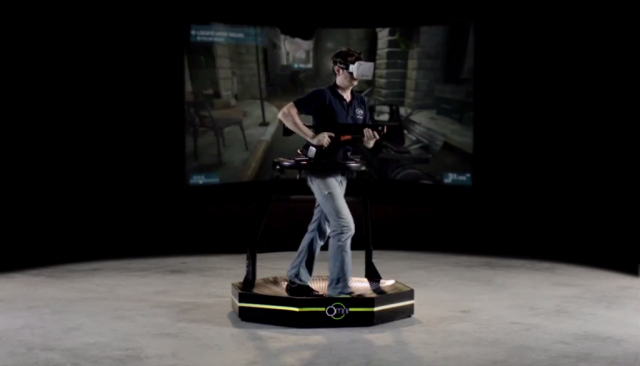 Video game systems used to easily fit into whichever room you chose, in whatever media center you owned. Consoles used to quietly conform to your living room, dorm room, or apartment perfectly — just tuck the console into a shelf and wrap up the controllers when you’re done. But recent developments have left us to consider if our living rooms are even big enough for the coming virtual reality accessories.

Motion sensing kicked off the living room discussion with the Nintendo Wii. It fit perfectly on shelves, but made consumers consider moving a coffee table or widening out the area so guests wouldn’t crash into each other while playing Mario and Sonic at the Olympics. Microsoft’s Xbox Kinect forced many to reconsider their living room layout and rearrange furniture in order to accommodate its spacing needs, as it required players to stand six to eight feet away from the sensor in order for it to work. It ended up being a fancy dust collector for many apartment owners, but others accommodated its needs.

Virtual reality presents home owners or renters with a new set of requirements to ponder, like “How is this going to work in my living room?” The headsets, treadmills, and other virtual reality equipment are competing for space in your home, and there’s enough of it to occupy its own separate room.

The Virtuix Omni and Cyberith Virtualizer are omnidirectional treadmills that allow players walk and run like they would in the game, and they aren’t small. The Omni is 45-inches in diameter and weighs 75 pounds. It’s about the size of a person standing with ample personal space, but it can’t be folded up and its weight makes it difficult for anyone to move to the corner (or out of the corner).

Consumers will likely have to mold their living rooms around this device, which most enthusiasts may be already considering. But in order for everyday buyers to get on board the latest evolution in gaming, developers may have to take their needs into consideration.

Headsets like the Oculus Rift and Project Morpheus offer another challenge for their living space. The headsets isolate your sight to immerse you in another world. Coupled with headphones and you’ve pretty much cancelled-out the whole real world around you, which could pose a problem if other family members are walking by or you’re wandering awfully close to a lamp on the table.

Most VR experiences, however, are purely based toward the visual, which means sitting on the couch, looking around with the headset, and moving with a traditional controller. But some developers are trying for alternatives to treadmills and using technology to integrate your real-world space into a VR environment.

The developers of the Atlus Virtual Reality were seeking funding a while back on Kickstarter. Their plans to obtain crowdfunding eventually failed, but concept is still a dream of the VR development community. The device utilizes your smartphone and its camera to map your home and create a world based on the layout.

For example, a table in your may take the shape of a tree in your VR world. This saves you from potentially tripping over your own furniture, but may not help you from avoiding embarrassment or freaking out your family or roommates.

That brings into question the next issue. Even if we figure out how to navigate the living room, there are likely other people that live with you. Shigeru Miyamoto, CEO of Nintendo, has been experimenting with VR since the Virtual Boy in 1995. He has learned from Nintendo’s VR failure and taken into consideration that other people often reside in the living room. In an interview with Time, he said that video games on the Wii U are “intended to be fun not only for the person who’s playing, but also for the people who are watching.”

Most gamers with a controller in hand are still somewhat present. Headsets isolate and completely tune out everyone else in the living room. People like to watch others play, and headsets could get rid of that sharing experience completely. Mom and dad won’t quite know what you’re playing, but will likely take a few guesses while you’re looking around frantically with your headset on.

Virtual reality has taken many strides from 20 years ago. Advancements in technology have made it more accessible to consumers, but there’s a matter of convenience that still needs to be worked out. Some people don’t want to lug out a 75-pound machine to play Call of Duty. Developers have made some major developments, but now they need to make their products more inclusive and discrete.