Amazon’s Kindle Store Could Be a Goldmine For New Authors 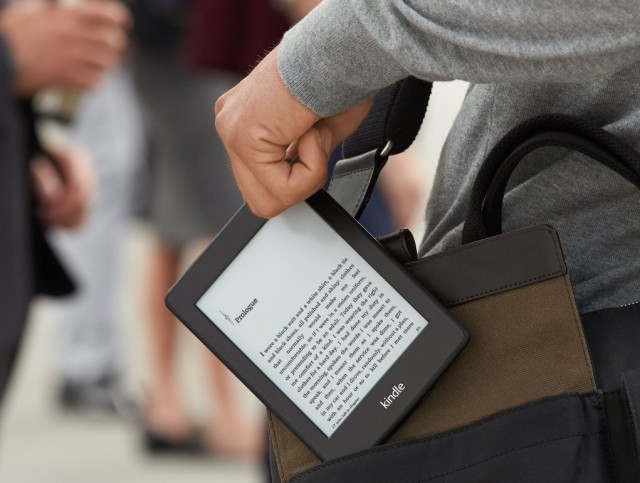 If you thought that e-book sales at Amazon’s (NASDAQ:AMZN) Kindle Store were completely dominated by large publishers, you might not be giving small publishers and self-published authors all the credit they’re due.

The research shows that books by the Big Five publishers account for only 16 percent of the titles on Amazon’s bestseller list, news which bodes well for Amazon’s newly launched Kindle Unlimited, an e-book subscription service that has debuted with books by Big Five publishers conspicuously absent. Author Earnings notes that the data are also good news for self-published authors, who are gaining ground in both fiction and nonfiction sub-genres: “As it has proven to be in other fields of entertainment, the indie movement in literature is not a blip and not a gold rush. It appears to be here to stay.”

The Guardian says that the quarterly report is assembled by self-publishing advocate Hugh Howey and an unnamed “Data Guy,” drawing on publicly available data on the rankings of 120,000 titles available on the Amazon Kindle Store and combined with sales estimates. Though the report is praised as an attempt to shed light on a changing market, Bookseller editor Philip Jones notes that it’s unclear exactly how accurate Howey’s claims are, or what the “Data Guy” uses as specific sources. “Nobody has a good view of this market, because Amazon holds all the data and doesn’t share it,” he told The Guardian. “Anyone who claims otherwise is just making it up.”

Here are six major insights from the report that, taken with a grain of salt, suggest the potential for the success of self-published books on Amazon’s Kindle Store. 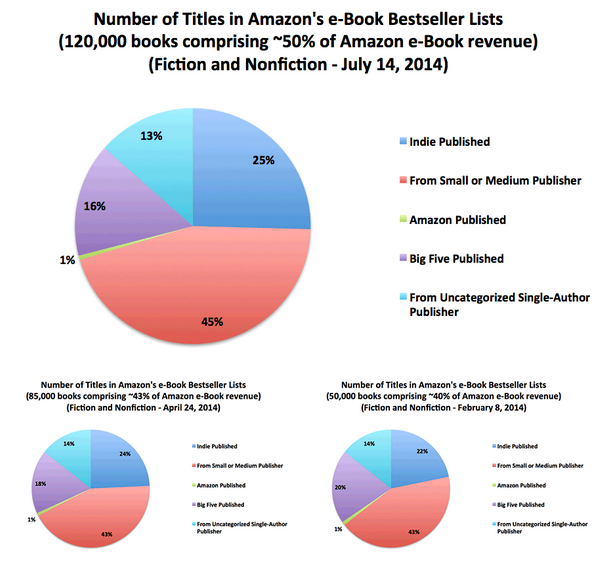 The report explains: “With each of our quarterly reports, the number of ranked titles has grown, as Amazon keeps adding new categories, sub-categories, and sub-sub-categories. It’s like a bookstore adding more shelves and giving more titles visibility … the shelf space for Big Five books has dropped by 4%, and these publishers now only account for 16% of the e-books on Amazon’s category bestseller lists.” 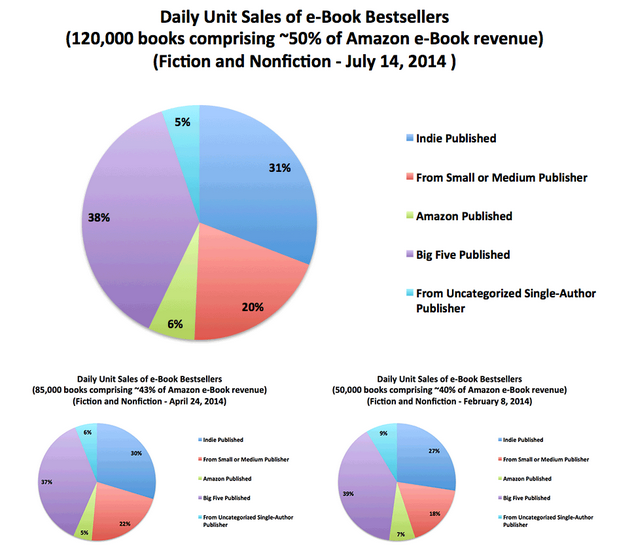 The report estimates that self-published authors account for 31 percent of total daily e-book sales across genres. Author Earnings said, “This makes indie authors, as a cohort, the largest publisher of e-books on Amazon.com in terms of market share.” 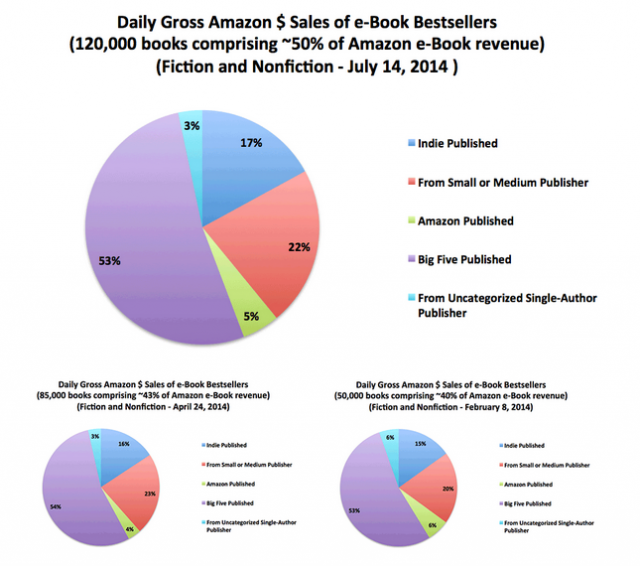 3. Self-published books account for only 17 percent of gross sales, but that figure may be growing

As the report puts it, “gross sales are where it begins to get interesting.” Self-published books cost less than books from big publishers, and while self-published titles account for 31 percent of daily sales, they only account for 17 percent of gross sales. While that share has increased so far throughout the year, it’s not yet clear if that growth is a seasonal trend or will translate into longer-term growth. 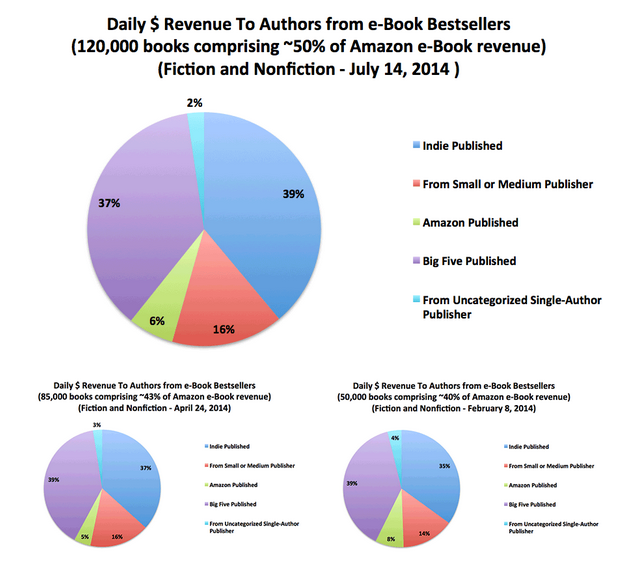 Self-published authors now earn more in royalties than Big Five authors and account for almost 40 percent of all e-book royalties earned on the Amazon Kindle Store. The Author Earnings report notes optimistically: “The days of looking at self-publishing as a last option are long gone. A lot has changed in six months.” 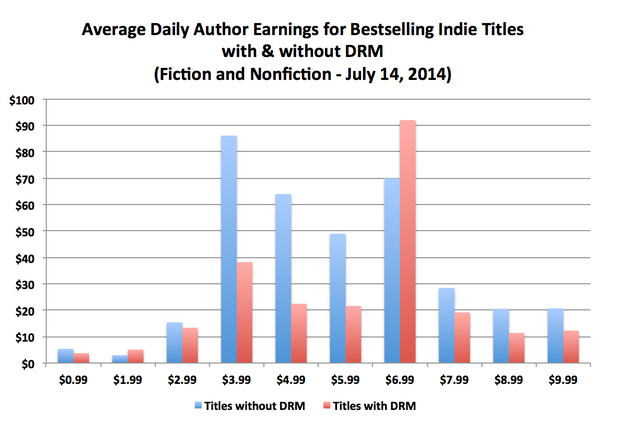 5. DRM, which is optional on Amazon, hurts sales at every price level

The report also found that DRM, or digital rights management, is “a bad idea” and hurts sales at all price points. DRM is largely unsuccessful in thwarting pirates and makes it difficult for paying consumers to move e-books among devices. DRM is optional for both major publishers and self-published authors on Amazon. Almost 100 percent of Big Five books use DRM, while only about 50 percent of self-published books use it.

“The 50% of non-DRM e-books account for 64% of total unit sales,” the report notes. “Indie titles without DRM sell twice as many copies each, on average, as those with DRM.” At the two price points where DRM titles appear to outsell non-DRM titles, the research found that the reversal was due to three DRM titles published by two authors. 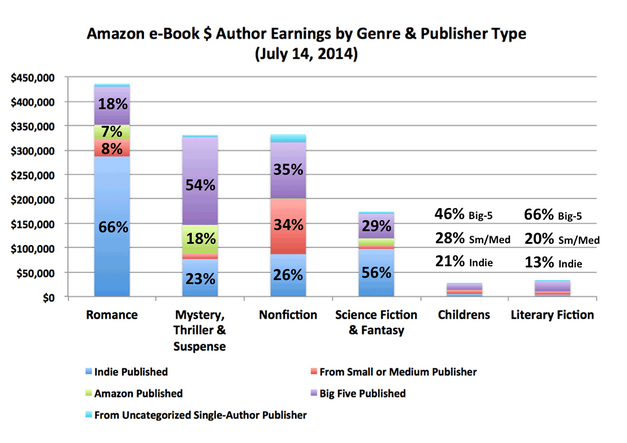 6. Self-published books have gained market share across a wide variety of genres

Genres that have been decried as not viable for self-published authors turn out to be small markets overall. Literary fiction is a great example: “The market for literary fiction is anemic for indie authors simply because it is an anemic segment of publishing overall. In fact, Literary Fiction makes up only 2% of Amazon e-book unit sales and 3% of Amazon e-book dollar sales. More startling is the fact that 20% of that 3% belongs to a single aggressively-promoted title, The Goldfinch. Even including that title, literary fiction barely amounts to 2% of total author earnings.”

While that particular statement may dismiss what is a small but successful market in print books, it reveals the bias of the data. What holds true for Amazon’s Kindle Store is true only for e-books, only for Amazon’s store, and only for the particular period from which the data were drawn. And while the report admits that it’s too early to tell if the current trends will be part of larger growth, the data do illustrate the huge potential for change in the digital publishing industry.