‘Super Smash Bros. for Wii U’ Is Perfectly Chaotic 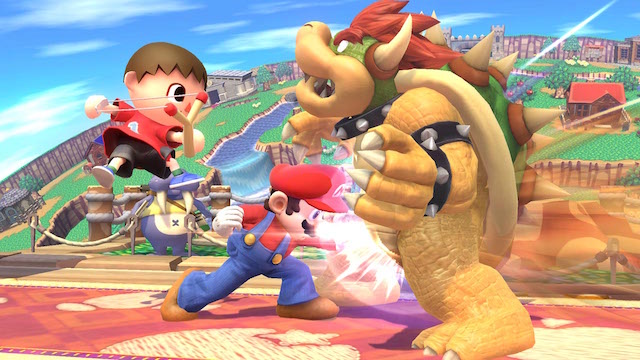 Nintendo could probably release an HD remastered version of any previous Super Smash Bros. game and sell millions of copies. But that wouldn’t do what Nintendo needs to do right now, which is to convince holdouts to buy Wii U consoles. Nintendo is trailing something fierce in this generation’s console war, and it needs a home run.

Super Smash Bros. for Wii U is a grand slam.

Nintendo went above and beyond to deliver just about everything fans of the series could possibly want, plus a whole lot more. The game is jam-packed with content: 52 characters, 47 levels, single-player and multiplayer modes aplenty, insane customization options, and enough chaotic action to make a prison riot look tame. It does all this without breaking a sweat, and then it beckons you to come back and play some more. It all adds up to a show-stopper of a game that’s going to be in heavy rotation for Wii U owners for a long, long time.

Like most Nintendo games, Super Smash Bros. looks much less hardcore than it actually is. If you’ve never seen this series before, you’d be forgiven for thinking a game that features Mario uppercutting Pikachu, who’s roundhouse-kicking the dog from Duck Hunt is just a bunch of childish nonsense. You’d be mistaken.

Beyond the veil of cartoon insanity lies the rock solid foundation of a very serious fighting game. It’s clear that every move for every character was strongly considered before being included. While some characters are stronger for certain play-styles than others, Nintendo has done a good job of making each character a worthy opponent.

The power-ups and random events, which add to the gleeful bedlam onscreen are also carefully selected. Every power-up that appears on the field, from a hornet’s nest to a Bullet Bill, can assist each combatant equally. And when a flying, fire-breathing dragon descends on the Metroid stage, it doesn’t play favorites. The game welcomes chaos, but if you look closely, you can see there’s a method to the madness. 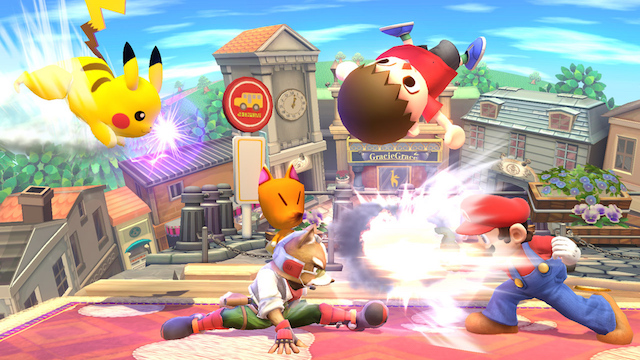 If you want to see everything Super Smash Bros. for Wii U has to offer, you’re going to be busy for a very long time. From characters to stages to trophies to missions, this game is stuffed full of tasks to undertake and things to unlock. The first step for most people will be to gain access to the hidden characters and stages, simply by playing matches, which can be done against people online, friends in the same room, or computer-controlled characters.

If you grow tired of standard matches between two to four characters, you can mix it up by playing the brand new eight-player mode. If the game is nuts with four players, it’s completely bonkers with eight — which is to say it’s a total blast. Playing with eight players in the same room requires a lot of controllers, but thankfully you can use just about every controller ever released for the Wii or Wii U to play this game, or a 3DS, or a GameCube controller, if you buy an adaptor.

Then there’s a challenge mode, which has you perform a series of hop-in-hop-out tasks that range from “so easy a baby could do it” to “pull out your hair and break your controller impossible.” Then there’s a terrific mode that uses the characters and levels to guide you through the history of Nintendo games. They’ve even included a digital board game that has you and your friends moving around a handful of board layouts, collecting power-ups to use in matches whenever you cross paths with another player. It takes some time to get a handle on the rules, but once you do it’s a lot of fun. 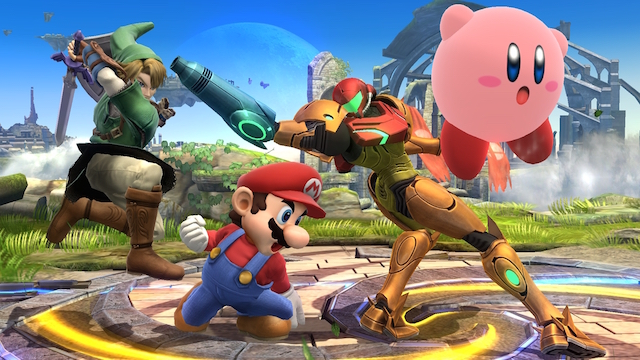 Which brings us to the chief drawback for Super Smash Bros. for Wii U: It’s not all that welcoming to newcomers. The menus can be challenging to navigate if you’re not familiar with the quirks of the series, and I didn’t find a tutorial mode to bring you up to speed on how to play. Also, since the game can be played using a number of different controller types, figuring out the moves one each one can take some time.

But that’s small potatoes compared to the game’s pluses. Longtime players will love that you can tweak just about everything, including character costumes, matches, special moves, and even the likelihood a given song will play on a particular level. This is one of if not the most customizable games I’ve ever encountered.

The most remarkable thing about Super Smash Bros. for Wii U is that the fun is essentially endless. This is the quintessential installment of the series, and it packs in more than enough fun, frivolity, and controlled chaos to keep fans coming back for years to come. If you’re not a Wii U owner yet, there’s never been a better time to become one.