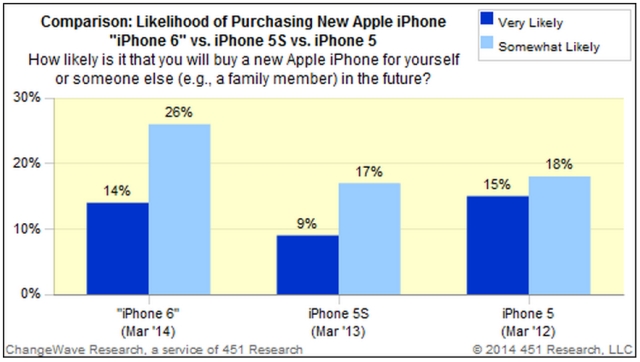 Consumer interest in Apple’s (NASDAQ:AAPL) rumored large-screen iPhone 6 has reached record levels according to a new survey conducted by market research company 451 Research. The survey found that 14 percent of respondents were “very likely” to purchase Apple’s iPhone 6 for themselves or a family member, while 26 percent said they were “somewhat likely.” The survey was conducted in March and involved 4,109 respondents primarily from North America.

As noted by 451 Research, the level of consumer interest in Apple’s upcoming iPhone model exceeds the interest levels recorded in March 2012 before the launch of the iPhone 5 and in March 2013 before the launch of the iPhone 5S. “This is the highest level of demand for an unannounced Apple model in a ChangeWave survey — stronger than we’ve seen in previous years for the iPhone 5S and iPhone 5 models prior to their announcements,” noted 451 Research’s Andy Golub. “Speculation over a larger screen iPhone is clearly striking a chord with consumers.”

Several media outlets have reported rumors that Apple’s next-generation iPhone will be available in two larger screen sizes. Earlier this year, The Wall Street Journal reported that one of the upcoming iPhone models will feature a screen size larger than 4.5 inches and that the other will have a phablet-sized screen larger than 5 inches. Respondents in 451 Research’s survey were given a brief description of some of the probable features that would be found in the upcoming iPhone 6, including “a larger screen size, gesture control, a faster processor, and an updated iOS operating system.” The researchers also told respondents that the iPhone 6 would likely “cost $199 for the 16GB model, $299 for the 32GB model, and $399 for the 64GB model on most of the major carriers.” However, it should be noted that Apple has not confirmed any of the features or prices of its upcoming iPhone models.