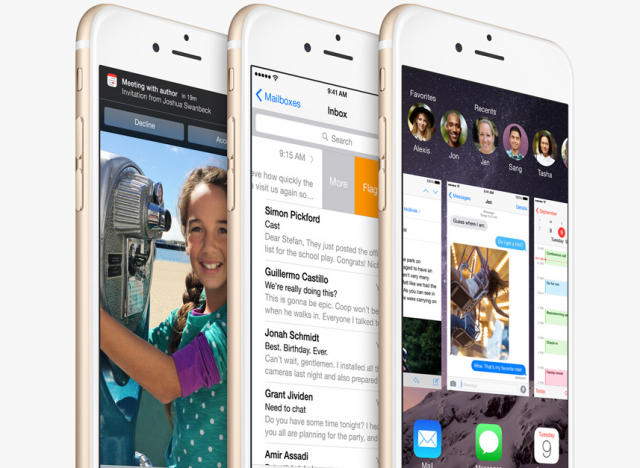 Chances are good that the iPhone apps you’d consider most valuable are ones that you spend a lot of time with: perhaps your favorite news app, a social network that keeps you entertained, or a calendar app that you can’t live without. But Apple is paving the way for a future where the best iPhone apps are those that you really won’t spend much time with at all. In fact, you may never even need to open these apps to use them.

Zachary M. Seward reports for Quartz that apps are no longer standalone destinations on iOS, but function across and as part of the operating system itself. The shift in Apple’s app strategy has been a long time coming, and Seward notes that third-party apps for the iPhone were once completely sandboxed, without any knowledge of each other or of the rest of the phone. But gradually, Apple gave developers access to data and features that enabled their apps to interact with one another and with the other functions of the phone.

A prime example is Apple’s introduction of app extensions last year; extensions bring third-party apps’ functionality to new parts of the iPhone and even into other apps. HealthKit, WatchKit, and even HomeKit extend developers’ reach into the operating system. Seward explains, “Apps left the sandbox to enjoy the whole playground,” and predicts that Apple will seek to push the idea to its “logical conclusion” by enabling developers to create apps that can provide an excellent user experience without even opening them.

Take Apple Watch complications as an example of what Apple already allows and how its offerings could evolve in the future. Apps are so far the least compelling aspect of the recently-launched Apple Watch, and while more innovative and useful apps will certainly be developed as Apple allows for more robust features, the major source of engagement with the watch is its face.

In Seward’s estimation, the Apple Watch’s greatest utility is its ability to provide “ambient information” via the face and its customizable widgets, which Apple has termed “complications.” The most useful complications provide weather or calendar events, and the selection could get even more interesting if Apple enables the creation of third-party complications. Such complications could bring the most important utility of a user’s favorite to the face of the Apple Watch, where Seward envisions he or she could turn on the air conditioning at home or check when it will start raining.

The iPhone already has a feature that’s equivalent to third-party watch face complications in its Today widgets. Apple introduced the Today screen with iOS 8, but because it’s “buried” within the interface, it doesn’t seem to generate much enthusiasm among iPhone users. However, Today widgets offer a window into fully-featured apps. Developers can display a wide variety of content in their widgets, and users can complete simple actions from the Today view. The widgets are similar to a feature that’s long been a part of Google’s Android, though Android enables these widgets to appear on a phone’s home screen. Seward thinks it’s possible that Apple will enable developers to place this functionality “closer to users” to encourage wider adoption.

There are some similarities between the iPhone’s Today widgets and another form of app extension on the Apple Watch, called Glances. Glances are, so far, less useful than Today widgets because users can’t interact with them, but they enable developers to display a small amount of information and link users back to their app to access more functionality. That’s likely to change in sooner rather than later, since many of Apple’s own Glances are already interactive and enable users to control an app with a simple tap. For example, you can pause audio playback, change the volume, or put your iPhone into airplane mode from an Apple Watch Glance. The ability to build native Apple Watch apps could also bring the ability to build better Glances.

Additionally, Apple may upgrade developers’ ability to create interactive notifications. In the most recent versions of Apple’s operating systems for the iPhone and for Mac, the company encourages developers to create apps that can be used primarily through notifications. Such apps leverage the ability, newly gained by developers, to add interactions to notifications, enabling users to accept calendar invites or like status updates without even needing to open the app.

Calendar apps, navigation apps, fitness apps, and even paradigm-pushing mobile games are already taking advantage of interactive notifications, proving that simple actions don’t need to require opening up an app. Apple could help developers by allowing them to build interactive notifications that enable users to respond to messages, as users can with Apple’s Messages app. That would enable users to send messages via Facebook Messenger, Twitter, and more just by swiping a notification.

With iOS 8, Apple also introduced many other kinds of app extensions that Seward reports aren’t significant enough to dwell on yet. But one last feature worth addressing is the share sheet, which has traditionally been closed to developers but now enables events in their apps to be triggered from just about anywhere in iOS. Seward notes that many apps do one (and only one) thing very well, and the share sheet enables these apps to become “the new equivalent of browser bookmarklets.” Some utility apps enable users to create combinations of actions that can be triggered from a share sheet, making the iPhone even more powerful.

Regardless of exactly how Apple opts to usher in a future where an app’s functionality can live outside of its icon on your iPhone’s screen, it’s clear that it makes less and less sense to need to open every app actively and independently to take advantage of its utility. Paul Adams, vice president of product at customer communication firm Intercom, notes on the company’s blog that “the end of apps as we know them” is coming. “The notification is the full experience,” Adams writes of the interactive notifications now beginning to take hold on iOS, and in the future, such notifications will enable ” full product experiences and independent workflows.”

Adams projects that apps will soon break down content and actions into atomic units separate from the container of the apps themselves, and then reassemble those units based on context. Content can be optimized and reformatted based on where you’re viewing it. (Think messages that can be sent and received in different formats depending on where you are, what you’re doing, and which device you’re using when you send or receive a message.) Adams thinks that notifications could become the primary way that we interact with apps, and he thinks that such a shift will be so successful that “screens of apps won’t exist in a few years, other than buried deep in the device UI as a secondary navigation.”