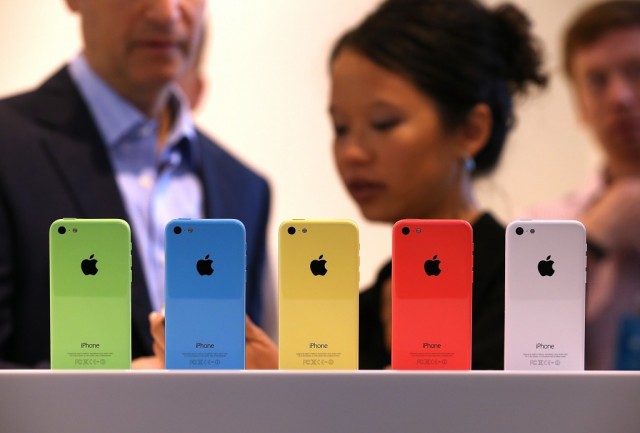 The iPhone 5C is one of the more colorful members of the Apple lineup. The plastic-backed iPhones come in candy colors reminiscent of the iPod Nano. This iPhone was a dramatic change from the usual iPhone, not only in style, but also in price. It retail price is $99 with a mobile contract for the 16-gigabyte model. Some were skeptical of this inexpensive colorful departure from past iPhone models. Apple’s smartphones were known for being high-end, so a high-profile mid-tier entry was questionable.

Despite positive reviews in tech media outlets like Engadget, the iPhone 5C sold below expectations in the period following its fall 2013 release. Many loyal Apple customers overlooked the cheap iPhone in favor of the iPhone 5S, the iPhone 5’s metallic-hued upgrade. Early in 2014, reports surfaced that suggested Apple considered dropping the iPhone 5C in its next iPhone lineup, reported AppleInsider. Instead the company launched a Tumblr campaign for the product. Since then, sales of the iPhone 5C seem to have turned around.

Apple CEO Tim Cook praised the iPhone 5C as a sales leader in the third-quarter results conference call. The rest of Apple’s third-quarter results announcement consisted of the standard mix of results and commentary on products. The press release notes that iPhone sales helped drive record levels of revenue for the June quarter.

When an analyst asked a question about the iPhone 5C, Cook said that the 5C was leading growth, especially in comparison to the previous mid-tier iPhone, the iPhone 4S. “It would be comparing the 4S, which was in the mid-tier,” said Cook. “The growth in that sector was the highest growth during the quarter we just finished.”

Exact sales numbers for the iPhone 5C alone are not available, as Apple does not publish this information for competitive reasons. Apple has its rivalry with Android, especially Samsung to consider.

The iPhone 5C also found a niche among new Apple customers switching from Android. These customers were most commonly ditching Samsung and LG phones in favor of the colorful iPhone. This niche is valuable to Apple. While its iPhone dominates in the United States, on the world stage Samsung gets the top spot. Any product that helps draw in former Samsung users is good news for Apple. The least iPhone-like of the iPhones may be drawing former Android users to Apple. Between this and its recent success in the mid-tier smartphone market, it looks like the iPhone 5C may not be the failure critics predicted it to be earlier this year.