The Next ‘Doom’ Revealed: Back to the Series’ Gory Roots 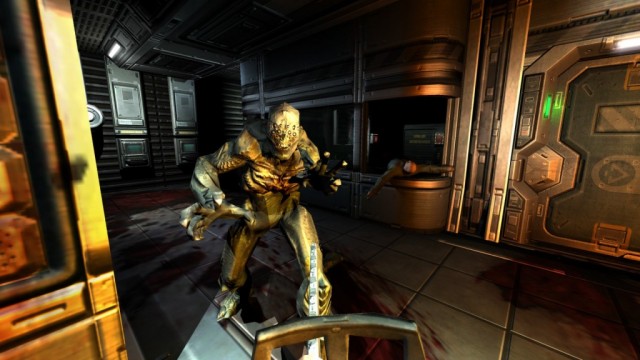 At long last, a new Doom is heading our way. The upcoming game was first announced at QuakeCon way back in 2007, but we haven’t heard much about it in the meantime until this year’s E3 when developer Id Software showed off a brief teaser trailer. Then yesterday, after all these years, Id gave the gaming press a 20-minute glimpse of actual gameplay. So how does it look?

Unfortunately, no recordings of the event were allowed, and Id has elected not to release the footage to the world at large. It was an under-wraps, closed-door preview of the game, but the journalists in attendance were allowed to report what they saw. And report they did. We’ve gathered their impressions to deliver a clear look at what to expect in the game.

But before we dive in, here’s some background on the game. This is the first entry in the Doom franchise in 10 years, since Doom 3 released in 2004. But instead of continuing the story line of the 21-year-old series, the upcoming installment will be a reboot of the original title. So this game won’t be Doom 4 – it will simply be called Doom. It will launch on PC, Xbox One, and PlayStation 4. No release date has been announced.

Polygon reports that the gameplay demo begins with hordes of demons invading a military base on Mars. The gameplay features lots of fast-paced action, with the main character battling numerous demonic enemies at once — a stark difference from Doom 3, which had a much more deliberate pace and fewer enemies onscreen at a time. In another departure for the series, the main character is seen jumping and using a jetpack to double-jump — actions that weren’t possible in the first two installments of the series.

According to executive producer Marty Stratton, the development team tried to keep the feel of the original game while still bringing it into the modern era. Some of the “ingredients” they identified, according to Polygon, include “a cast of over-the-top demonic enemies, huge and inventive weapons — ‘which you can carry all at the same time,’ Stratton confirmed — and quick combat, free of regenerating health.”

True to the series’ roots, the gameplay features loads of gore and severed limbs. IGN says the demo exhibits “wonderfully gory close range executions, including special ones for dropping down on enemies from above.“ Also, “dying results in a crazy fatality scene depending on what killed you à la Dead Space. Revenants rip your arms off and punch straight through your combat helmet.”

The upshot seems to be that, although the development team is bringing in gameplay mechanics from modern shooters where it makes sense, it’s more interested in sticking with what worked in the original Doom games. If they pull it off, we could be looking at a very unique game that combines the best of both worlds.

There’s plenty to love about the original games from the 1990s. Although it hasn’t seen as many installments as series like Call of Duty and Battlefield, Doom is one of the most notable series of first-person shooters in the history of the medium. The original Doom, along with Wolfenstein 3D, is credited with essentially creating the entire first-person shooter genre. Nor is Doom the only classic first-person shooter to see a renaissance in recent years. This year’s Wolfenstein: The New Order was met with mostly positive reviews and has sold well over a million copies across platforms. Doom, which has arguably remained more relevant over the years than the Wolfenstein series, could see even higher sales.

Part of that, of course, depends on when the game is released. We can only hope that these press events signal that the release date is near. But when we’re talking about a franchise that has only spawned three main installments in 21 years, you never know.