During this year’s Oscars, Apple debuted an ad that pitches the iPad as a powerful filmmaking tool. In the ad, director Martin Scorsese speaks in a voiceover about creativity and how “every step is a first step; every brush stroke is a test; every scene is a lesson; every shot is a school.”

According to Mashable, the accompanying images tell the (true) story of a group of Los Angeles County High School for the Arts students, who are assigned to make a movie with an iPad. The students were provided with iPads and shot their projects over a weekend. The ad shows teams of students using the iPad to shoot and edit different scenes. Some text at the end of the ad notes that the students did use some additional hardware — including a boom mic, dolly, and radio-controlled airplane — but the rest was completed using the iPad and apps downloaded from the App Store. Apple told Mashable that the commercial was filmed entirely on the iPad Air 2, which features an iSight camera that supports 1080p 30fps video.

So can you really shoot a movie with an iPad? Apple thinks so, and it wants to point interested users in the direction of all the tools they’ll need to try their hand at it. On the company’s website, on a page where it shares the Oscars ad and refers to the iPad as “the ultimate tool for independent filmmakers,” it highlights some of the tools that the high school students used to create their films.

They used Final Draft Writer to create production-ready scripts. They used FiLMiC Pro and Manual Camera to leverage the capabilities of the iPad’s HD camera with control over exposure for shutter speed and focus distance. They used GarageBand and the Apogee MiC digital microphone to record high-fidelity dialogue and mix, fade, and trim each audio take. Finally, they used VideoGrade to adjust color and saturation to achieve the mood they envisioned for each film. 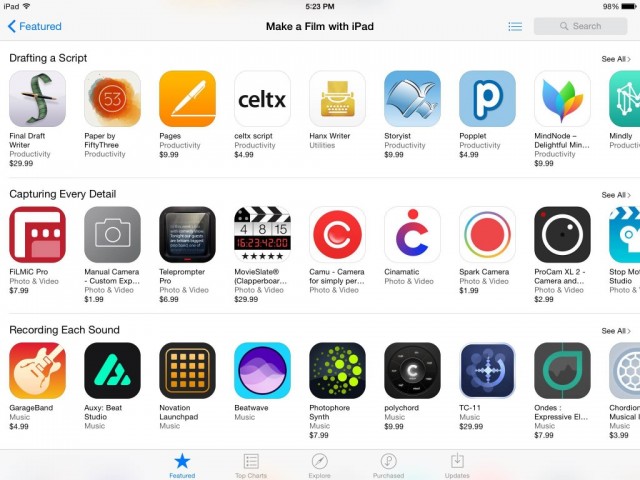 These apps, and the multitude of others available in the App Store, make the iPad a capable tool for shooting, editing, and sharing videos. But as Wired noted last year, making the most of the tablet’s potential requires finding the right combination of techniques, apps, and hardware. Great apps are perhaps the easiest part of that equation for most users to solve. The App Store, when viewed on the iPad, currently features an assortment of apps that enable users to “make a film with iPad,” divided into four categories: “Drafting a Script,” “Capturing Every Detail,” “Recording Each Sound,” and “Creating a Signature Look.” Apple’s picks go beyond the tools used to create the students’ films, and include free, freemium, and paid apps.

(And just in case you’re multitalented or looking to further expand your lineup of creative apps, Apple’s website also features a “story” on how to make music with an iPad, and the App Store currently includes a feature called “Shot in iPhone 6,” which showcases apps that enable users to shoot, edit, and share photos on the newest iPhone.) 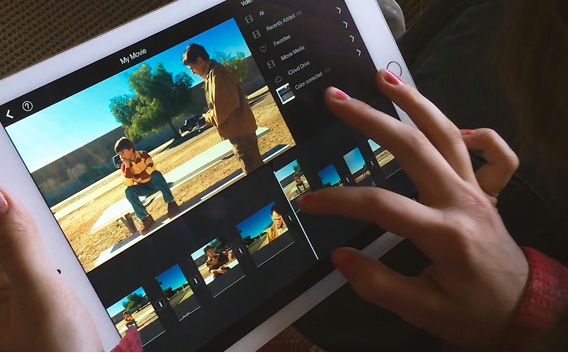 While each app has its own unique set of controls and tools, some basics you’ll want to familiarize yourself with include how to control the exposure or focus (or, at times, set them on auto), how to use image stabilization features to counteract any camera shake, and how to edit your videos by rearranging and trimming clips, muting sound, and adding music. And if you have the budget, you might want to consider include upgrading your hardware with professional-grade lenses, a video rig — which includes housing for lenses, lights, and microphones — or a tripod.

But even with the latest iPad and the top apps, everything doesn’t always go as smoothly as you might imagine when you first envision making a film with an iPad — even if you’re a professional filmmaker. The New York Times recently reported that ABC’s Modern Family aired an episode shot almost exclusively on Apple mobile devices. The writers and editors involved said that shooting the episode, called “Connection Lost,” proved more difficult than they had anticipated. Steve Levitan, the show’s co-creator and executive producer, said, “Everything was shot on the iPhone 6 or new iPads,” and added, “With one or two small scenes shot using MacBook Pros.”

Tony Orcena, an editor on the show, spoke about the learning curve involved in figured out how to shoot the episode with mobile devices. “At first, actors tried holding the iPhones themselves,” he explained. But given the fact that they needed to focus on lines and cues, some shots ended up showing the ceiling or the floor. So camera operators took control of the iPhones, and the actors grabbed the operator’s arm to give the illusion that they were in control of the phone as it moved around.

Hollywood Reporter learned that postproduction on the episode was accomplished in an Avid Media Composer editing system and Adobe After Effects visual effects software. The footage was shot using the H.264 video compression format, which was then ingested directly into the Avid for post. But Orcena explained that there were additional challenges. “It was out of sync in After Effects; the compression wasn’t really cooperating.” He added that the team decided to encode the footage into the Apple Pro Res compression format in Avid, and then bring that into After Effects, for a process Orcena characterized as “the opposite of every post workflow.” In another change from the typical workflow, they skipped the typical color grading process, only grading shots that were shot on a bluescreen.

As the Modern Family cast and crew quickly learned, filming with mobile devices requires a great deal of trial and error, creativity, problem-solving skills, and a willingness to change up your usual routine and workflow. But if none of those requirements deter you, then fire up your iPad and your favorite apps, and you may be well on your way to becoming an iPad filmmaker.