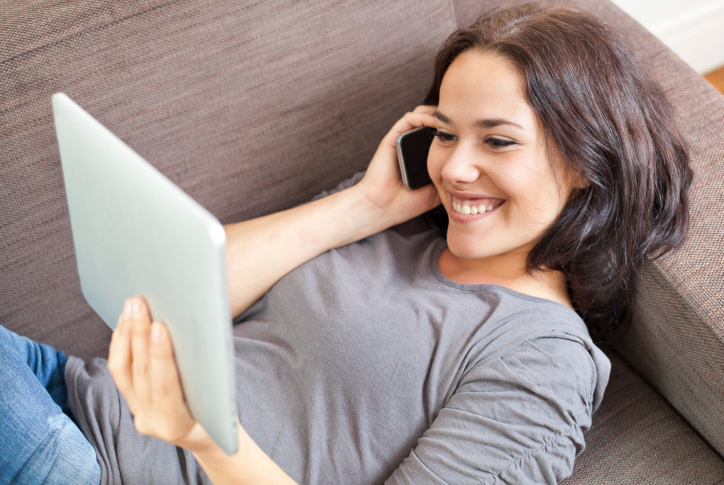 Whether you’re on your phone, your tablet, or a desktop or laptop computer, distraction happens to everyone. You have too many open tabs to keep track of, constant email alerts demanding your attention, long documents open that need reading. There’s just too much going on to stay focused and get anything done. The solution, according to Wired’s Clive Thompson? Put some of those tasks on another screen.

Thompson cites the example of switching between an iPad for reading and a laptop for communicating, and explains: “Now that people have several devices at work—a laptop, a phone, a tablet—they’re finding their way to a similar trick, where they use each piece of hardware for a different purpose. Consider it a new way to manage all the digital demands on our attention: Instead of putting different tasks in different windows, people are starting to put them on different devices.”

As devices become less expensive and more accessible, people can own more devices, which Thompson says they can use to boost their productivity. In the same way that people used to switch between tasks on paper, putting down one file to pick up another, they can do the same on, say, a tablet and a computer by further separating the tasks they need to complete in a work day, shifting their attention between devices instead of between programs or tabs.

“At the heart of this multiscreen life is a counterintuitive realization: that a profusion of devices can help focus one’s attention rather than fracture it. A pile of browser tabs on your laptop becomes mentally confusing; tasks get hidden and maybe forgotten. But when screens are physically separate, the problem evaporates.”

But as NextDraft’s Dave Pell points out, it’s the latest trend toward fixing problems caused by technology with more technology. Can’t keep track of all of the tabs open on your computer? There’s an app for that. (Well, maybe not an app, but AppleScripts and an Opera tab manager). Can’t focus on the report you have to write or the documents you need to read? Send them to a tablet and you’re distraction-free.

The use of multiple devices has become a ubiquitous part of the workday, whether it’s intended to boost productivity and quell distraction or not. Two years ago, Google (NASDAQ:GOOG) created a report called “The New Multi-screen World: Understanding Cross-platform Consumer Behavior.” The report found that 90 percent of consumers switched between devices to accomplish a goal, a habit which Google termed “sequential screening.” Another user behavior, called “simultaneous screening,” involves using two screens at the same time.

Eighty-one percent of consumers surveyed by Google used a smartphone and TV simultaneously. 66 percent used a computer and smartphone simultaneously. And 66 percent used a computer and TV simultaneously. Fifty-seven percent of the time that respondents used a smartphone, they were also using another device. And 75 percent of the time that respondents used a tablet, they were using another device. Engagement in all of those behaviors is almost certain to have grown since Google’s report. As an example, a study by ExactTarget found that two-thirds of consumers surveyed used a mobile device while watching TV at least once a day, and 41 percent of tablet owners used their smartphone and tablet simultaneously at least once per day. And an OMD study found that the average person shifted his attention between his smartphone, tablet, and computer 21 times per hour, according to Business Insider.

The Wall Street Journal recently reported on another trend, which sees workers trying to separate work and personal life by owning and carrying two mobile phones. The trend extends to tablets and laptops as well, as many companies issue devices to employees to use at work — and work-related activities outside of the office. Workers like to keep personal and business devices separate, as a way to alleviate privacy concerns and as an attempt to stave off the encroachment of work messages on personal time.

But the proliferation of mobile devices, whether you have a work phone and a separate personal phone or not, or use multiple devices at the same time or not, makes work more accessible after-hours. A poll by Gallup found that U.S. workers who complete work-related tasks like email outside of the office are more likely to experience substantial stress than those who don’t.

However, the poll also found that workers who email or work remotely outside of the office also rated their lives as better than workers who don’t. That seems related to one of the findings of Google’s 2012 report: “Multiple screens make us feel more efficient because we can act spontaneously and get a sense of  accomplishment – this results in a feeling of ‘found time.’” That psychological effect certainly contributed to Gallup’s discovery of a correlation between those who use mobile technology to stay connected to work outside of the office, and those who are classified as “thriving” based on how they rate their current and future life.

Even when different devices take on different roles, it could be argued that the practical reality of having and using multiple devices presents its own distractions and stress, even if we think that using a variety of devices to stay on top of a variety of work tasks helps us stay focused. What’s to stop the same distractions that plagued you on your laptop from popping up to ruin your “distraction-free” reading on your tablet? In the same that if you add one more app to help control your inbox, you also have to manage that app, using multiple devices requires more time spent managing screens and dividing up tasks.

In a post on Medium, Pell is skeptical that another app or another screen can help us stay on track. “Being more connected can’t cure us of being too connected. Being more wired can’t make us less wired. Using one more app will never equal using one less app. There just isn’t an app for that. The idea that we need a technological solution for too much technology is, at best, the Internet era’s great placebo effect. We feel like we’re getting a little better, but that’s just part of the same addiction. We’ll always be just one more piece of technology away from the solution.”

As people become more connected and more distracted both at the office and away from it, it’s worth asking if working on multiple screens can help you stay productive because it inherently improves your concentration — or if using multiple devices can help you stay productive simply because you think it can. Unless neuroscience or psychology can prove it to be the former, then we’re just trying to solve the problems of technology with more technology.