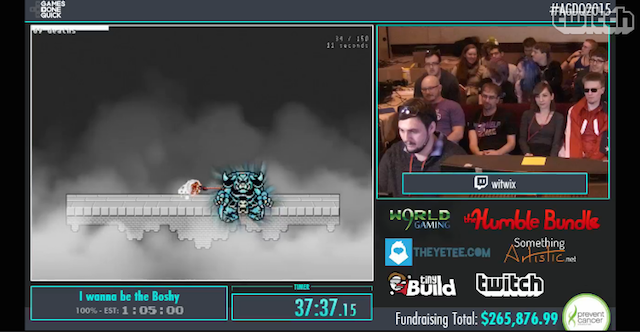 If you enjoy the occasional video game, you should definitely check out Awesome Games Done Quick. Called AGDQ for short, this bi-annual gaming marathon is going on all this week, steamed live through Twitch.

But AGDQ isn’t just a bunch of people sitting down and casually playing video games like how we normal folk do. The idea here is for the players to “speedrun” through games as fast as humanly possible. That means they play with the singular goal of completing certain levels or the entire game without dying or being hit unless doing so would cut down on the run time.

If you tune in, you’ll see some incredible feats of video game mastery. It might sound a little boring, but if it’s a good run, just watching it happen can be incredibly exciting. Here’s a quick FAQ to get you up to speed on what AGDQ is and why it exists.

What’s the goal of the marathon?

AGDQ is a charity event put on by the speedrunning site Speed Demos Archive. They’ve teamed up with the people behind HumbleBundle to offer up a bundle of PC games that can be yours for whatever price you feel like paying. Proceeds go to the Prevent Cancer Foundation. If you don’t want the games, you can donate directly here.

At the time of this writing, AGDQ has raised over $250,000 for the foundation, with many days left to go. Last year, the marathon raised over $1 million.

What’s the point of speedrunning?

The whole idea of speedrunning a game means to play through it quickly. Speedrunners put different rules on different runs, so sometimes they want to play through every level in the game, while other times skipping levels or warping ahead is permitted. But watching a talented speedrunner play a game can be thrilling. If it doesn’t sound like fun to you, you should check it out to see the appeal.

Is speedrunning all they do during the marathon?

No. Sometimes they do races, where multiple speedrunners will play through a game at the same time to compete for the fastest run. Other times, if a game would take too long to speedrun all the way through, they’ll hop to particularly interesting or challenging stages to show secrets and tricks.

What if I don’t understand what I’m watching?

It can be a little tough to tell what’s happening in some games, particularly ones you haven’t played. To help out viewers of AGDQ, there’s always someone — often the person doing the speedrun — who narrates the run, explaining the tricks being used, the particularly challenging parts, and anything an unfamiliar viewer would want to know. Not only does that help you understand what you’re seeing, but it also gives you hints for how you can speedrun the game yourself if you’re feeling ambitious.

What games do they play?

AGDQ participants play games from all eras, ranging from early PC games to brand new titles that came out just a month or two ago. The only prerequisite is that speedrunners have had time to play the games enough to master the mechanics, plan their routes through the levels, and practice until the skills are burned into their muscle memory. Here’s a schedule of all of the games and times for this marathon.

How long will it go on?

Since AGDQ is a marathon, the stream runs 24 hours a day all week, ending at 1 a.m. on January 11. If you miss out on a game you wanted to see, you can check the YouTube archive of the event here.