What Apple Could Do With Newly-Patented Flexible Screens

If the technology in Apple’s newest patent makes it to a future iPhone or iPad, your mobile devices could have a flexible screen that turns into tactile buttons, a raised keyboard, a microphone, and speakers. Apple’s U.S. patent number 8,816,977 for “Electronic devices with flexible displays,” first spotted by Apple Insider, outlines how flexible screens can be positioned over internal components like microphones, speakers, pressure sensors, or even actuators that create physical changes in the display as users interact with the device.

The patent notes the improvements that the technology would represent, relative to the way that devices are currently built. While input-output components like buttons, microphones, an speakers are effectively placed in port openings formed in the housing or display cover of a device, their placement can be “aesthetically unappealing,” raise the risk of environmental damage from moisture or dirt, and even reduce the amount of active display area.

The display system described in the patent combines a flexible display layer (like an OLED) with a flexible touchscreen layer (a sheet with transparent capacitor electrodes) and a flexible or rigid cover layer. They could also be supported by a structure on the underside of the flexible layers. Because the system is flexible, users can interact with the components through the display. Sound waves from a speaker or vibrations from an actuator could pass through the display, for example. But here’s where it gets interesting: Apple notes that the components beneath the display could actually change the surface of the display as users interact with it.

“Components may receive input or may supply output through a physically deformed portion of the flexible display (e.g., a deformation that occurs when a user presses on the display to compress the component). In some configurations, a portion of the flexible display may serve as a membrane that forms part of a microphone, speaker, pressure sensor, or other electronic component.” 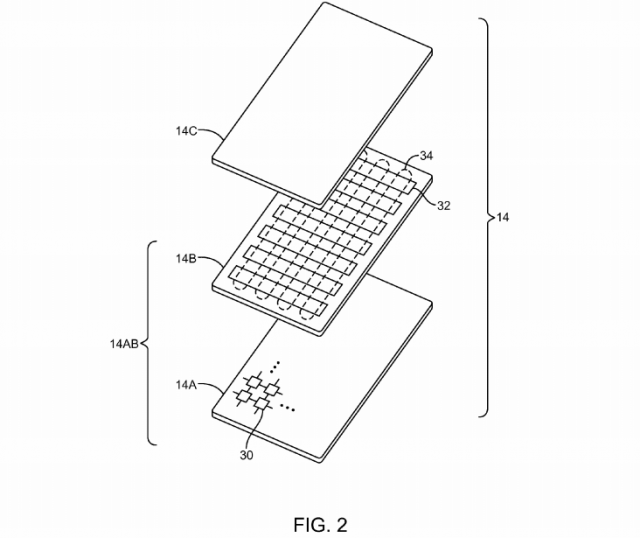 Users’ interaction with specific components underneath the screen could also yield audio or tactile feedback, and Apple gives the example of how structures inside the device could be pressed against the flexible display to temporarily create a home button, or create a grid of ridges that form the outline of a keyboard. Since the display is flexible, users can apply force to the raised, interactive areas and activate internal buttons, switches, and other sensors, which can then recede below the display again.

The full list of internal components that the patent says may be layered under the screen includes: “buttons, switches, microphones, actuators such as solenoids, motors, and piezoelectric actuators, connector ports, touch screens, proximity sensors and other components for accepting input from, or transmitting information to, a user or the surrounding environment.”

In some embodiments, placing these components internally would allow Apple to enlarge the device’s active screen area, replacing external controls like the current iPhone’s home button with an internal version, and eliminating the need for those controls to take space away from the active display area. The patent also notes that hardware and software components could be used to process a users’s touches on the display.

Possible gestures listed in the patent include pinching, sliding, swiping, rotating, flexing, dragging, and tapping. And interestingly enough, Apple adds that each gesture could be performed with one or more hands or by one or more users (“or any combination thereof”).

Additionally, audio components like speakers and microphones could include a diaphragm, either attached to or integrated into the flexible display, and a simple magnet and coil speaker could induce motion in the diaphragm to emit sound through the display. Conversely, in the case of a microphone, vibrations in the flexible display could be transmitted to the diaphragm and then the coil to transmit the information to the device.

Another possibility outlined in the patent is for Apple to create hybrid internal components that are comprised of both an internal component and a structural component that would cause a temporary or permanent change to the flexible display in order to indicate to users where the component is without visual aid. That would be especially useful for consumers with visual impairments, and the technique could be used to show the location of either one or a variety of components. 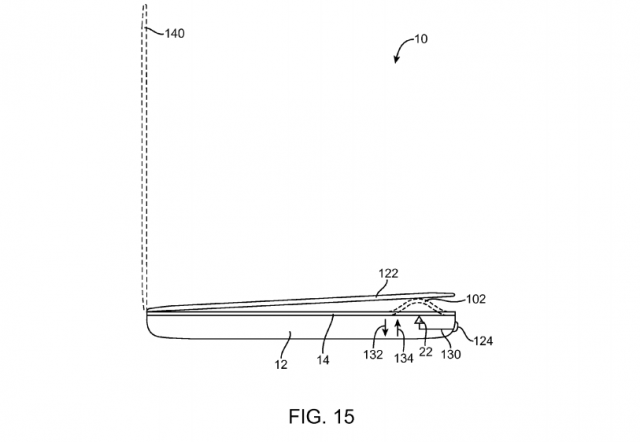 While, of course, it’s so far unclear if these features will figure in to future releases of Apple products like the iPhone, iPad, or MacBook, the flexible display system could provide a larger, more continuous display area, and even do away with some of the physical buttons to which we’ve become accustomed.

Additionally, the ability to output or detect sound through the screen could eliminate the need for external speakers and microphones. More than just a gimmick that would let you roll up your iPhone to put it in your pocket, a flexible screen system could bring a variety of improvements to Apple’s products.