What Are Investors To Do With Apple and its Terrible Technicals?

The market continues its fascination with Apple’s (NASDAQ:AAPL) downfall. The stock has now shed approximately 50 percent of its once record-setting market cap, which exceeded $700 billion in September 2012. In this article I will take a detailed look at Apple’s fundamentals vs. key competitor Google (NASDAQ:GOOG), with an occasional comparison to Amazon (NASDAQ:AMZN) as well.

Let’s start out with a quick tour of Apple’s profile (all data are from S&P’s Capital IQ, unless otherwise specified). With a market cap of $365 billion, the stock is still a major presence in the NASDAQ 100. Their ROIC of 232 percent is off the charts, and despite a Friday, April 19, closing price of $390.53, the analysts’ consensus target price 12 months from now is $190 higher, at $580.

Although the stock is not much to look at from a dividend yield perspective (1.4 percent), their P/E of 8.8 is lower than technology down-and-outers such as Intel (NASDAQ:INTC) at 9.4 and Cisco (NASDAQ:CSCO) at 11.4. Does Apple really merit a P/E multiple usually reserved for deeply troubled companies? We’ll seek to answer that question with a thorough look at the company from a fundamental perspective.

Hard to think of another company that could compete with these results. Of course, the market is a forward-looking discounting mechanism, and after we complete the historical tour, we’ll model Apple’s future a little later in the article.

Apple’s historical profit margins and yields look anything like those of a challenged company. Not only are operating and free cash flow margins large — in the 20 percent to 30 percent range — but the trend is up for both metrics. As a new dividend-payer Apple’s dividend yield is unexciting, but at $390/share the stock has an earnings yield of 11.4 percent. Not a lot of double-digit earnings yields to be found these days.

Apple’s stock performance chart looks like a horror movie. Despite a rough 12 months for technology stocks in general, Amazon and Google managed to post returns of 20-35 percent over the period. Apple is down 30 percent year-over-year, and 50 percent since its all-time high in September 2012. Without question, that is one ugly stock chart. 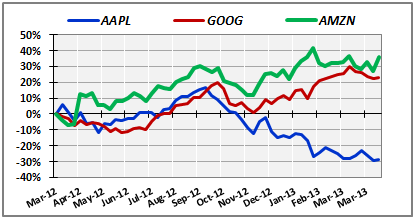 The fundamental process I follow first compares the level and trend of per-share fundamentals with a key competitor. We’ll match Apple against Google in the following charts. In terms of revenue per share (the primary source of all fundamentals), Apple is the clear winner. They’ve grown revenue/share from $40 to $170, while Google’s revenue/share has “only” expanded from $70 to $150 over the same period. 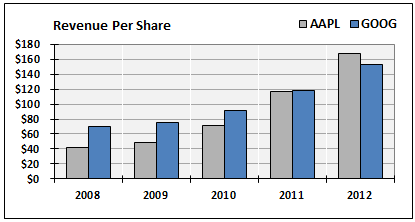 The tendency for Apple to beat on per share fundamentals continues for the next several charts. They’ve overtaken Google in terms of EBITDA/share: 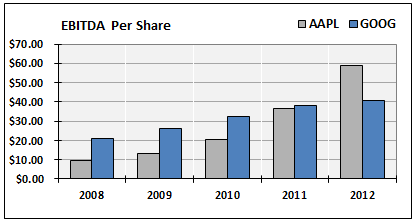 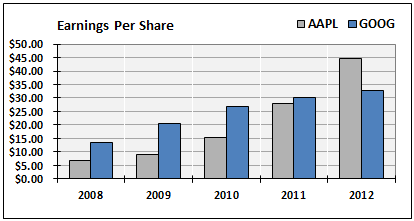 Net operating profit after tax, or NOPAT, per share: 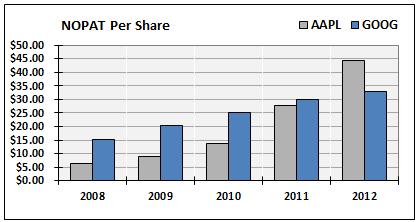 and Apple’s per-share profits are well supported by free cash flow per share: 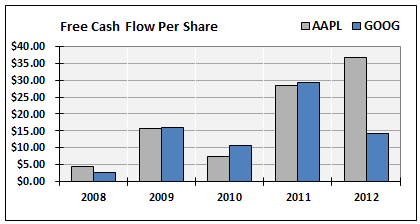 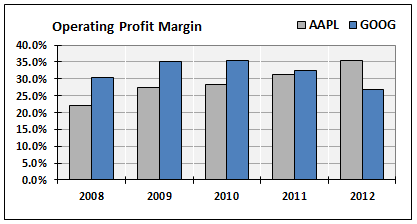 In terms of relative valuation, Apple’s free cash flow yield has been expanding, climbing to 7.0 percent in 2011 and topping 9.0 percent in 2012, while Google’s has never exceeded 4.5 percent. 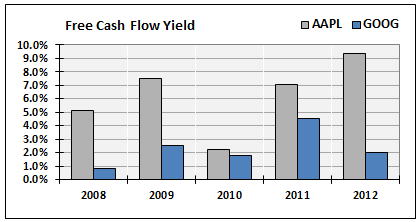 Both stocks’ price to sales ratios have been declining since 2009, with Apple’s stock consistently providing better value based on this metric. 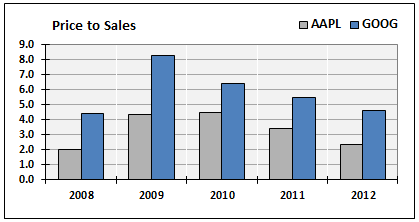 Next we’ll look at the classic profitability ratios. Apple’s ROA has expanded every year for the past 5 years, most recently topping 24 percent. Google’s ROA shows a four-year downtrend, compressing all the way down to 11 percent in 2012. 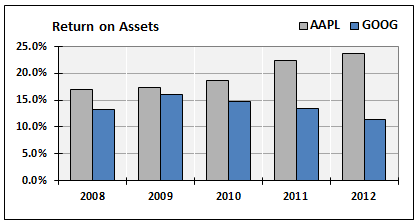 Return on equity shows a similar pattern. Apple’s ROE of 35 percent is more than double Google’s ROE of 15 percent. 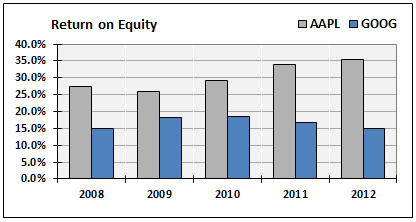 Apple is an absolute killer in terms of ROIC, another key driver of value creation. Google’s ROIC has never exceeded 50 percent, while Apple’s ROIC has been well above 200 percent in both 2011 and 2012. 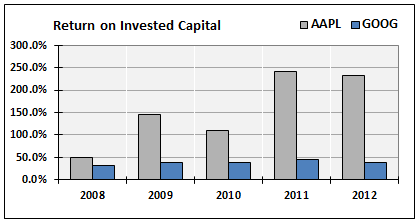 Economic value-added, or EVA, is one of the purest measures of value creation. While both companies generate large and growing EVA/share, Apple has also overtaken Google based on this metric. 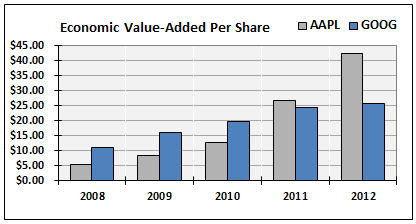 Next we’ll examine trends in Apple’s key income statement drivers as we set up for our discounted cash flow analysis. Apple’s 5-year revenue growth CAGR is 44.8 percent. Gross margins have expanded from 35 percent to 44 percent, with operating margin expanding from 22 percent to 35 percent. Net margin shows a similar trend. Common shares expand as stock options are exercised, but the average yearly rate of 1.6 percent does not dilute Apple’s valuation severely.

Now that we’ve considered the trend in the income statement drivers, we’ll forecast Apple’s future income statement. Years 2013-2016 are explicitly forecasted, with 2017 representing our horizon forecast — the values we model in perpetuity. I’m going to really stress Apple in the forecast to build in a solid margin of safety, as the general consensus is that the company’s operating performance will begin to suffer from competitors like Google and Samsung (SSNLF.PK).

This reverses half of the gains in margins Apple has earned in recent years. As a new dividend payer, Apple will probably devote a fair amount of energy to growing dividends. I taper dividend growth from 16 percent to 6 percent, and use a perpetual dividend growth rate of 4.0 percent, slower than slow-growing, large-cap dividend plays like Johnson & Johnson (NYSE:JNJ). Once again, all the forecasting assumptions are deliberately conservative.

To calculate Apple’s weighted average cost of capital, or WACC, I bumped their historical beta up from 1.03 to 1.20, which raises their WACC to 10.1 percent (very high in this low-yield market). The higher WACC will suppress Apple’s per share intrinsic value in the DCF model. 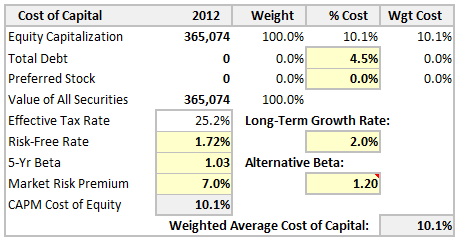 The table below shows Apple’s estimated per share intrinsic value each year from 2012 to 2017. Even with the conservative modeling assumptions, Apple has a DCF intrinsic value of $539/share, $149 higher than Friday’s closing price of $390. Granted, the squeezing of the margins in the forecasts puts the stock on a very slow-growth trajectory, but a per-share increase of $200 over the next 5 years (with dividends also likely to grow) is not something too many investors would complain about. The stock models up as extremely undervalued at $390/share.

Let’s turn our attention to some metrics typically associated with competitive positioning. In the exhibits that follow I use 3 stocks — Apple, Google, and Amazon — and treat them as a 3-stock market. The graph shows that, based on the total sales revenue of the 3 companies, Apple is gaining market share while both Google and Amazon lose some share. This is just a fancy way of showing how much faster Apple has been growing, even against star stocks in the same sector. 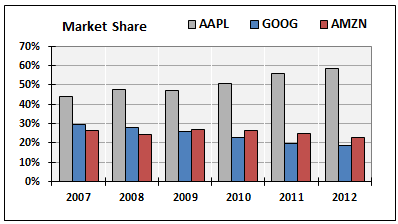 Apple has certain cost advantages over Google and Amazon as well. Apple spends far less on research and development per dollar of sales, which is truly amazing when you consider that the company is still viewed as the greatest innovator of all time: 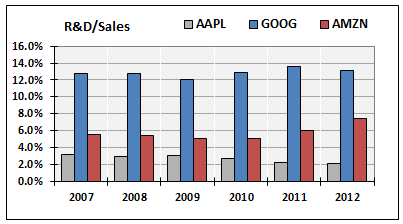 Apple has consistently spent less on CAPEX/sales than Google, and spent less than both companies in 2012. 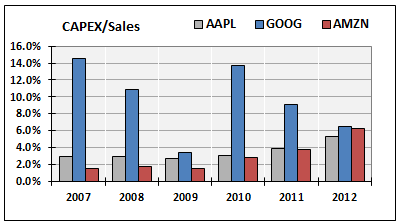 Apple also dominates in terms of selling, general and administrative expense per dollar of sales. 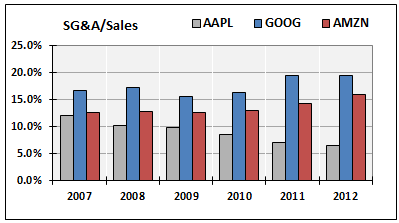 The exhibit below takes a different look at Apple, using tools provided by EVA Dimensions, LLC. Their PRVit (“prove it”) scorecard ranks Apple as a buy, based on a combination of intrinsic value (ranked in the 94th percentile of the Russell 3000), and actual valuation (ranked in the 48th percentile). EVA Dimension’s PRVit system shows that Apple is fundamentally more attractive than 84 percent of the stocks in the Russell 3000. 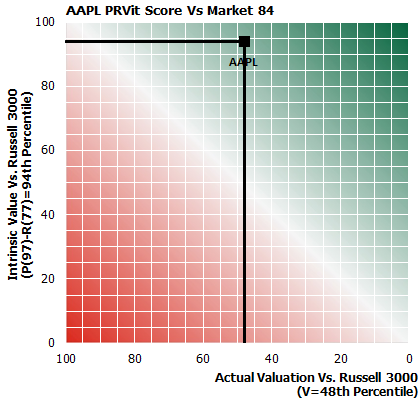 Of course, Apple’s technical chart looks like something out of a Freddy Krueger movie. The stock price has totally broken down, plunging ever-further below its 200-day moving average for the past 3 weeks. The MACD is increasingly negative, indicating that the negative price momentum is accelerating. The only small bright spot in the chart is the relative strength index, or RSI, suggesting the stock is temporarily oversold. 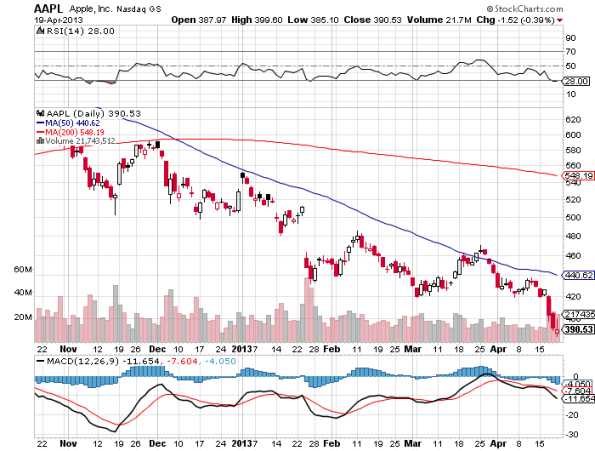 Summing up, Apple’s profound stock price decline of approximately 50 percent over the past 7 months has left it in desirable fundamental territory. It outperforms Google based on virtually every fundamental measure, and a discounted cash flow model using very conservative assumptions suggests the stock could be undervalued by as much as $190/share.

Technically, the stock looks terrible, of course, so it’s hard to pull the trigger and issue a full-fledged buy recommendation right now. The stock bears close watching, however. If technical sentiment turns, or Apple announces a significant reinvigoration of its product line, or a competitive resurgence in the iPhone/iPad space, or even Apple TV, the stock could easily regain $100 a share or more and still be fundamentally undervalued. Apple belongs on every investor’s watch list.

Robert A. Weigand, Ph.D. is a Professor of Finance and Brenneman Professor of Business Strategy at Washburn University in Topeka, Kansas. Dr. Weigand’s first full-length book, Applied Equity Analysis and Portfolio Management, is scheduled to be published in early 2014. You can read more from Dr. Weigand on his blog or follow him on Twitter at @APM_at_Washburn.

Disclosure: The author owns no shares of Apple at the current time.

Don’t Miss: Is Intel Dissing Apple in Favor of Google and Microsoft?