What Could a Second iPhone Camera Mean?

For the circles of the tech community that trade in Apple rumors, patent applications, and speculation, the iPhone 6 and iPhone 6 Plus are old news. Observers and enthusiasts are already trying to figure out what Apple is planning for its next iPhone. If respected Apple commentator John Gruber is correct, the most important innovation of Apple’s next iPhone could be “the biggest camera jump ever.”

According to Apple Insider, Daring Fireball’s Gruber revealed in the latest episode of his podcast that a source reports Apple is working on a two-lens system for the next-generation iPhone. Gruber explained:

The specific thing I heard is that next year’s camera might be the biggest camera jump ever. I don’t even know what sense this makes, but I’ve heard that it’s some kind of weird two-lens system where the back camera uses two lenses and it somehow takes it up into DSLR quality imagery.

It sounds a little far-fetched to think that adding a second lens to the iPhone would enable it to suddenly generate DSLR-quality images. But Apple is serious about the quality of the iPhone’s camera, which Forbes notes is the world’s most popular camera, according to data from social networks and photo-sharing site Flickr. Though it stuck with an 8 megapixel camera in the iPhone 6, choosing not to engage in the megapixel wars begun by other smartphone makers, Apple added improved autofocus with focus pixels in the iPhone 6’s iSight camera and optical image stabilization in the iPhone 6 Plus. 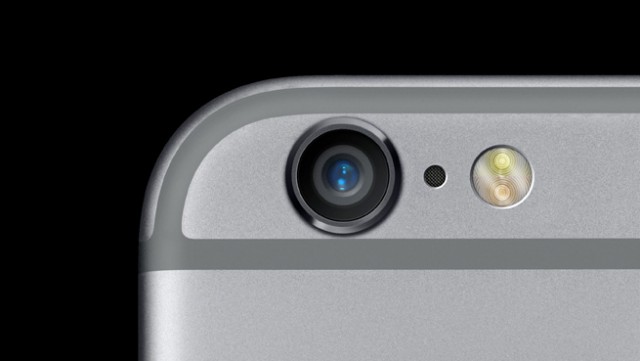 It’s clear that Apple is committed to making continual improvements to the iPhone’s camera, even as it makes the phone itself consistently thinner. The new iPhone 6 is so thin, in fact, that the rim of the camera lens actually protrudes from the back of the phone. It’s unclear if Apple would be able to make room for a second lens in the back of its next iPhone.

As Apple Insider points out, the idea of using multiple lenses in a smartphone is a relatively new concept. Corephotonics, a startup that Engadget reported in February, has been pitching the idea of dual lens cameras to smartphone makers, and has developed a system that uses two lenses of two different focal lengths. One is a wide-angle lens, while the other is set to 3X zoom. The pairing enables users to magnify subjects without resorting to digital zoom, and essentially negates the problem of the resolution drop that typically occurs with digital zoom. The two lenses, each with their own sensor, also deliver improved performance in low light.

In March, HTC unveiled the One M8 with a dual rear camera system. The One M8 combines a standard sensor with an “ultrapixel” sensor that lets in much more light, to improve image quality. The secondary lens provides information to the primary lens, and the system records information about the depth of objects along with the actual image, enabling users to select the background and foreground for editing or adjust focus after the photo is taken.

The latter capability is reminiscent of the “light field photography” cameras produced by Lytro. Lytro’s cameras enable users to refocus photos after they’re taken, change the perspective in a picture, and create interactive pictures that can be refocused and shared online. The company’s website notes that it is “transforming the camera into a powerful computational photography platform.”

Apple has amassed an array of camera-related patents of its own. They include patent number 8,593,564, for a “Digital camera including refocusable imaging mode adaptor,” which describes a plenoptic or light-field camera that uses a microlens array in the form of an adaptor, rather than as the fixed component that Lytro uses, to enable users to take a photo at a given resolution and refocus the image after the fact.

Patent number 8,638,369, for the “Back panel for a portable electronic device with different camera lens options” and patent number 8,639,106, for “Magnetic add-on lenses with alignment ridge” deal with different systems to attach interchangeable lenses and camera modules to a device like an iPhone. A simple component might be a wide angle lens, while more sophisticated modules would add capabilities for image stabilization or zoom.

This patent may be Apple’s most relevant so far, to Gruber’s speculation, because it describes how each sensor would also have its own lens assembly. The sensors can be included on a single circuit board or separated. In March, Apple also applied for another patent, for an “Electronic device with two image sensors,” according to Apple Insider.

The application describes how one sensor would capture data on luma, or brightness, while the other would capture information on chroma, or color. The final image would combine data from both sensors, and a major advantage afforded by splitting the camera module in two would be the resulting thinness of each camera module, and the corresponding thinness of the device itself.

While it seems unlikely that Apple will implement a three-lens camera anytime soon, is the two-lens system that Gruber expects any more plausible an addition to expect with the next iPhone? It’s unclear how the dual lens system that Gruber thinks is in development would work, or how closely related it could be to any of the patents that Apple has applied for or been granted.

But will an iPhone eventually compete with the DSLR for the affection of users who need the camera to perform well in low light, or take excellent action shots? With the iPhone 6, Apple has already added more controls and capabilities to help the camera perform better in situations that have traditionally challenged smartphone cameras. But whether the iPhone will be able to compete with a DSLR depends on the consumer’s definition of a DSLR, and the functionality that he or she needs from a camera.

An iPhone, for example, won’t be able to shoot images in the RAW file format, an essential for photographers who process their photos in programs like Lightroom or Photoshop. Even with multiple or interchangeable lenses, an iPhone won’t provide the variety of focal lengths and exposure settings that a DSLR offers. And even if Apple joins the megapixel wars to compete with the ever-increasing resolutions of other smartphone makers’ cameras, the iPhone will not be able to match the size of a sensor in an actual DSLR.

Comparative sizes of the sensor of the iPhone 6, an entry-level DSLR, and a professional DSLR are visualized in the table above. It illustrates that while the resolutions of smartphone cameras can continue to climb, the sensor size won’t match that of a DSLR.  Ultimately, the quality of a smartphone’s camera is subjective, based on the expectations of the user and the purposes for which a photo is intended. Future iPhone cameras will undoubtedly continue to escalate in quality and capability, but in all likelihood will be comparable to a DSLR only for the users who don’t need the camera’s full functionality, even if they sport a next-generation two-lens system.