What Google Project Fi Has Right, and What It Has Wrong

For months, tech bloggers and industry watchers have speculated about what would happen when Google launches the “Nexus of phone networks.” Now, we’ll finally get to see that scenario play out. In a post on its official blog, Google made the official announcement that it’s launching a wireless service called Project Fi in partnership with Sprint and T-Mobile. Many details of Google’s new mobile service leaked recently via an app discovered in an unofficial Nexus 6 firmware image.

“Similar to our Nexus hardware program, Project Fi enables us to work in close partnership with leading carriers, hardware makers, and all of you to push the boundaries of what’s possible,” wrote Nick Fox, Google’s vice president of communications products. “By designing across hardware, software and connectivity, we can more fully explore new ways for people to connect and communicate.”

What does Google do right with Project Fi?

A major selling point for Project Fi is that it offers better coverage by automatically connecting you to “more than a million free, open Wi-Fi hotspots we’ve verified as fast and reliable” and to Sprint or T-Mobile’s LTE networks. When you’re not on Wi-Fi, the service moves you between the partner networks based on which is delivering the fastest speed at your location. If you begin a call while connected to Wi-Fi and then exit the network’s range, your call will “seamlessly” transition from Wi-Fi to one of the cell networks. Project Fi will also encrypt data on Wi-Fi networks.

The phone number you use with Project Fi “lives in the cloud,” which means that you can use the same number on your phone, Hangouts-compatible tablet, and computer. For now, Project Fi offers a single plan: for $20 each month, users get talk, text, Wi-Fi tethering, and international coverage in more than 120 countries. Google charges $10 for 1 GB of cellular data, $20 for 2 GB, $30 for 3 GB, and so on, and if you use less than 5GB of data per month, Project Fi’s plan is cheaper than what you can get from AT&T, Verizon, or T-Mobile. 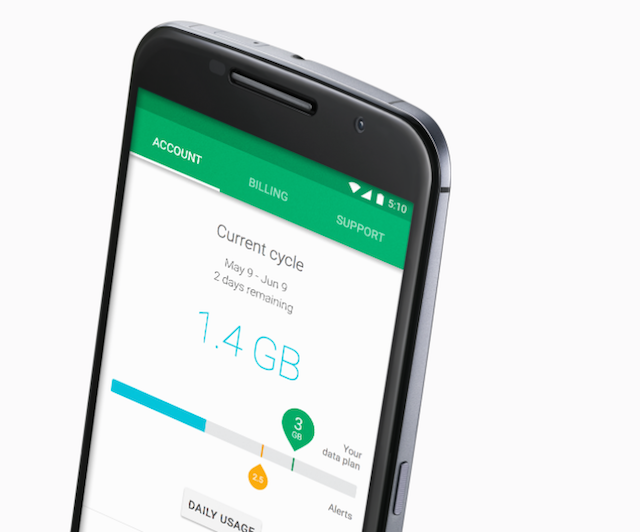 A headline-grabbing feature of Project Fi is that it will let you to pay only for the data you use. At the end of the month, you’ll receive credit for the value of your unused data. Venture Beat notes that Sprint and T-Mobile are the two major carriers that have the least to lose in letting Google use their networks and possibly take some of their subscribers, as they have long trailed AT&T and Verizon in terms of subscriber count.

Project Fi offers an excellent value for users who don’t want to play the games that the major carriers use to get consumers to pay more for extras and options that they don’t actually need or use.

Perhaps the biggest drawback of Project Fi is that you can only use the Nexus 6, which is both an expensive device and, according to Google, “the first smartphone that supports the hardware and software to work with our service.” It’s not clear when you’ll be able to use a phone other than the Nexus 6 with Project Fi. (The service will be available in most of the U.S. but is so far by invitation only. If you have a Nexus 6 and want to try out Project Fi, you can sign up for an invite here.)

The FAQ page for Project Fi explains that the Nexus 6 is the first smartphone to work with the Project Fi SIM card, “which supports multiple cellular networks, and a state-of-the-art cellular radio tuned to work across network types,” says Google. That has a lot to do with the complexities of the tech behind Sprint and T-Mobile’s networks. In the U.S., carriers use two wireless technologies that are incompatible with one another.

Verizon and Sprint use CDMA, while AT&T and T-Mobile use GSM. GSM networks use a removable SIM card to identify a phone, while CDMA networks integrate the same information into the phone itself. If you have a CDMA phone without a SIM card slot, you can’t use it on a GSM network (though LTE-capable phones all have SIM card slots, regardless of the carrier they’re purchased from, because LTE networks in the U.S. use GSM technology).

Last year, when rumors of a potential merger between Sprint and T-Mobile were making the rounds, there was much talk of what it would look like to create a service that combined them. Phil Goldstein wrote that it would be “immensely complicated” to combine the two networks because they each use a variety of technologies — T-Mobile uses GSM, HSPA+, and LTE, while Sprint uses CDMA and LTE — and “the only major spectrum band that Sprint and T-Mobile have in common is 1900 MHz, which Sprint uses for CDMA and LTE and T-Mobile uses for HSPA+ service.”

Sascha Segan wrote for PC Mag that Sprint and T-Mobile “are not aligned in any way” thanks to the “mess” of the carriers’ various spectrum bands. So what does all of this mean? You couldn’t use just any phone with Project Fi, because not every phone will be compatible with the two networks it would need to switch between.

Another drawback of Project Fi is that the T-Mobile and Sprint networks don’t have the reach and tower density that AT&T and Verizon’s networks do, and we don’t know how a mashup of the two will work out in the real world. As Android Police’s David Ruddock notes, the Project Fi LTE map reveals less-than-impressive coverage, Project Fi doesn’t offer any high-speed international roaming, and it doesn’t offer group plans or family discounts.

Additionally, Google isn’t the only MVNO offering a cheaper alternative to the four major carriers with which most users have signed on. Some alternative carriers already offer services that are cheaper than or comparable to the plan offered on Project Fi. (Tech Cheat Sheet recently reported on four inexpensive smartphone plans that cost $20 or less per month.) Project Fi’s price structure will actually make it more expensive than existing options for users who need a lot of data, and there’s as yet no unlimited plan for heavy data users.