What Is the Apple SIM and What Could It Mean? 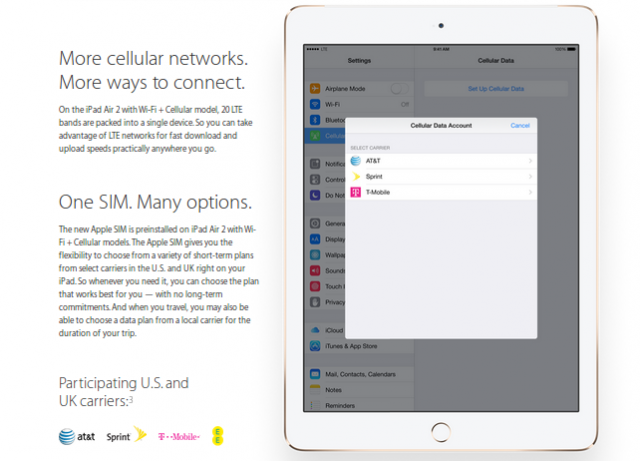 In the future, will you be able to switch mobile carriers with the touch of a button on a menu in your smartphone? If the Apple SIM in the newly launched iPad Air 2 eventually makes it to the iPhone, it’s possible that you could. Without mentioning it once at its iPad and Mac media event, Apple introduced the addition quietly on its website. But, like anything Apple does, the Apple SIM has hardly escaped the spotlight, and many are already optimistic that it could represent the beginning of an eventual change in how our tablets and mobile phones work. So what is the Apple SIM? What does it do now? What changes can it effect in the future?

Let’s start at the beginning with what the Apple SIM will do in the new iPad. The iPad Air 2 will come with a new Apple SIM card from Apple, instead of one specific to each mobile carrier. Apple lists three of the U.S.’s top four carriers as partners: AT&T, Sprint, and T-Mobile are on board, with only Verizon absent, though the page notes that participating carriers “are subject to change.” As Apple explains on its page for the iPad Air 2:

“The new Apple SIM is preinstalled on iPad Air 2 with Wi-Fi + Cellular models. The Apple SIM gives you the flexibility to choose from a variety of short-term plans from select carriers in the U.S. and UK right on your iPad. So whenever you need it, you can choose the plan that works best for you — with no long-term commitments. And when you travel, you may also be able to choose a data plan from a local carrier for the duration of your trip.”

While the Apple SIM isn’t technically a “soft SIM,” a virtual SIM, or even a non-removable SIM, it’s a standard SIM that can be associated with multiple carriers, as the International Business Times reports. The Apple SIM enables users to switch service providers right on the device instead of changing a physical SIM card to change carriers. In the 4G version of the tablet, users will find a nano SIM card in the SIM card slot — a SIM card from Apple, not the mobile carrier.

SIM cards — SIM stands for “subscriber identity module” — store an identification number, a serial number, security information, network data, a PIN, and a personal unblocking code. The SIM card enables the mobile carrier to identify your phone, and while they were originally intended as a way to ensure that consumers could switch carriers without registering the device, carriers offer subsidized contracts that keep consumers locked in for the duration of a contract.

Conversely, a soft SIM refers to a system where the device doesn’t actually need a physical, replaceable SIM card to be placed into the slot on the device. Apple and other tech companies have reportedly been working on an eventual switch to that system, but such a transition is still likely to be years away. Apple is likely using the Apple SIM on the iPad as a way of introducing to consumers the concept of selecting a short-term data plan from among offerings by multiple carriers, and the company will closely watch how users react.

For now, the addition won’t effect a whole lot of change. Most iPad owners buy a model that depends only on WiFi, and those who do buy one with a cellular radio often use it only for traveling, or otherwise take advantage of the fact that many data plans for the iPad already operate on a month-to-month basis.

It’s premature to speculate much about the specifics of the feature’s potential extension to the iPhone, but it’s likely that Apple will extend it to more carriers and more countries, and perhaps even add it to future iPhone models. If and when it does get to the iPhone, it could easily change the mobile industry — though Apple would have a lot of roadblocks to negotiate in getting the Apple SIM to the iPhone, which both accounts for more than two-thirds of the company’s profits and is largely subsidized by carriers.

Phones are typically distributed by carriers, and locked to the carrier’s specific network with a multi-year contract. As Quartz reports, consumers rarely change carriers, in part because it’s inconvenient to do so. But Apple has taken a more direct role in the distribution of its devices than some of its rivals, and it could take even more control by tying the consumer’s phone number, messaging, voicemail, etc. to the Apple SIM.

Carriers would then compete for consumers, who would be more likely to choose a carrier based on the rates or benefits offered, rather than convenience. As users of the new iPad Air 2 will be able to choose short-term plans, the iPhone could potentially offer the same choice of carriers and no-commitment plans. Quartz’s Dan Frommer notes that the phone could even shop constantly for the cheapest connection, and at Forbes, Parmy Olson notes that Apple could put in either a voice and data SIM into the iPhone, or just a data SIM. The integration of an Apple SIM that deals only with data could lead to thinner margins for carriers.

Owners of Apple devices are already familiar with the disassociation of messaging from a phone number with iMessage. With the Handoff feature introduced with iOS 8 and OS X Yosemite, users can answer a call that would previously have been directed just to the iPhone with their iPad or Mac. Bringing the Apple SIM to the iPhone could further disassociate the core communication functions of the phone from the phone number, which has traditionally been time-consuming to port when a customer switches carriers.

While the extension of the iPad Air 2’s Apple SIM concept to the iPhone would likely lead to lower data prices in metropolitan areas where multiple carriers have coverage, it could lead to higher prices in areas where only one provider has coverage. Additionally, Apple could potentially dictate which carriers are allowed to appear as options. Further down the line, if the Apple SIM or soft SIMs cause an eventual move away from physical SIM cards, consumers wouldn’t be able to select a service that the OEM hasn’t listed as an option.

While the Apple SIM may be the first step in that direction, huge industry changes won’t happen overnight. A widespread switch to a true soft SIM system would require significant technical work, and both consumers and carriers would take considerable time to adjust to a new system of buying and selling voice and data subscriptions. While the Apple SIM’s introduction with the new iPad likely appeals to carriers, who likely want to sell even short-term contracts to iPad users, it will undoubtedly be met with more resistance if Apple moves to take it to the iPhone.