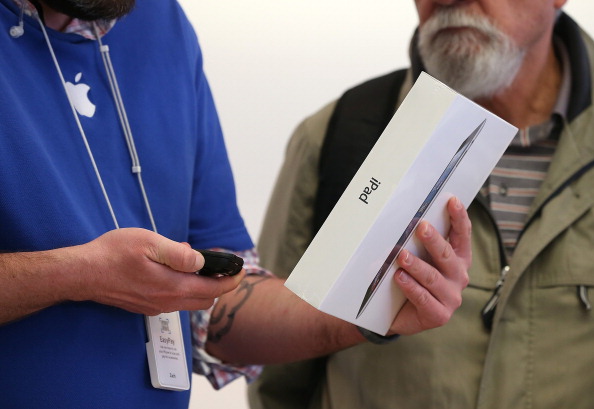 With just one day to go until the media event where it will unveil the next generation of iPads, Apple accidentally (or purposely? perhaps we’ll never know) leaked images of the new products on the iTunes Store. As 9to5Mac was the first to report, screenshots of the iPad User Guide for iOS 8.1 that appeared in iBooks featured the upcoming iPad Air 2 and iPad mini 3, which will be formally debuted at Apple’s iPad event tomorrow. The screenshots confirm that both iPads look nearly identical to the preceding models, but feature Touch ID sensors in the Home button. The images also confirm that the iPad Air 2 will be able to take photographs in Burst Mode.

The User Guide for iOS 8.1 and the iPad images it contained have been removed from iTunes, but the presence of the iOS 8.1 user guide likely means that the release of iOS 8.1, which is expected to bring the official launch of Apple Pay, could be on the agenda for tomorrow. As Mashable recently reported, Apple is thought to be close to launching the mobile payments platform, with a memo to Walgreens managers pointing to the possibility of a launch date as early as October 18. Apple has already begun training its retail staff on Apple Pay, which further supports the theory that the service’s launch is imminent.

So what else can we expect to see from Apple’s iPad and Mac event on October 16? Apple is expected to unveil additions to the iPad lineup, improvements to its Mac lineup, and new software for iPhone, iPad, and Mac.

Thinner, faster iPads with a number of improvements

The iPad Air 2 is expected to feature an A8X processor with 2GB of RAM, plus an improved camera, an antireflective coating, a slightly thinner build, and support for Apple Pay — which will take advantage of the new integration of TouchID fingerprint recognition. Additional RAM could enable Apple to roll out the split-screen multitasking feature reportedly developed for iOS 8.

As 9to5Mac reported, the alleged leak of an image showed the A8X processor, which indicates that Apple is moving toward separate, more powerful processors for iPads. When the first-generation iPad Air launched last year, Apple equipped it with the A7 processor, the same chip used in the iPhone 5s. If the image is genuine, it seems that Apple isn’t using the same A8 chip from the iPhone 6 and iPhone 6 Plus in the new iPad Air, and is instead bringing the iPad’s specifications ahead of the iPhone’s to achieve stronger graphics processing that would be required if the new iPad Air does feature a higher resolution Retina HD display, as analysts have speculated.

New versions of the 9.7-inch iPads may come in a new gold color option, according to Bloomberg, in addition to the silver and gray that are available for the lighter iPad Air. The addition of a gold option would bring the iPad’s color palette into accord with the iPhone 5s, which features a silver or gold back for models with a white faceplate, and space gray for those with a black front.

Apple is expected to unveil the new iMac with Retina display — the company’s first Retina desktop computer. As 9to5Mac notes, Apple first launched the Retina display with the iPhone 4 in 2010, brought it to the iPad in 2012, and expanded it to the MacBook Pro later in 2012. As Ars Technica notes, it’s not clear what size the new iMac will be, though the current models are 21.5 inches and 27 inches. It’s unclear so far if we should expect multiple models, and it’s also unclear what resolution the screen will be. Ars Technica explains that, “Quadrupling the number of pixels in either the 21.5 or 27-inch iMac would give you a resolution of either 3840×2160 or 5120×2880. 9to5Mac has spotted references to 6400×3600, 5760×3240, and 4096×2304 screens in Yosemite betas. Any of that could be on the table.”

The release of OS X Yosemite and iOS 8.1

Based on the fact that Apple has been issuing “golden master” candidates for OS X Yosemite to developers and beta testers for several weeks, it’s clear that the release is almost finalized. Apple is likely to release the software on October 16, as it did with Mavericks last year.

Apple has also been testing betas of iOS 8.1 for weeks, and given the leak of the iPad user guide, it seems that its launch is imminent as well. The release will enable Apple Pay on the iPhone 6 and iPhone 6 Plus, as well as the Continuity features that will enable iOS and Yosemite to share data and function seamlessly together.

Other candidates for an update?

There’s no consensus on which of Apple’s other products could be up for a reboot at the October event, though a refreshed Mac Mini or Mac Pro could make an appearance. Neither the rumored Retina MacBook Air nor the Retina MacBook Pro are expected to appear. Likewise, the iPod line isn’t expected to see a refresh, and upgrades to the Apple TV set-top box are reportedly held up by negotiations with cable companies.