Why 5% of the Internet Uses an Adblocker 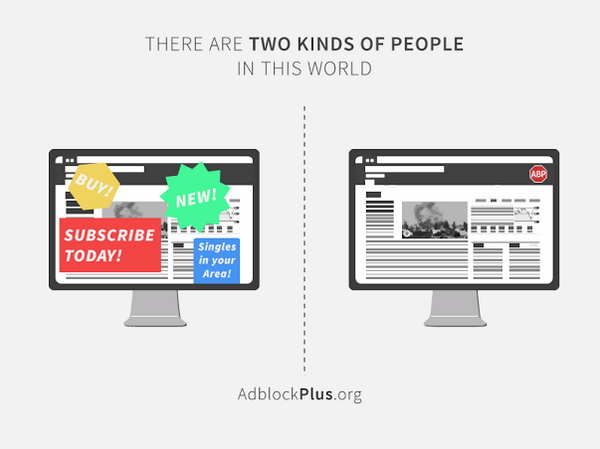 To combat pop-up windows, loud video ads, and heavily animated ad content, users are increasingly installing tools like AdBlock Plus, a popular ad blocker that spares them the constant exposure to poorly optimized and invasive ads that tax their computers and crash their browsers. Claiming that the favorite tool of ad-averse Internet users everywhere poses a serious economic threat to their businesses, two groups of French publishers are considering a lawsuit against AdBlock Plus creator Eyeo GmbH, according to Quartz. The plaintiffs would be the GESTE, an organization for editors of online content, and the French Internet Advertising Bureau.

GESTE is known for taking a strong stance against Google, and says that it is at the “legal consulting stage” of the potential lawsuit. As Quartz notes, the French Internet Advertising Bureau’s participation illustrates the group’s “failure to tame the excesses of the digital advertising market.” But in considering legal action against the creator of AdBlock Plus, an extension that enables users to “surf the web without annoying ads,” the GESTE and the French IAB fail to acknowledge that users install AdBlock Plus  because they don’t want to see the ads that have gone beyond “annoying” and jumped straight to “intrusive” or “invasive.”

Suing Eyeo would be a poor approach to solving the problem, and a refusal to acknowledge the facts of the situation. If publishers would instead look at how many people are using AdBlock Plus, and how their ads encourage Internet users to install AdBlock Plus and similar tools, they might begin to understand just how big of a problem the advertising world has created for itself.

How many people are using adblock tools?

While AdBlock Plus and others major adblock providers provide some insight into their plugins’ usage — AdBlock Plus says it has reached “over 300 million downloads” to become “the most popular browser extension” — broader data about how many people regularly use these tools has traditionally been hard to come by. PageFair, a Dublin-based startup that aims to “help websites survive the rise of adblock” and helps publishers measure the cost of ad-blocking, recently published a report called “Adblocking Goes Mainstream.”

Among the many facts in the 17-page PDF are several interesting statistics. In the second quarter of 2014, there were approximately 144 million monthly active users of the major adblock plugins globally. That amounts to 4.9% of all Internet users. This figure has increased 69% over the previous 12 months, and the number of adblock users more than doubled in 2013, and in fact went up 117%.

Google’s Chrome browser is a major driver of adblock growth, and as it captures mainstream browsing market share, the ease with which adblock plugins can be installed on the browser drives adoption up. The number of adblock users on Chrome almost doubled from the second quarter of 2013 to the second quarter of 2014, rising 96%. The report notes the irony of the situation for Google, a company whose “primary business is in online advertising; ironically, Google’s own browser appears to be bringing adblocking to the masses. “

Ninety-four percent of adblocking occurs on end-user installed browsers, such as Chrome, Firefox, and Opera, and usage is very low on pre-installed browsers like Internet Explorer and Safari. PageFair says this data demonstrates that while adblocking is becoming more mainstream, the “less technical demographic” hasn’t yet caught on.

How do ads encourage people to use AdBlock Plus and others?

Most users of adblock software said that they installed AdBlock Plus or another plugin because advertisements were interrupting their ability to view the content they intended to consume. Forty-five percent of adblock users don’t want to view any advertising, and want as many ads as possible removed from websites, while 17% cited privacy concerns as the reason they used a plugin. But 30% of adblock users were open to some type of advertising, and intrusive ad formats were the main reason they chose to block ads.

As PageFair notes, a combined 25% of adblockers installed an adblock plug-in due to concerns over performance and privacy, and an additional 30% use adblocking in order to remove a subset of specific advertising. Sixty-seven percent of adblock users expressed “some willingness” to view text and image ads, and reject only distracting ads with animations and sounds, or intrusive ads like popovers, interstitial ads, or non-skippable video ads. While the age group with the highest adoption of ad blocking usage (millennials) was the least likely to pay for an ad-free subscription to view content, many users aren’t against advertising in principle, but object to ad formats that make it harder for them to access content.

Quartz notes that AdBlock Plus creator Eyeo is anything but a selfless white knight. It acknowledges being paid by publishers who want to participate in its “Acceptable Ads” initiative and have their ads whitelisted through the extension, and declines to provide data on which web properties are large enough to pay and which fall into the “small and medium-sized” category, for which whitelisting is free. (And PageFairhas an advertising platform for ads that are endorsed by Adblock Plus.) According to some German websites, Eyeo has earned $30 million from big Internet players.

While it’s problematic for a single private company to police what is and isn’t acceptable for the entire world of digital ads, the explosion of questionable ad formats is a problem that media buyers, creative agencies, and organizations that oversee the ecosystem have yet to address. Consumers’ rejection of advertising, enabled by AdBlock Plus and other tools like it, does pose a threat to the ecosystem, but it should be up to publishers and advertisers to determine the best way forward, toward ads that will be less likely to drive consumers to turn on their adblock extensions.