Why Apple Is Already the Hottest Wearable Brand

There’s no question that the market for wearable technology will be rapidly expanding in the coming years. According to a recent report from market research firm CCS Insight, shipments of various smart wearables reached 9.7 million units in 2013 and will hit 135 million units by 2018.

While the overall category of wearable tech includes everything from glasses to cameras, the smartwatch market segment is expected to see especially vigorous growth. According to CCS Insight’s research, smartwatches will expand from approximately 25% of the wearables market this year to over half the market by 2018. That is good news for Apple, a company that recently unveiled its own wristworn wearable tech device that will make its debut sometime in “early 2015.”

While we won’t know for sure how successful the Apple Watch will be until it actually becomes available for purchase, a recent consumer survey conducted by independent market research company Ipsos appears to show that Apple already has a significant advantage over its competitors. In a survey conducted in October, Ipsos asked Americans what brand of wearable they would consider purchasing. According to Ipsos’s study, 62% of consumers said they would consider buying an Apple wearable, 44% mentioned Google, and 43% mentioned Samsung. Apple was by far the most commonly mentioned brand, despite the fact that it has yet to release a wearable device.

On the other hand, Google has already made inroads in the wearable market via third-party devices like Motorola Mobility’s Android Wear-powered Moto 360. Samsung, a company that has brought a half-dozen different smartwatch models to market since September 2013, garnered the least consideration among the top three mentioned brands.

Other brands mentioned by respondents included Fitbit (31%) and Nike (27%), two companies that have popular fitness-tracking bands on the market. While it may seem odd that a company with no wearables on the market would garner the most consideration from consumers, a closer look at the reasoning behind consumers’ choices offers some insight into why Apple was able to beat out its rivals. 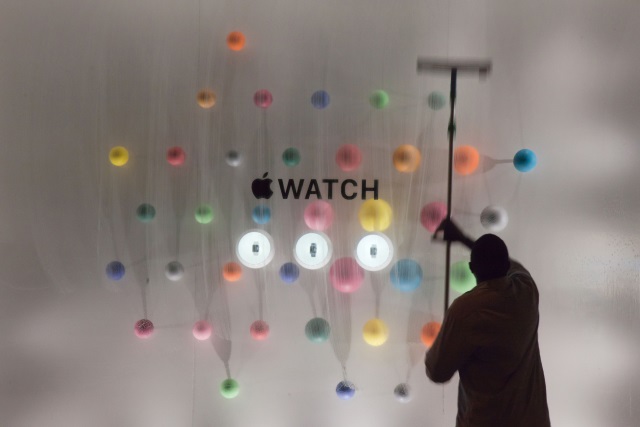 “In our study we’re seeing that there are two key characteristics influencing buyers when shopping in the wearable space,” said Ipsos MediaCT Vice President Julia Roland. “First, consumers are looking for a product that seamlessly integrates across devices. Easy connection and integration with smartphones, laptops and tablets is essential. With this, comes the issue of brand confidence and reliability. Seven in ten intenders indicate that they will only choose a brand they trust. In consumers’ minds, these top companies can deliver in both regards.”

By maintaining tight controls on all aspects of its hardware and software, Apple has a unique advantage over most other tech companies when it comes to seamless interaction among its products and services. Although Apple’s devices have always emphasized seamless interaction, the recent introduction of new Continuity features that allow handoffs between products has now made the overall experience even more seamless for Apple users.

Similarly, Apple has an advantage over its rivals when it comes to the perception of its brand. Interbrand recently named Apple as the world’s most valuable brand for the second year in a row. Thanks to the California firm’s well-established reputation as a premium device maker, consumers are ready to embrace the Apple Watch even before being able to get their hands on one.

Finally, Ipsos’s study revealed that 18% of respondents who are interested in purchasing a wearable want a device with both style and functionality. Apple has made it clear that it is positioning the Apple Watch as a fashion accessory rather than a tech product through an exclusive showing at Parisian fashion boutique Colette earlier this year, as well as an appearance on the cover of Vogue China, the Business of Fashion reports. While the entry-level Apple Watch will start at $349, the 18-karat gold Watch Edition models could cost thousands of dollars each and may appeal more to fashion-conscious consumers.

For all these reasons, Apple has been able to generate far more consumer excitement over its unreleased Apple Watch than smartwatch veterans such as Google and Samsung have been able to for their currently available devices. Based on the results of the study, it appears that Apple’s biggest problem next year could be manufacturing enough Apple Watches to meet consumer demand.