Why Banks Want You on Apple Pay, and How You’ll Benefit 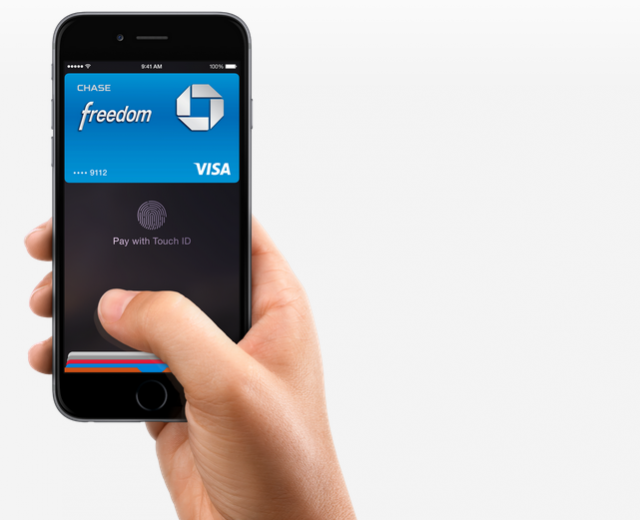 With the iPhone 6 revealed, the Apple Watch unveiled, iOS 8 imminent, and Apple Pay launching next month, banks and credit card networks have made a quick decision: Apple Pay could be a rousing success, and they want in. As The Financial Times reports, major U.S. banks have already begun an advertising battle to get consumers to use their credit cards with Apple Pay — and to set those cards as the default option in the new contactless payment system, which will launch for users of the new iPhone 6 and iPhone 6 Plus next month. The Financial Times notes that while “all the major banks have allocated large budgets to the battle,” marketing staff from the banks were expected to meet at Apple’s headquarters in Cupertino on Tuesday to receive “strict guidelines” on how they are allowed to advertise Apple Pay to their customers.

In Cupertino last week, Apple unveiled Apple Pay, a system that enables users to pay for their purchases with their iPhone using stored credit or debit card information that’s transmitted via the phone’s Near Field Communication antenna to the contactless reader installed near a store’s point of sale terminal. They can also use Apple Pay when shopping in partnering apps to avoid having to enter payment details or shipping addresses.

Major banks and credit card issuers are already beginning the campaign to get consumers to select their cards as the default choice in Apple Pay. Though they don’t yet know all of the details about Apple Pay’s functionality, the thinking is that it will enable customers to choose a default card, rather than flipping through a virtual wallet to select a card with each transaction. The thinking is that users are unlikely to change the default card often, or go through the slightly longer process of paying with a card that isn’t set as the default choice, so it’s in banks’ and issuers’ best interest to get users to select their cards as the Apple Pay default. It’s also worth noting that retailers pay higher fees when customers use credit cards than debit cards, so banks may accordingly incentivize the use of credit cards.

Kristin Lemkau, chief marketing officer at JPMorgan Chase, told the Financial Times that, “It’s a healthy competition.” JPMorgan Chase commissioned advertising materials well in advance, and Lemkau explained that, “We wanted to be first to have our creative about Apple Pay launched on our mobile app, on our website, in the 5,600 branches, on our ATMs, and on our Times Square sign. We were up that night.”

The firm is hardly alone in jumping on the opportunity. On its Apple Pay site, Apple lists American Express, Bank of America, Capital One, Chase, Citi, and Wells Fargo as participating banks, and also reports that participation from Barclaycard, Navy Federal Credit Union, PNC, USAA, and U.S. Bank is coming soon.

But what’s the real reason why banks are scrambling to get on board with Apple Pay, aside from an understandable desire to not get left behind? Some think that, given Apple’s influence on consumers and the tech industry, and the work that Google Wallet and Mastercard have already done in getting retailers to begin installing contactless payments infrastructure, Apple Pay is set to be quickly and widely adopted. Though each of those is certainly a factor, Ars Technica’s Megan Geuss points out that timing is an even more important one, as the launch of Apple Pay aligns with the U.S.’s transition to the EMV payment standard, set to begin in October 2015.

While fewer than 10 percent of merchants currently use NFC readers, U.S. merchants will be pressured to buy new point of sale terminals that support the use of more secure chip and PIN EMV cards — a standard used in Europe and Canada, but not yet in the United States — or bear the responsibility for fraud if they aren’t equipped with an EMV card reader. Almost all new terminals are equipped with contactless payment capability, which will only speed the adoption of systems like Apple Pay as another option for consumers who regularly use credit and debit cards.

In the short-term, it’s a benefit for both banks and for consumers that Apple Pay will enhance payment security with biometrically authenticated transactions, enabled with Touch ID. While Apple hasn’t specified exactly how the system will protect users’ information — aside from introducing the concept of the Secure Element chip that holds an encrypted Device Account Number to avoid storing credit and debit card numbers — MasterCard, one of Apple’s partners in launching Apple Pay, told Ars Technica that Apple Pay uses the contactless specification of the EMV standard to provide “industry-standard EMV-level security,” with card numbers “protected using standards-based payment tokens.”

Apple Pay will be the first to use this tokenization system in a widespread program, and banks and credit card networks hope that the launch portends a future payments system where they still hold a central place. Nathaniel Popper recently reported for The New York Times that the immediate cost of Apple Pay is expected to be absorbed by the banks, which are reportedly offering Apple a lower rate than they’d normally accept on credit card transactions.

The banks hope that they can make up for lower rates with a higher volume of transactions, or possibly processing transactions that are currently made in cash or other payment methods. Major credit card networks, on the other hand, don’t have to pay anything to work with Apple. Popper notes that some in the industry warn that Apple Pay could eventually push down the rates that banks and credit card networks can charge retailers. Those fees are often used to cover the cost of fraud, which is expected to go down with Apple Pay and its use of Touch ID.

Apple Pay also gives retailers another reason to upgrade its point of sale systems, so even if you’re opting out of Apple Pay, you’ll still benefit when stores gradually bring in new systems that are able to accept EMV cards. Consumers, retailers, and banks all benefit when they adopt technology that reduces the opportunity for fraud. Enhanced security, faster adoption of EMV card readers, and lowered potential for fraud are all important benefits of Apple Pay. While the system is still unproven, it has the potential to help effect changes in the payments industry that would make purchases faster, easier, and more secure. Whether you’re planning to use Apple Pay or not, that’s a future that should sound good to everyone.