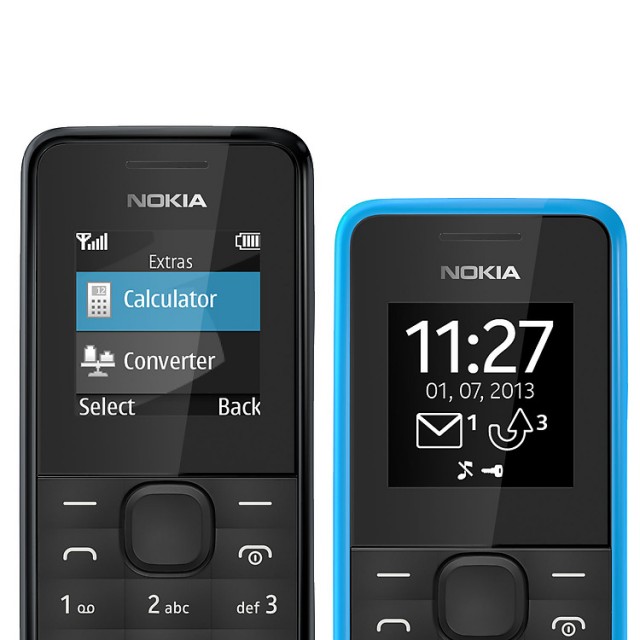 While a smartphone and all of its accompanying apps and features seems like the ultimate of modern necessities, millions of people still opt not to use a phone that affords them the convenience of the Internet in their pockets. Instead, for a variety of reasons — including lower initial cost, better battery life, cheaper monthly plans, enhanced privacy, or a more distraction-free lifestyle — they opt for a dumb phone. And yes, it turns out that companies are still introducing new phones that aren’t smartphones.

Microsoft recently released a new phone under the Nokia brand: one without 3G, LTE, or WiFi. The Nokia 105 also lacks a touchscreen and doesn’t support apps, and the only accessory available for the phone is an extra battery.  The phone costs $20 before taxes, and Quartz’s Leo Mirani projects that it will be “a massive success.” At the same time, Mirani asks, who would want to buy a basic phone without Internet at a time when every major tech company wants to bring the next million people online via mobile devices?

As Quartz reports, buyers of non-smartphones can be divided into three categories. First up is the buyer who’s new to mobile phones. That includes children in wealthier countries, the 300 million Sub-Saharan Africans expected to buy their first mobile phones in the next decade, plus first-time phone buyers in India, China, and Latin America.

The second category of non-smartphone is buyers who simply don’t want a smartphone. Whether “luddites or grandparents,” as Mirani writes, these shoppers would rather not be Facebooking, Tweeting, and consuming content on their phones. Even young phone owners don’t all favor the smartphone; Time last year interviewed a few of the millennials who don’t use smartphones,

The third group is comprised of people who need a second phone, perhaps one with better battery life for extensive travel, camping trips, or music festivals. More than a quarter of Nokia feature phone buyers purchase one as a second phone, which explains why Europeans buy as many feature phones as Latin Americans. This third category also includes a few “unlikely” members, such as tech execs and founders, journalists who keep old phones for travel, and people who use dumb phones as a status symbol indicative of their power to reclaim the time they’d otherwise spend keeping up with texts, calls, and emails.

Dumb phones and feature phones represent a shrinking market, and the market for non-smartphones shrunk by 14% between the first quarter of 2013 and the first quarter of 2014. While 590 million non-smartphones are expected to be sold this year, the number is projected to fall to 350 million by 2019. But for the time being, device makers still stand to profit from the sale of cheap and basic phones. Ericsson estimates that there will be 9.2 billion mobile subscriptions, and 1.4 billion of those will be non-3G subscriptions.

The huge market for non-3G subscriptions, Mirani reports, is hungry for more services. U2opia, a Singapore-based company with nearly 20 million users, enables dumb phones to connect to services like Facebook and Twitter without an Internet connection. A variety of financial services are targeted specifically to dumb phones, and Facebook has created ways for non-smartphones to access the social network and for advertisers to target these users specifically. Upstream, a mobile marketing and content company that sells apps for feature phones in emerging markets, records an average revenue per user in Brazil of about $6, approximately the same amount that mobile operators make from their customers.

Even in the midst of the smartphone revolution, the majority of the world still uses dumb phones. In markets like Nigeria, where 3G coverage is far from even and power is in short supply, mobile phone users need a phone that can last a week instead of a day. In such a situation, a dumb phone is a much better choice than a smartphone. However, in markets where connectivity is fast improving, a crop of ever-more-affordable low-end smartphones promises to continue to pull market share from dumb phones and feature phones.