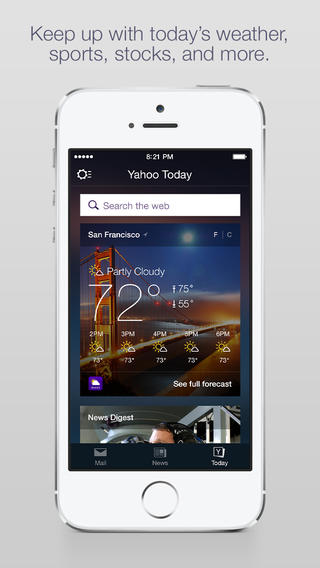 Yahoo (NASDAQ:YHOO) announced Wednesday that the company is releasing a new mobile app for iPhone and iPad users in a post on its official Tumblr blog. While it’s not unusual for a company to update its mobile apps every once in a while to add bug fixes or new content, this new Apple (NASDAQ:AAPL) version contains features not present in the current Android version available on Google (NASDAQ:GOOG) (NASDAQ:GOOGL) Play.

The new Version 3.0 in the App Store has News and Yahoo Today features in the update to the Yahoo Mail app released yesterday and are, as of Wednesday, exclusive to Apple devices that are capable of downloading the mobile app. The question is whether the new app is the first in a piece of exclusive content is one possible concept.

Yahoo and Apple have a good business relationship. The iPhone and iPad’s native weather and stocks apps are both Yahoo-based products. Yahoo has also been looking to worm its way further into the iPhone in its attempts to convince Apple to make Yahoo Search the default search engine on iPhone’s mobile web application Safari.

Both companies also have a rival in another Silicon Valley tech giant, Google. Google is Yahoo’s rival in many areas, including search, mail services, and Yahoo does not release any software that directly competes with iOS in the way that Google’s Android operating system does.

Apple is in the midst of legal action against Google. It is at the beginning of a new lawsuit against Motorola, a Google-owned smartphone maker. The old proverb about “the enemy of my enemy,” may apply here.

This could also be an early example of an exclusive app. While much of the push for platform-exclusive apps by both Apple and Android has been for video game apps, which tend to be both popular and profitable for the developer and app platform alike, the new Yahoo Mail app could be an iOS exclusive. It’s just a much less flashy and much more functional app than Plants Versus Zombies 2, which was exclusive for iOS users for two months before finally making it over to Google Play.

The irony of this decision is that the Yahoo Mail app is currently more popular on Google Play than it is on the Apple App Store, according to data from App Annie, a digital analytics firm. Yet, that could be a reason for the currently Apple — exclusive upgrade. It could be an attempt to boost its profile on the App Store charts.

Whatever the reason, the new app is here. The iOS version is similar to the Android version of the Yahoo Mail app in looks. The difference is when you want to see Yahoo News on Android smartphones and tablets, which requires either the Yahoo News App or the mobile app. On the iOS version, that can be done in app.