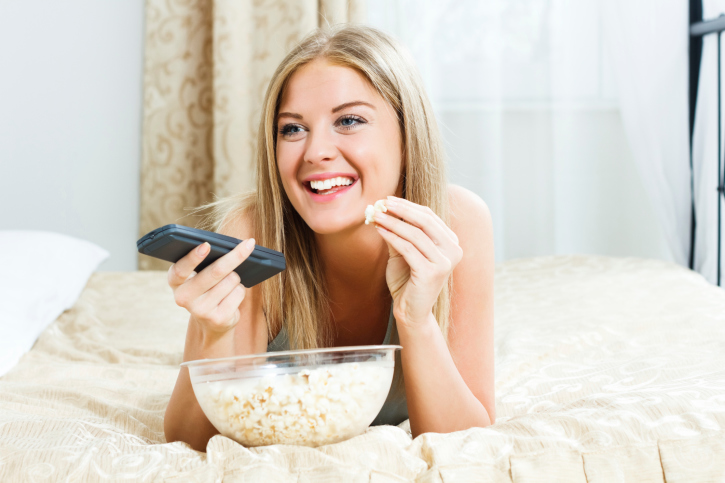 In the race toward envisioning the television platforms of the future, two famously mismatched competitors are looking to become more and more alike as consumers increasingly demand the combination of online subscription services with quality original programming.

On Wednesday, Netflix founder and Chief Executive Reed Hastings posted on Facebook that Netflix has passed HBO in quarterly subscription revenue. “Minor milestone: last quarter we passed HBO is subscriber revenue ($1.146B vs $1.141B),” Hastings wrote. “They still kick our ass in profits and Emmy’s, but we are making progress. HBO rocks, and we are honored to be in the same league. (yes, I loved Silicon Valley and yes it hit a little close to home.)”

Netflix’s subscription revenue was boosted by growth in subscribers from outside the U.S., and in July the company announced that it had reached the milestone of 50 million global subscribers, adding 1.69 million after the end of the first quarter, according to Forbes. International subscribers are an increasingly important part of Netflix’s ambitions, and the company expects to bolster its current base of 13.8 million international members when it launches in Germany, France, Austria, Switzerland, Belgium, and Luxembourg.

Earlier this year, Netflix announced the intention to raise subscription prices by $1 for new subscribers, enabling existing subscribers to keep their current pricing. But even with the pricing increase, the company continues to add new subscribers — and Netflix is still less expensive than the $15 or $20 that HBO adds to a regular cable package.

Over the same period that Netflix has seen rapid growth in subscriptions, HBO’s subscription figures have stayed about flat in the U.S., and subscriptions abroad have experienced only modest growth. But despite the ubiquitous comparisons of the two services, fundamentally, the two companies are very different. HBO is a television channel known for its original programming, and also offers an on-demand service called HBO Go, which users with a pay-television subscription can access online.

Conversely, as most people think of it today, Netflix is an on-demand service that rents fewer and fewer DVDs as users primarily stream content from its online platform. Its original programming represents a small but successful portion of its business.

HBO is more profitable than Netflix, making $548 million last quarter, compared to Netflix’s profit of $71 million. And that’s with fewer subscribers — estimated to be about 28.7 million compared to Netflix’s 50 million. However, as Quartz reports, Netflix has repeatedly noted that it considers HBO its top competitor, revealing the company’s ambition to be more like HBO.

Ted Sarandos, Netflix’s head of content, said in 2013, “The goal is to become HBO faster than HBO can become us.” And while HBO executives haven’t been exactly welcoming of the mismatched competition storyline, Mashable reports that Time Warner CEO Jeff Bewkes acknowledged Netflix, by name, as an HBO rival during Wednesday’s earnings call. “We think there’s an increasingly competitive and strong set of buyers out there, including Netflix,” he told investors on the earnings call after years of executives avoiding mentioning Netflix explicitly.

Netflix’s current popularity and success is linked in part to its original programming, which garnered 31 Emmy nominations this year. But that’s an area where Netflix has a lot of room to grow, especially in relation to HBO. HBO is far ahead as a content company, with hundreds of Emmy nominations under its belt, and growing licensing revenue from deals like its partnership with Amazon to license old HBO shows to the company’s rival to Netflix’s streaming service. As Netflix’s shows, like Orange is the New Black and House of Cards, gain momentum, Netflix will seek to follow in HBO’s footsteps to create quality television programs.

For its part, Time Warner is finally conceding the fact that Netflix is a competitor to HBO. Amid the speculation surrounding the possibility of a Time Warner and Fox merger, the idea of an on-demand streaming service that combines content from the two companies’ properties emerged. Such a service could have offered an extensive library for customers and stiff competition for Netflix.

While it seems that the merger isn’t going to happen, Bewkes said on Time Warner’s earnings call that the company might just build such a service on its own. Quartz reports that Bewkes told investors: “We’re trying to be best-in-class to have a platform that could not only deliver HBO networks but also Turner network and frankly other networks. Doesn’t have to just be ones that we own.”

While the company could bolster HBO Go’s current catalog by including content from not only HBO but also Turner and Warner Bros., its openness to adding content created by another networks sees it potentially taking a page out of Netflix’s book, from the days before it began producing its own original programming.

Quartz notes that HBO has hired a large number of software developers in Seattle, pointing to its dedication of new resources to its online service. That new attention is merited: The company has seen 35 percent growth in the number of active HBO Go users this quarter.

The Wall Street Journal recently reported that Time Warner is planning on expanding its experiments with a more Netflix-inspired model overseas. Though it doesn’t (yet) offer an HBO subscription to U.S. customers without a pay-television subscription, the company sells an online-only service in Nordic countries, and has since 2012. It’s looking to expand that program to markets like Turkey and Japan, where it doesn’t generate a large amount of revenue from licensing its programming but can reach a large number of potential customers with good broadband infrastructure.

Running the online service overseas could give HBO valuable experience in dealing with areas traditionally handled by distributors, like customer service, billing, and even marketing. That would be helpful if or when the company decides to launch an online-only service for U.S. customers.

In international markets, HBO has channels in 60 countries and licenses its programming to many more. The expansion of an online-only service could make sense for international markets, where arrangements with distributors aren’t as lucrative as they are in the United States. HBO’s wide profit margin in the U.S. is likely a strong reason that Time Warner has resisted the idea of an online-only service, but it seems an inevitable development as Time Warner acknowledges Netflix as a competitor.

An increasing number of Americans are opting out of traditional cable packages and weighing the options for online-only services, and it’s in HBO’s best interest to offer packages that will compete with Netflix for those customers.

As HBO and Netflix compete for popularity in what looks to be a long-term rivalry, each will try to subsume the other’s functionality. HBO still leads in profit and has been in the game of producing critically acclaimed content for much longer than Netflix. While a potential streaming platform by Time Warner could incorporate other networks’ content, Netflix is ahead of HBO Go in offering a staggeringly large range of programming.

Both are putting a strong foundation for international growth into place, and the push to embrace the future of Internet television will see each taking a page from the other’s playbook in order to develop into better, more comprehensive platforms — and keep up a healthy rivalry by making HBO a little more like Netflix, and Netflix a little more like HBO.