Here’s an important question for anyone thinking about playing Middle-earth: Shadow of Mordor: Does decapitating orcs sound like a good time to you? If you answered no, you can walk away now, because olive-green orc heads go flying left and right in this game. If you answered yes, pull up a chair to learn more — Shadow of Mordor could be right up your alley.

Dozens of video games have used J.R.R. Tolkien’s fictional world as a backdrop. Most of the recent ones have been based on Peter Jackson’s film trilogies, and they star Bilbo, Frodo, Gandalf, Aragorn, or any of the other characters fans know and love.

Middle-earth: Shadow of Mordor is different. While it’s set in the familiar fantasy world, it’s not based on a movie or book. It takes place during the time between The Hobbit and The Lord of the Rings and stars a new character named Talion, a man whose family has been killed by the evil forces of Sauron. Talion died in the assault, as well, but was quickly resurrected by an ancient Wraith, who binds itself to his corpse, granting Talion superhuman powers. Which, of course, he uses to exact revenge.

Your targets are the orcs and their Uruk captains. But thanks to the game’s “Nemesis System,” any random orc can rise through the ranks and become a top-tier villain, so long as he kills you in battle. See, there are no predetermined bosses in this game, and enemies remember their encounters with you. The orc hierarchy depends on a number of factors, but when one kills you, he gets a promotion and becomes more powerful.

By way of example, Polygon writes: “At one point, I defeated a smaller orc captain named Norsko of the Welts with a single arrow shot through his eye. The next time Norsko showed up, he had a metal plate over that same eye and promised revenge for the injury.” It gets to the point where, as several reviewers noted, you might actually feel bad once you kill an enemy, because you’ve come to know him by the time you deliver the final blow. 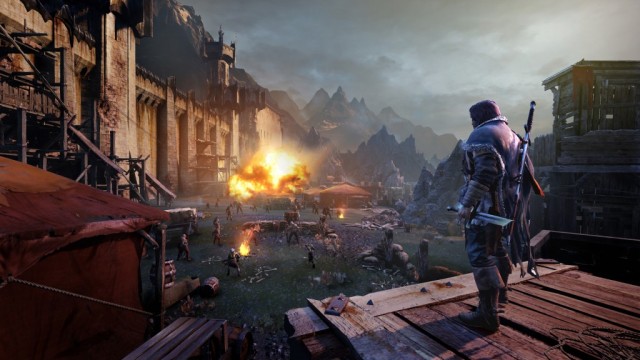 That’s all well and good, but if controlling Talion was a pain, it would be meaningless. Thankfully, the control mechanics function beautifully. Navigating the world of Middle-earth plays out like an Assassin’s Creed game, in that you can scale large buildings and leap from impossible heights without suffering a scratch. Parkour is the name of the game.

The combat, meanwhile, is clearly inspired by the Batman: Arkham games, with a focus on counterattacks and combos. But if you prefer to do your murdering in a stealthy fashion, you’re covered as well. Talion can perform quiet takedowns that help you thin the orc herd before you start chopping through the crowds.

Some reviewers wished the game didn’t borrow so heavily from the Assassin’s Creed and Batman franchises. But, as Kotaku writes, “If the harshest criticism I can muster against Shadow of Mordor is that it’s not a revolutionary or groundbreaking experience every single step of the way, though, then I think this game is in good shape.”

Overall, the reviews are very positive. Polygon writes, “Middle-earth: Shadow of Mordor provides a clearer road map for the next generation of AAA games than anything that has come previously.” GamesRadar adds, “Shadow of Mordor isn’t just the greatest Lord of the Rings game to date — it’s also one of the most entertaining open-world adventures around.” At the time of writing, Metacritic has the game sitting comfortably in “generally favorable reviews” territory, with a score of 84 out of 100.

Middle-earth: Shadow of Mordor comes out September 30 for Xbox One, PlayStation 4, and Windows. Owners of Xbox 360 and PlayStation 3, meanwhile, will have to wait until November 18 to play it. Reportedly, the Nemesis System in the PS3 and Xbox 360 versions will be a little dumbed down. If you’ve been thinking of upgrading to a current-gen system and you want to play this game, now might be the time to take the plunge.