Why the Apple Watch Didn’t Turn Out How Apple Wanted 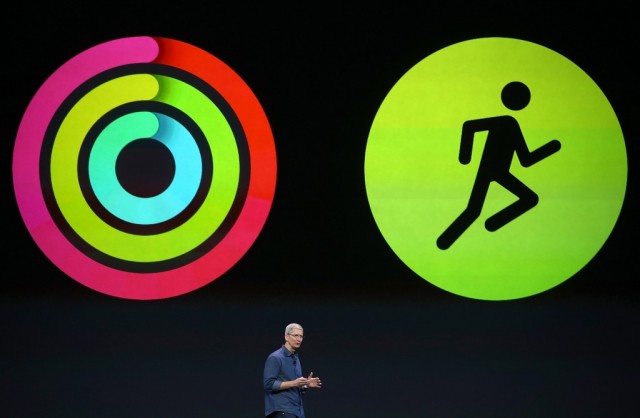 Apple began developing the upcoming Apple Watch about four years ago, with a clear focus on health and fitness. But the watch that the company will offer to consumers beginning this spring lacks the specialized sensors and features that Apple had hoped to include, and the advanced sensors of early rumors about the device were nowhere to be found. The Activity app that Apple did include on the Apple Watch will encourage users to “sit less, move more, and get some exercise,” and the watch will feature customizable coaching options to motivate the wearer. The only health-related sensors in the Apple Watch will be an accelerometer, to measure movement and steps, and a heart rate sensor to detect a user’s heart rate during a workout.

A recent report indicates that the development of the watch languished because much of the sensor technology intended for the wearable failed to meet Apple’s standards. Within the company, the project became known as a “black hole,” consuming resources, and technologies that showed promise didn’t work consistently, or ran the risk of necessitating approval from regulatory bodies. So Apple shelved these features for the first generation of the Apple Watch, and, as it prepares to bring the device to market, is struggling to define the watch’s “killer app” in the absence of the advanced health and fitness functions it wanted to deliver.

Why doesn’t the Apple Watch have a killer app?

Daisuke Wakabayashi reports for The Wall Street Journal that when Apple began developing its smartwatch, its executives envisioned a health-monitoring device that would measure blood pressure, heart activity, stress levels, and other metrics. But none of these technologies made it into the Apple Watch, which is set to debut in April. Sources tell Wakabayashi that some didn’t work reliably, others were too complex, and still others risked prompting “unwanted regulatory oversight” from the Food and Drug Administration or others.

Apple tested sensors that measured the conductivity of skin, a concept used in polygraphs as a measure of stress. The technology also showed promise for heart-rate monitoring, but the features didn’t perform consistently on some users, including those with hairy arms or dry skin. The sensors’ results also varied depending on how tightly the watch was worn, and Apple decided to scale back to simple pulse-rate monitoring.

The company also experimented with technology to detect blood pressure or the amount of oxygen in the blood, but there as well, efforts yielded only inconsistent results. Apple also realized that if it interpreted the raw numbers to offer any kind of health or behavior device, such a service would likely need the approval of the FDA, or of other regulatory bodies.

Will Apple struggle to find a purpose for the Apple Watch?

Because Apple cut these functions and features, it was left struggling with how to define the purpose of the Apple Watch, puzzling over the problem of why a consumer would want or need such a device. Wakabayashi characterizes the answer that executives came up with as “a little bit of everything.” They’ll display the Apple Watch as a fashion accessory, show users how glancing at the watch’s screen is more convenient than reaching for their phone, convince them of the merits of buying with Apple Pay, enable them to communicate with taps or heartbeats or drawings, and demonstrate how they can track their daily activity with the Apple Watch. Apple chief executive Tim Cook recently noted at an investor conference, “One of the biggest surprises people are going to have when they start using it is the breadth of what it will do.”

Some think that the Apple Watch has the potential to drive growth and ease Apple’s dependence on the iPhone for profits. For Cook, it also represents an opportunity to prove that the company can still deliver the same kind of “breakthrough products” for which late Apple co-founder Steve Jobs was known. But as The Wall Street Journal notes, the wearable faces an array of challenges, most notably its dependence on the iPhone, which, by nature, makes it an accessory to a much more capable device. It may struggle with its position on the line between jewelry and consumer electronics. Apple will produce a wide range of watches at different prices, from a $349 model to high-end versions expected to surpass the $4,000 Mac Pro and rank as one of Apple’s most expensive products to date.

Will the lack of a killer app hurt the Apple Watch?

Marketing the Apple Watch will be a much more complex endeavor than promoting past Apple products, as Wakabayashi points out. The iPod enabled users to carry their music collections in their pockets. The iPhone combined the mobile phone with the power of the Internet and a revolutionary new touchscreen. The iPad was a simpler way to browse the web or watch videos. Despite the absence of such a clear narrative for the Apple Watch, analysts expect that the brand’s appeal and its base of loyal customers will make the watch a success.

Sources “familiar with the matter” report that Apple is asking suppliers in Asia to make 5 to 6 million Apple Watches in the first quarter, and one of these sources said that half of the first-quarter output will be for entry-level Apple Watch Sport models, while a third will be for the mid-tier model, which features a stainless steel casing and a sapphire crystal cover over the watch face.

The Wall Street Journal points out that the figures would be on par with Apple’s last major new product launch, as the company sold 7.5 million iPads in the first six months after they hit shelves in April 2010. Additionally, such output would far outpace the production of wearables from Samsung, LG, Sony, Motorola, and others, with research firm Canalys reporting that just 720,000 smartwatches powered by Android Wear shipped in the last six months of 2014. ABI Research estimates that Apple will sell 11.8 million Apple Watches in 2015 and account for nearly half of all wearable device sales, a category that also includes fitness trackers and non-Android smartwatches. Nick Spencer, an ABI analyst, posits that “People have left the door open for Apple. The others haven’t done a great job here yet.”

Many expect that Apple’s power to attract millions of users to a new type of device will drive developers to create apps that will boost the appeal of the device and ease the burden of delivering a killer feature from the beginning. J.P. Gownder, an analyst at Forrester Research, thinks that the idea of there being a killer app is irrelevant. “This whole notion that there needs to be a killer app in an Apple product just isn’t true,” he said. “For different people, different things will pop.”

Apple Insider’s Mikey Campbell points out that Apple seems to be investing in health devices and programs, as evidenced by recent job postings. While the first-generation Apple Watch will take a mainstream approach, Wakabayashi notes that more advanced health-tracking features may be included in future generations of the device. It remains to be seen how important health features are to consumers, though their potential was certainly one of the most exciting aspects of the early rumors around the device’s development.

It will also be interesting to see whether Apple’s decision to avoid features that would necessitate regulatory oversight was a misstep. Apple is already introducing HealthKit into top hospitals, and a medically-approved wearable could play an important part in the development of that ecosystem.