Why the Next iPhone May Have an Even Better Camera 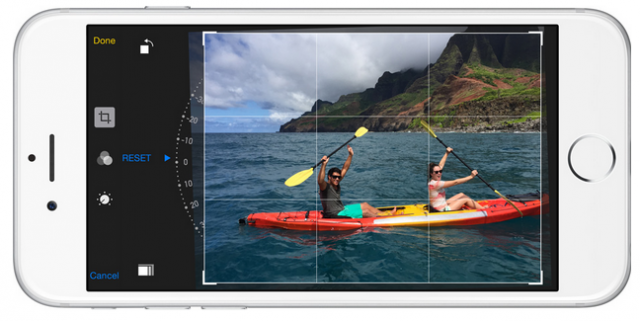 The iPhone is already the world’s most popular camera, and it seems that Apple will work to keep it that way with a new and improved camera for future generations of the iPhone. Apple Insider reports that the company was granted a patent for a new type of camera sensor that could dramatically improve the accuracy with which the iPhone’s camera captures colors and the way it performs in low light.

Apple was granted patent no. 8,988,564, for a “Digital camera with light splitter.” The patent describes a camera system that uses a light-splitting prism to to parse incoming rays into three color components, each of which are captured by separate sensors. Quartz explains that the cameras in most smartphones use a single light sensor, overlaid with a color filter array (CFA) split between red, blue, and green and laid out in a grid. When the sensor captures an image, it needs to reconstruct the image based on the color samples from the filter, through a process called demosaicing. Quartz notes that this leads to images that are blurrier than in real life because the sensor can only pick up colors where they are in the grid.

So Apple’s newly-patented system uses a cube of triangular prisms to split light out into separate, green, red, and blue streams. Each of these is picked up by an independent sensor, which would result in images that are more true-to-life in color. It would also make photos that are taken in low-light situations more clear. Light splitting systems don’t require color channel processing or demosaicing, and thereby maximize pixel array resolution.

For the splitter assembly detailed in the patent, Apple describes a cube arrangement of four identical polyhedrons that meet at dichroic interfaces. Each interface uses a specific optical coating to enable particular wavelengths of incident light to be reflected or to be transmitted to an adjoining tetrahedron. Aside from RGB, the patent also allows for other color sets like cyan, yellow, green and magenta (CYGM), or red, green, blue and emerald (RGBE). The patent is an extension of an Apple invention that uses mirrors and optics to achieve optical image stabilization without using up valuable space.

TechCrunch notes that this would be a much more expensive technology to implement than the current iPhone camera system. Its component parts would likely take up more space inside the phone — something that Apple typically wants to avoid, as it prioritizes thinness when it designs the next generation of the iPhone. But more accurate colors and better low-light performance could balance out those drawbacks, especially if Apple can minimize the size of the sensor system to fit the system into as thin a form as possible.

Of course, it’s not clear whether Apple will implement a light splitter in its next or future iPhones, but the company is working to keep the iPhone at the forefront of mobile photography. With the iPhone 6 Plus, Apple introduced an OIS system designed to produce sharp images even in low light. Apple’s current print advertising campaign for the iPhone 6 and iPhone 6 Plus highlights photos that are “shot on iPhone 6.” In the App Store, Apple has promoted a selection of “amazing photography apps” under the same shot on iPhone 6 tagline, and has featured a gallery of users’ photos on its website.

Apple has continually pushed its iPhone cameras further with each generation of the smartphone to ensure that they remain ranked among the best smartphone cameras available. According to Flickr’s statistics, the iPhone is the most-used camera in the world. Flickr analyzed the EXIF metadata of photos shared on its platform to find out which cameras were the most popular among its users, and for several years Apple’s iPhones have been the cameras most frequently used by Flickr members. The most popular cameras in the Flickr community over the past year are the iPhone 5s, the iPhone 5, the Samsung Galaxy S4, the Galaxy S5, and the iPhone 6.

Apple wants to cement the iPhone’s reputation as one of the best smartphone cameras on the market, and is likely to continue upgrading the camera in each successive generation of the iPhone to keep it competitive.