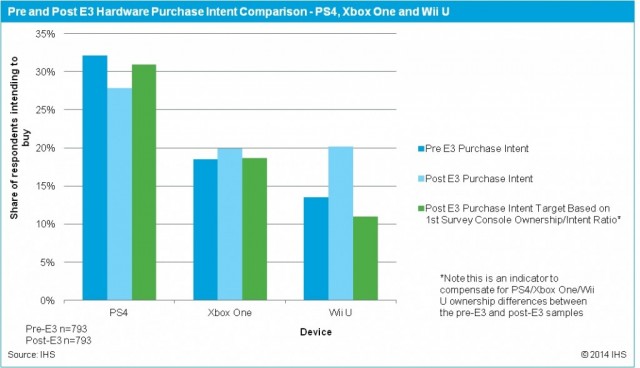 Nintendo’s approval ratings among hardcore gamers and consumers have taken a meteoric rise, and the company has its performance at E3 2014 to thank for that. GameIndustry.biz has released a survey showing purchase intent on Nintendo’s Wii U system pre- and post-E3 (1,000 of those surveyed were considered hardcore gamers). It now shares about the same amount of interest as the Xbox One (around 20 percent), while the PlayStation 4 still has the lion’s share of buyer intent (over 25 percent).

The PS4 still leads the market in global hardware sales, according to VGChartz, with 8.7 million sold. The Wii U has been out longer than the PS4 and Xbox One, and comes in second, with 6.7 million sold; the Xbox One brings up the rear with 5 million sold. Nintendo reported a loss last quarter ($73 million compared to $79 million year-on-year), which ended on June 30.

The company owes this loss to having only one major software release, Mario Kart 8, but Nintendo will likely see improvements since it announced its release schedule at E3 2014. Wii U hardware and software sales are predicted to improve with the release of big-name exclusives like Super Smash Bros. Wii U, Hyrule Warriors, Bayonetta 2, and Wii Sports Club.

Nintendo’s Wii U has the strongest exclusive video game lineup this holiday season compared to PS4 and Xbox One. In the next few months, PS4′s big exclusives include LittleBigPlanet 3, DriveClub, and Infamous: First Light, while the Xbox One boasts Sunset Overdrive and Halo: The Master Chief Collection. But while the Wii U has more exclusives, the PS4 and Xbox One have more games available come holiday season than the Wii U.

Big titles like Destiny, Dragon Age: Inquisition, and Evolve are all available on Xbox One and PS4, with no intention of seeing a release date on the Wii U. But it’s hard for gamers old and new to turn down classic favorites like Mario and Zelda. Not to mention that the Wii U’s base price of $250 combined with its newfound software support will be a big draw for parents this holiday, compared to the Xbox One and PS4 each costing $399. Nintendo also has a more familiar library: more people are interested in Super Smash Bros. versus Halo: The Master Chief Collection. The former is already being touted as the biggest-selling console exclusive of this holiday.

Nintendo’s Wii U doesn’t just have holiday 2014 — future exclusives have already been promised. Popular IPs pepper 2015 offerings for the Wii U, including Zelda, Splatoon, Mario Maker, and Kirby and the Rainbow Curse. Xbox and PlayStation don’t have the same exclusive draw: Halo and Uncharted are the big names floating around for 2015 release.

Because of the lack of big-name exclusives between Xbox One and PS4 to draw interest, Nintendo may also see many gamers picking up a Wii U in addition to an already purchased Sony or Microsoft system. By the end of the fiscal year (March 31, 2015), Nintendo intends to ship 3.6 million units, according to VGChartz. Its wish may come true if hardcore gamers intend on doubling up on systems to balance out their video game library and other consumers interests are piqued enough.