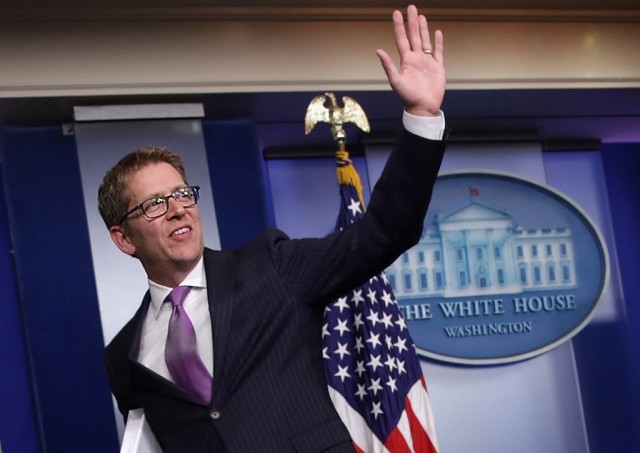 Apple (NASDAQ:AAPL) is still interested in hiring former White House Press Secretary Jay Carney as the iPhone maker’s next public relations chief, according to Bloomberg. The rumor of Apple’s interest in Carney first emerged last week, when Re/Code mentioned that Carney’s name was “being bandied about for the other big job opening in tech PR, at Apple.”

However, doubt was cast on Re/Code’s report when well-connected Apple watcher Jim Dalrymple dismissed the rumor with one of his typically pithy responses. “Nope. Tim Cook has never even met Jay Carney,” wrote Dalrymple on his blog The Loop. While Dalrymple has a fairly good record when it comes to dispelling inaccurate Apple rumors, Bloomberg’s latest report cited “a friend of his [Carney’s]” as the source for the story.

It should also be noted that while Carney has not confirmed that he has talked to Apple about a job, he hasn’t denied it either. “I’m talking to a lot of different people about a variety of potential opportunities,” wrote Carney in an email obtained by Bloomberg. While it shouldn’t be surprising that a former White House Press Secretary would give an ambiguous answer to a direct question, the email does appear to leave open the possibility that the rumor of an Apple job offer is true after all.

Apple has been without a vice president for worldwide communications ever since longtime PR chief Katie Cotton retired from the company in May. During many her eighteen years at Apple, Cotton worked closely with legendary CEO Steve Jobs and helped cultivate Apple’s image of mystique by being notoriously reticent with the press.

As noted by Bloomberg, Carney first joined President Barack Obama’s administration when he became director of communications for Vice President Joe Biden. He previously worked as the Washington bureau chief for TIME magazine. Carney replaced former White House Press Secretary Robert Gibbs in early 2011 and served in that capacity until he resigned on May 30, 2014 and was succeeded by Josh Earnest.

While it is still unknown if Apple is reaching out to Carney, the rumor would align with a report from Re/Code last month that suggested Cook was looking at “high-profile external candidates” to fill the position of vice president for worldwide communications. If Carney does take a job with the Apple, he would not be the first former Obama administration member that the Cupertino-based company has hired. Last year, Apple hired Lisa Jackson, the former Obama-nominated Administrator of the Environmental Protection Agency (EPA) as the company’s vice president for environmental initiatives.